Danish election will change everything 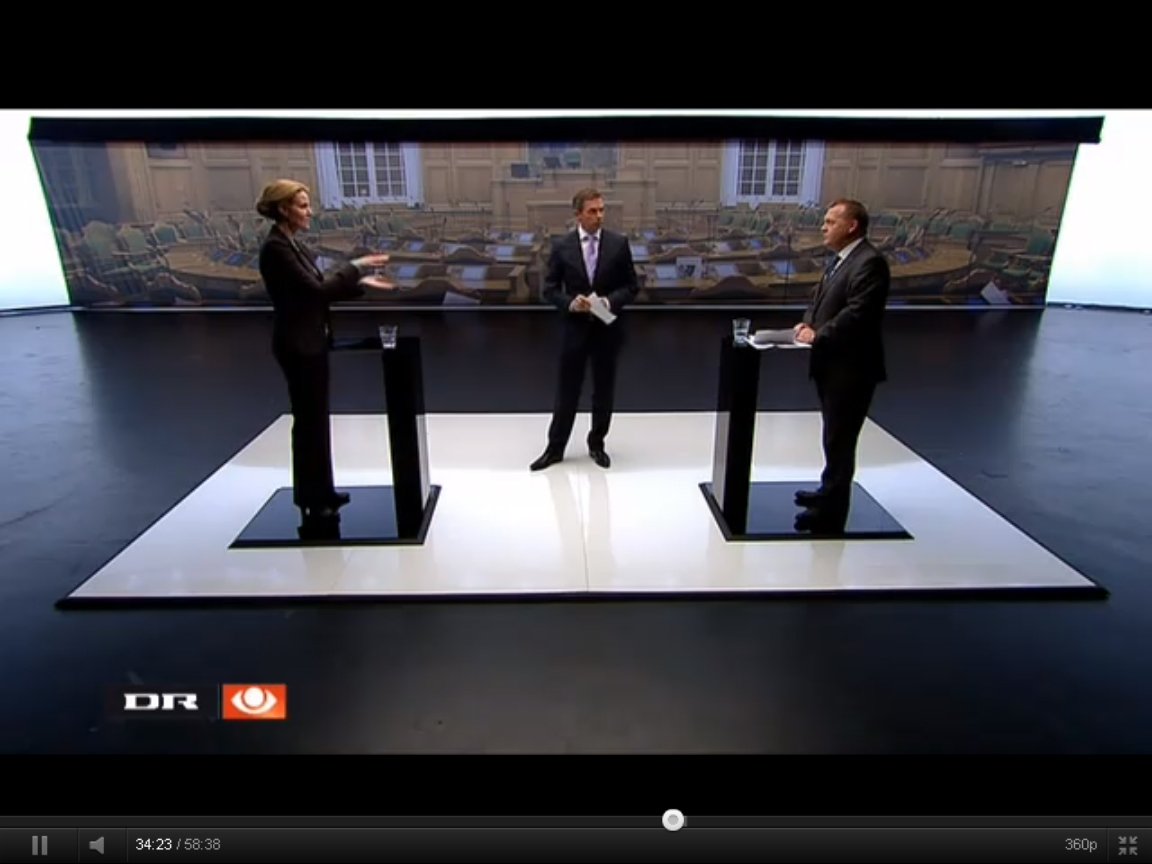 Helle Thorning-Schmidt (left), Social Democrat, and Lars Løkke Rasmussen (right), Liberal Party at a political duel on Danish national TV station DR. They are both aspiring to be the next Prime Minister
image: Screenshot of DR election duel

No matter what happens Thursday, Danish politics will never be the same. This was the experts’ judgement at a University Post / Seven59 election briefing of students, researchers and diplomats

Like in a big sporting event, it is all about who is going to win: Thursday it will be either red bloc or blue.

But for analysts and observers, the most interesting thing is the internal division of power within each bloc. This became clear to students, researchers, diplomats and expats who chose to take part in the University Post /Seven 59 pre-election briefing Wednesday at the University of Copenhagen.

»No matter what happens, change will occur«, explained Yosef Bhatti, a University of Copenhagen PhD fellow in political science, in his presentation to the assembly.

Surprise: Immigration NOT on the agenda

The polls say that the red block led by Social Democrat leader Helle Thorning-Schmidt will oust the blue bloc from power. But even if the blue bloc maintains government power, it will be dependent on the Liberal Alliance, and less on the anti-immigrant Danish People’s Party.

Another big issue, according to Yosef Bhatti, is whether or not blue bloc votes are wasted on the Christian Democrats that don’t get past the two per cent election threshold anyway.

The election campaign of 2011 has been the first election since 1998 in which immigration policy has not been on the agenda, according to Yosef Bhatti.

There are a number of reasons for this: In the midst of economic recession, there are other more salient issues to discuss, and there is real political disagreement between the blocs.

Other speakers at the event were Howard Knowles, editor of the news service Seven59, who talked about how the Danish multi-party system was not conducive to sweeping political reform. Mike Young, Editor of the University Post, used readership statistics on UniversityPost.dk to show how Danish politics are perceived by international students and staff.

In recent Danish political history, there have been places where parties suddenly gain or lose massive support in the polls. Polling analyst Lasse Hjort Madsen calls them tipping points, and has looked into what they are about.

Tipping points are characterised by a sudden 3.5 per cent point change which is subsequently confirmed in consecutive polls.

He has looked into what is the cause of the sudden gains and the loss.

»For gains it is the confluence of a trademark personality, what I call a killer message, a supporting political context, extensive media coverage and perfect timing,« he explained.

No sense of betrayal

For a sudden drop in support, Lasse Hjort Madsen has only one explanation: »It is what I call ‘a sense of betrayal’,« he says.

An example was when the previous Prime Minister Poul Nyrup-Rasmussen suddenly withdrew his party’s support for the early-retirement scheme in the 1990s, with a catastrophic loss in the polls and subsequent election defeat as a result.

For Lasse Hjort Madsen, the present election campaign has so far shown no tipping point, but a slower long-term change.

»The only thing that remotely reminds you of a tipping point is that Helle Thorning-Schmidt may become the first Danish woman Prime Minister. But her opponent Lars Løkke has not ‘betrayed his voters’,« he says to the University Post.