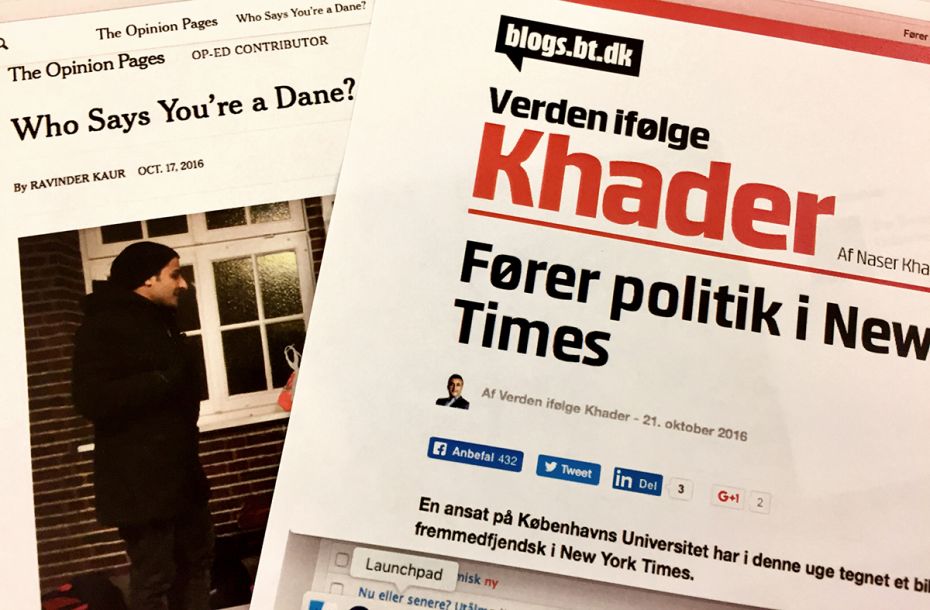 The two pieces in the New York Times and on the Danish news site BT
image: screenshot of news sites NYT and BT

Do researchers have the right to express their critical view of Danish politics in international media? This is the question raised by MP for the Conservative Party Naser Khader in his blog The World According to Khader in tabloid BT (in Danish).

Khader’s post with the title ‘Doing policy through the New York Times’ is a critique of associate professor at the University of Copenhagen Ravinder Kaur, who wrote a feature on Danish immigration and refugee policy in October that was published in the New York Times.

Ravinder Kaur, who is Associate Professor of South Asian Studies, interprets in the featured article a current Danish controversy about when you can call yourself ‘Danish’.

This controversy was recently ignited when Danish People’s Party (DF) MP Martin Henriksen on the Danish TV station DR2 refused to recognize an 18-year-old student class representative with Iranian roots as a ‘Dane’.

“Some hear in this an ominous echo of Germany’s late-19th-century romance with “blut und boden” (blood and soil) as the marker of national identity,“ writes Ravinder Kaur in the New York Times, referencing an opinion piece by journalist Martin Krasnik in Danish newspaper Weekendavisen 30 september 2016 which connects the Danish People’s Party’s criteria for Danishness with the politics of Karl Lueger, an anti-Semitic mayor of Vienna at the turn of the past century.

Kaur also criticises the Danish notion of a ‘refugee crisis’, despite the fact that Denmark has accepted fewer refugees than several other OECD countries, both in absolute and relative terms. (Seven European countries received more refugees per million inhabitants than Denmark in 2015. In absolute terms, Denmark received 1.7 per cent of all asylum seekers to Europe in this year, according to Eurostat).

Strange criticism in NY Times, not on local news sites

Part of Naser Khader’s post is a critique of Ravinder Kaur’s description of Danish policies on refugees. But he also asks a more fundamental question:

“I simply do not understand that you as a resident of Denmark want to draw a picture of our country as being particularly xenophobic, when this is not the truth,” writes Khader, who is Conservative spokesman for integration, immigration, foreign affairs and human rights.

He also criticizes the fact that Ravinder Kaur let her criticism of Danish conditions be published in the New York Times, rather than in local media.

“And I find it a bit strange that Ravinder Kaur, who works at the University of Copenhagen, chooses to draw such a gloomy picture of Denmark in the New York Times before she (as far as I can see) has let her opinion be known on a Danish news site. She has a political agenda.”

Khader points to the fact that Ravinder Kaur is employed at the University of Copenhagen three places in his text.

On Naser Khader’s facebook wall a large number of people express their sympathy for Khader’s message, and a few of them take the information about Kaur’s employment at UCPH and complain that she even has her job.

“I hope that Ravinder Kaur is ONLY Associate Professor / Head of Centre (Department of Cross-Cultural and Regional Studies) on a VERY short term contract,” writes one, while another facebook commentator calls it “an outrage that a person [Ravinder Kaur] is professor”. A third calls on Ravinder Kaur to leave Denmark. More specifically to travel to Turkey, “so she does not feel she is the subject of discrimination.” Ravinder Kaur was born in India.

Naser Khader comments a few places in his thread, but does not express an opinion on whether Ravinder Kaur should be removed as associate professor.

Ravinder Kaur says that she finds the debate on Naser Khader’s Facebook wall uncomfortable. And she wonders why Naser Khader highlights her work and position three times in his blog.

“It was an editor at The New York Times, who invited me to write about the latest debate on national identity in Denmark,” Ravinder Kaur says to the University Post. “It is normal in other parts of the world that researchers as ‘public intellectuals’ reflect and offer their take.”

She also says that it is normal practice in the NY Times that opinion writers appear with name and affiliation – in italics at the bottom of the article – and that it is not a piece of information she has asked to be included.

“I cannot understand why he mentions my place of work three times in his blog, without this information having any special relevance,” says Ravinder Kaur. “He is insinuating that I have some kind of hidden agenda.” She says that she finds it ironic that Naser Khader’s key issue is the freedom of speech. “Do we need self-censorship?” Ravinder Kaur says jokingly.

We wanted to ask Naser Khader questions about the case

Naser Khader has just participated in a debate on the freedom of speech following the release of a book by former foreign affairs editor of the Danish news site Jyllands-Posten about the years after the Muhammad cartoons. Rose writes in his book about being forced to remain silent in the debate about religion and freedom of expression by the parent company’s executives, while Jyllands-Posten outwardly upheld the pretense that it was a bulwark of free speech.

Here Khader expressed his support for Rose, which he on another news site Information calls “the leading voice” in the debate on freedom of speech in Denmark.

“If we all get scared and shut up instead of doing what we think is right, we have lost,” Naser Khader writes in Information.

The University Post contacted Naser Khader by phone and e-mail for comment, but he did not reply to inquiries.
We would have liked to ask him why he thinks that Ravinder Kaur should have written her piece in a Danish news site rather than a major media outlet likeThe New York Times. We would also like to have asked him to comment on why he several times in his blog highlighted the fact that Ravinder Kaur was associate professor at the University of Copenhagen. And finally, whether, in his opinion, it is OK for a public employee to gives her critical opinion on Danish immigration policy and to make the Danish debate on ‘Danishness’ available to the outside world.