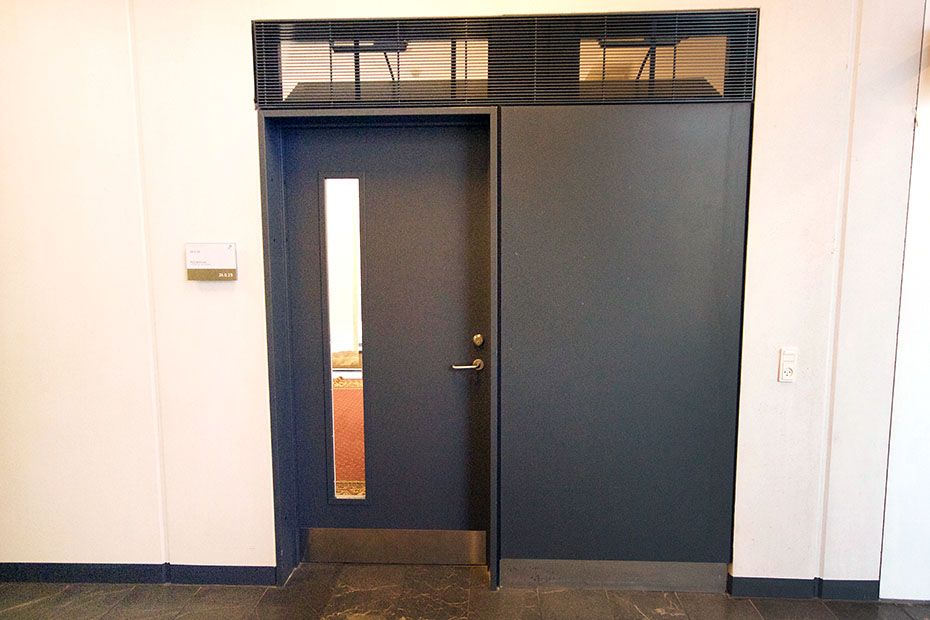 Muslims should not have spaces made available to them in public buildings in Denmark, says MP Marie Krarup, who claims an interfaith 'retreat room' on South Campus, KUA is 'really Islamic’.

In some public buildings, including a few places at the University of Copenhagen, there are rooms designated for prayer, meditation or silence.

These rooms should be shut down if Marie Krarup, a member of parliament for the Danish People’s Party, has her way.

Tuesday, 13th December, she called Minister for Higher Education Søren Pind in for parliament consultation. He should answer her on how he will ensure that Danish educational institutions offer “an environment where there is intellectual freedom, and which do not give special rights to certain ideologies or religions, like in the settung up of prayer rooms.”

“The prayer rooms are actually Islamic. We never had prayer rooms in Denmark before the Islamic immigration. Why should we?” Marie Krarup explains in an email to the University Post.

The consultation is, according to the question text on the parliament website, prompted by an article in Jyllands-Posten about another prayer room at the University College UCC, but subsequently Marie Krarup has expanded the discussion to also include the University of Copenhagen.

On Facebook, Krarup states that she herself has been on a campus trip – and put up the pictures of the KUA prayer room on South Campus. The room’s official title is ‘retreat room’ and it is in building 24 in a remote corner of the KUA complex.

From Marie Krarup’s Facebook page (announcement on Tuesday morning had over 500 likes, and an almost identical posts by Krarup without photos had about 1,000)

The retreat room was set up at KUA in 2004 at the request of a small interfaith student network ‘Across Faiths’ and the former student priest Hans Anker Jørgensen. ‘Across Faiths’ consisted at the time, according to the University’s notes from the period, of 11 students (Christians, Muslims, one Jew, one Taoist and a trainee in meditation). Two of the members were known imams Sherin Khankan and Fatih Alev, and the circle also included the former chairman of the students congregation in Amager, Jon Bojsen Kværndrup.

The interfaith initiative has not been a severe drain on the UCPH treasury (although the square metres, of course, have a cost). The group applied for the opening of the retreat space 12 years ago and a total of DKK 2,750 for carpets, furniture, curtains, etc. in addition to the holding of a reception.

They got DKK 2,000 from UCPH. Both the Panum Institute and the CSS campus buildings have similar facilities – CSS uses the term ‘silence room’.

Thought it was for Muslims

The University Post took a trip out to the retreat room at KUA on Monday afternoon, shortly after noon.

KUA’s building 24. Its retreat room is behind the first door on the right

You can look into the room through a narrow window in the door, a young man is praying in there.

When he comes out, he says that he is called Fatih and is studying at CBS but sometimes does his reading at KUA. As he is a Muslim, the room is convenient for him to do his daily prayers.

A young guy with a Danish appearance trudges past. He does not use the retreat room, he says. “I thought it was for the Muslims, so they have a place to pray.”

It is Muslims, in particular, that we meet during our brief stay at the retreat room. Two young women, Signe and Hafsa, show us around the small room.

There is a woven carpet on the floor in addition to some cushions and a small pile of mats that can be used for meditation. On a few shelves there are a variety of religious and philosophical texts from a variety of religions, including a single, untranslated Quran. Signe and Hafsa say that they sometimes pray in the room, while a man sits on his mat meditating. Then they just share the space.

On the bulletin board there is, in addition to a prayer guide in Arabic (which Marie Krarup photographed for her Facebook posting for five disapproving smileys), an advertisement for an Islamic psychologist, a bulletin from the Muslim student organization Muslim Student Association, notes from a Catholic organization, a (not visibly religiously-affiliated) coach and two entries from Bible study groups. There is also an advertisement in Turkish for a Turkish-Islamic cultural association in Vesterbro.

The bulletin board of the retreat room

On the table is a guest book with greetings from visitors of different religious persuasions.
Even though Islam has a certain ascendancy on the bulletin board, there is nothing to indicates that other faiths do not also use the room – if nothing else then certainly to draw attention to their activities.

MP Marie Krarup also noticed that there were several religions represented. But she does not accept the room’s stated goal of being interfaith:

“I myself have been in the KUA prayer room – see my photos on FB. They take a lot of trouble to make the room seem like it is interfaith. But it seems superficial. Why would Christians need a prayer room? What would we use it for?” she writes in her mail to the University Post. It continues:

“If you want to pray as a Muslim, you should do it unnoticed or at home. It does not need a room made available to you in a public building in Denmark. Denmark is a Christian country, not an Islamic one. We must do everything we can to stop the Islamization of Denmark. For Islam is equal to non-freedom. Islam is the opposite of everything that Denmark is based upon.”

Why the retreat room issue, after 12 years?

While we talk, a third young woman comes in. She prays, it only takes a moment.
The newcomer is called Madiha, and she studies English at the University.

“I don’t understand the problem. The room has been available since 2004, that is 12 years, why should it be a problem now?” she says.

“It will not be locked when we pray – anyone can enter. Sometimes someone has been in here reading. Then we pray on the other side of the room.”

Signe, who studies Middle Eastern studies and Arabic, does not accept the premise that the retreat room is only for Muslims.

“As you saw on the shelf, there were different books, both religious and non-religious,” she points out. “It is a multi-faith room. That’s just how it is. That is why it is called retreat room.”

“There is enough space for everyone to have their corner and do what they need to do, without disturbing others,” says Madiha.

The University Post asked the Ministry of Education for comment before the meeting Tuesday, but the Ministry has not replied. The consultation can be found in the Danish parliament’s online archive.