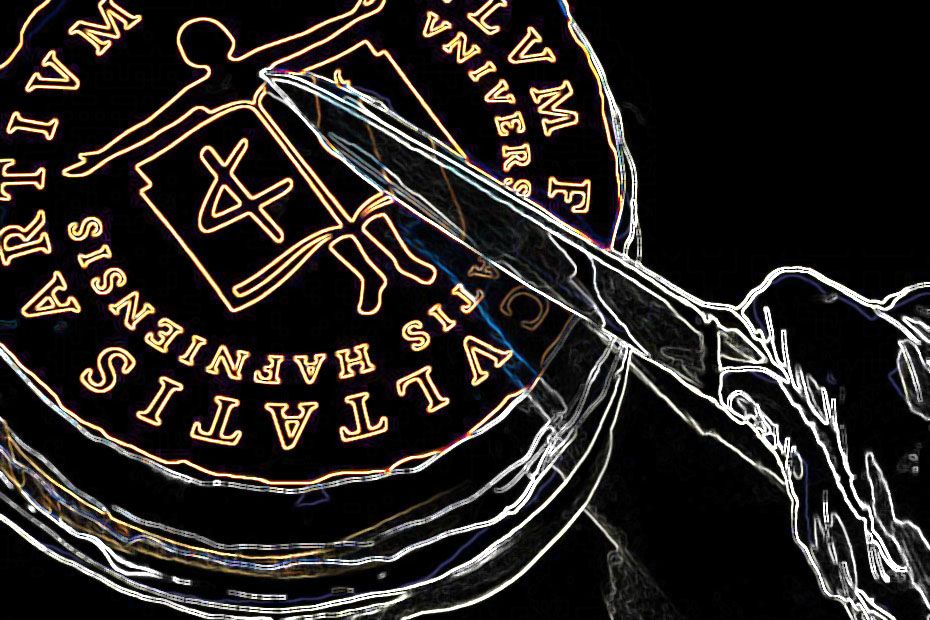 Humanities to do it all again. The last cull meant 'goodbye' to 86 employees. More will follow in their footsteps in the new savings plan
image: Rasmus Meisler

The Faculty of Humanities, University of Copenhagen, is to find a further DKK 60m in savings as a result of the government's 2015 requirement to cut budgets by two per cent every year over four years. It will have consequences for both employees and students

After a 9 September meeting between management at the Faculty of Humanities, University of Copenhagen (UCPH), and employees, it is now clear that there will be more layoffs among employees. Students will have to choose between fewer types of exams.

It is the management of the Faculty of the Humanities who on 15 September sent out a press release about the new savings plan.

The Humanities faculty is already hard hit by the government’s 2015 requirement that all universities cut an additional 2 per cent each year over four years from 2016 to 2019. The former Minister for Education Esben Lunde Larsen (V) at that time called upon the ‘obese’ universities to show community spirit.

Since then a so-called adjustment round has been carried out at UCPH – among the layoffs were 86 jobs at the Faculty of Humanities. Ten study programmes were also abolished and departments were merged. Now, as it turns out, this was not enough.

The Faculty is to save a total of DKK 150m and has already found DKK 90m. The meeting on 9 September was to find the remaining DKK 60m.

Ulf Hedetoft, Dean of the Faculty of Humanities, says explicitly in the press release that “redundancies cannot be avoided,” as most of the faculty’s expenditure is on wages, and two-thirds of the savings must be found on the salary budget.

Can avoid shutting down programmes

The Faculty of Humanities will not have to close down more study programmes.

Ulf Hedetoft also says that the faculty today uses one third of all its funds for education on examinations and expenses for examiners. In the new plan, the goal is to use a larger proportion of these funds in the classroom.

For the students, the good news is therefore, that they will continue to get 12 hours of weekly teaching at the bachelor’s level and 8 hours at the master’s level.

The bad news is that the savings will negatively affect their freedom of choice. It will hit the Faculty of Humanities’ range of nearly 200 electives which undergraduate students can choose from on their third year today. Master’s students may get fewer elective courses: They currently have up to 15 to choose from.

Up and beyond the two per cent a year savings requirement – the need for more cuts also comes from stricter admission requirements (students need from now on a minimum 6.0 grade point average to get in) as well as the new resizing of study programmes – the so-called dimensioning reforms. These mean fewer students and lower revenues for the Faculty of Humanities.