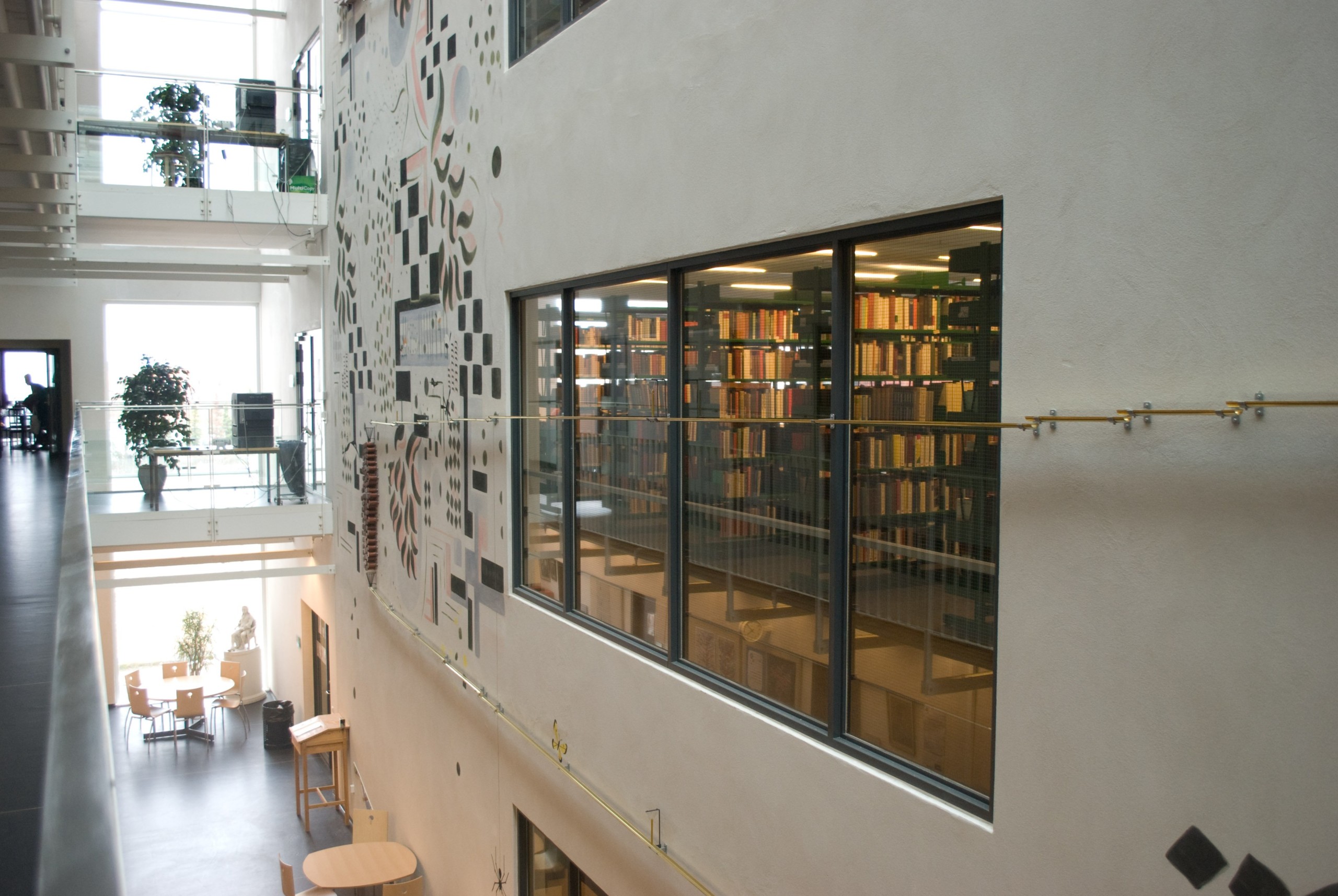 The new artwork at INSS has balls rolling down a slide
image: Anne Høj Nielsen

New interactive ball art at KUA is just too loud. Game over, it's no longer interactive

This interactive, sound-based mural on the four-floor tall wall of the Department of Scandinavian Studies and Linguistics’ (INSS) library at KUA is “quite a spectacle”, according to the agitated librarian interviewed by the Danish-language site Uniavisen.dk.

Like a giant gumball machine, the idea was that passers-by would be able to draw a ball from a vending machine for DKK 2 and let it roll down a slide. Although they were supposed to slide noiselessly, the balls proved to be too noisy and have been removed. They are now collecting dust in the Head of the Department’s office.

This spectacle is placed right up against the wall of a library, which is supposed to provide quiet study time for students, and is the workplace for several of INSS’ staff. Behind the noisy slide, prop painters from The Royal Danish Theatre have decorated the wall with animals and patterns.

The curse of the balls

The future of this fun but distracting piece of the artwork is still unclear, and a few ideas are bouncing around the department:

“We at the department are still trying to think of ways to use the art. Maybe it could run in the morning and evening, or on special occasions. Or we could have engraved, thesis-balls [a sentence this reporter never thought he would write] – that might be more fun than the current thesis-smurfs,” says department head John E. Andersen.

Despite these problems, the art is actually something the university wanted and asked for: “Now that we have KUA2, it’s important that we don’t forget what is now the old KUA,” says John E. Andersen. “It’s also important that the we have art of the highest quality, and this is just that. We are very happy that the New Carlsberg Foundation has helped us with it.”

The artwork is a commission piece by the internationally renowned Danish artist Kirstine Roepstorff, who among other things is represented in the Museum of Modern Art’s (MoMA) permanent exhibition in New York.

It is, in other words, a bit of a coup that INSS have had an entire wall done by her. But perhaps it wasn’t that well thought out.

Kirstine Roepstorff has been told that the slide is to be adjusted before it’s put into action, but apparently hasn’t been told about the different ideas for possible uses.

“My idea is that the slide is to be used by anyone, but I’m not exactly sure how the Department feels about it. I think there are opposing views at play,” Roepstorff writes in an email.

Department Head John E. Andersen explains that its a case of misunderstanding: “We were presented with the idea and thought that it sounded really exciting. But we were also promised that the sound level could be controlled. And one cannot sit undisturbed in the library as it stands.”