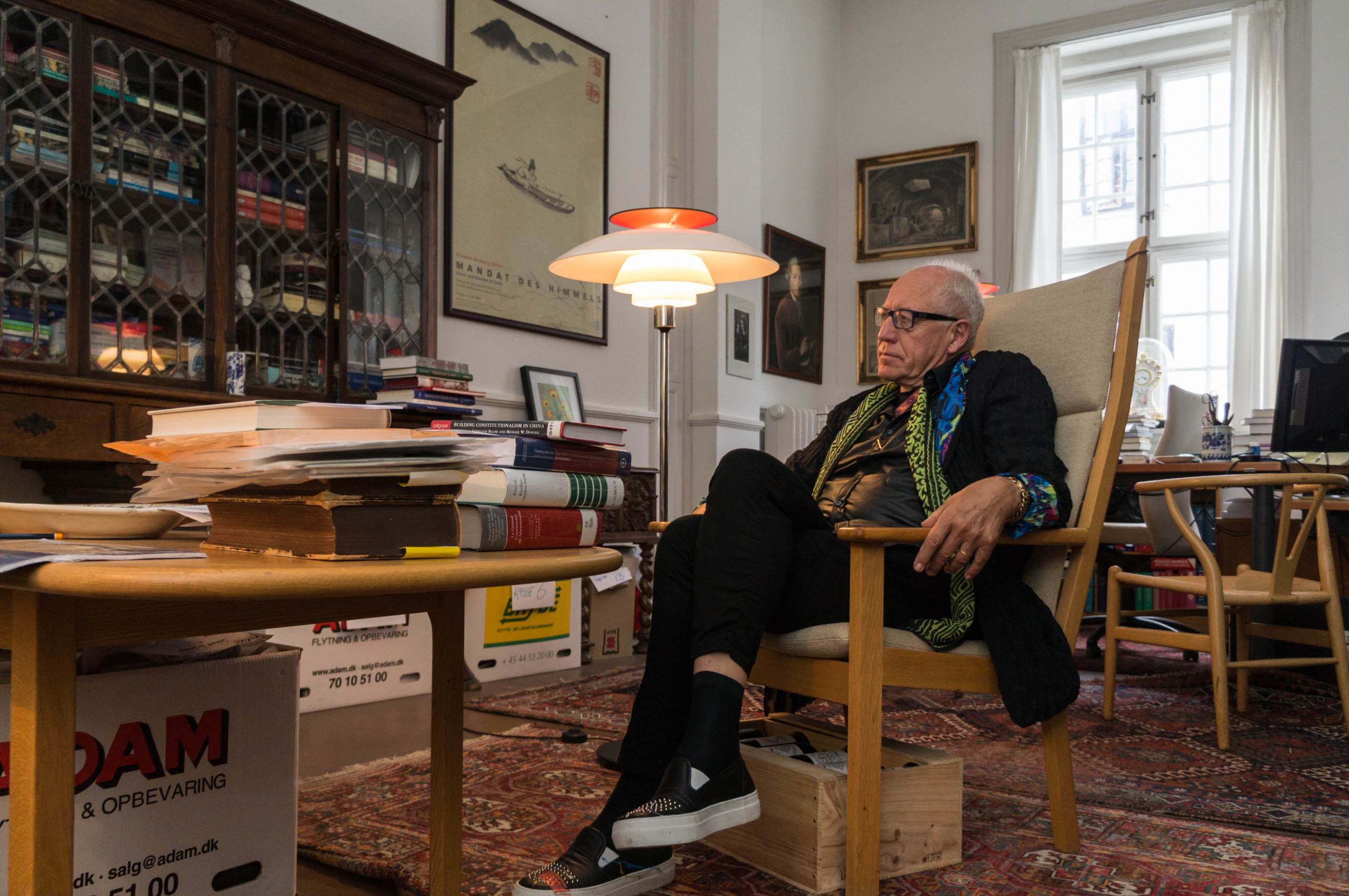 As a professor he is known for his challenging of beliefs, his integrity as an intellectual ... and for his fashion. We asked him about all of it

He is a respected professor of legal history at the Faculty of Law at the University of Copenhagen. But Ditlev Tamm is much more than that.

He is known for thinking outside the box, embracing adventure and living life to the fullest. The University Post asked him some serious and some silly questions. All of them tough questions.

You wrote a famous book about transitional justice after the Second World War. It deals with the legal proceedings that took place after the German occupation of Denmark. What lessons can we take away from what happened during that period?

”That book has played a very large part in my basic attitude towards law. I was born in 1946 and you might say I come from a time where people did not ask as many questions as we have done later. The book made me aware that you should not just trust authority or believe in the law as a force that can subsist and govern on its own. There are so many power relations behind the scenes. That was my basic lesson that I arrived at by reading cases and seeing how politics played an important role.”

“Something interesting that I have been thinking about lately. I was invited all over the country and abroad to give lectures about the book, but there was one place I was never invited to give a lecture and there was no discussion of the book. Can you imagine where it was?”

The Parliament?
”No. The Faculty of Law at the University of Copenhagen.”

Really? You never got a chance to…
”I have never been asked to give a lecture about this topic. They have never entered it into a discussion. The book was not discussed. I have given hundreds of lectures in other universities, but never at the Faculty of Law at the University of Copenhagen. I thought that it was a little curious.”

“Through the years I have grown to think that fashion is an art. In some ways at the same level as literature and music.”

Why do you think that is the case?
”I have been thinking why. Especially the lawyers at the faculty did not want to enter into this discussion, which is basically a discussion of the role of lawyers. You may say that the question of the role of lawyers and judges is ‘shall you just follow the official policy’?’ Basically you shall, because it is not the role of judges to have their own way of behaving outside of what is actually the democratic framework. But sometimes you have to have an opinion and sometimes you have to put something at stake for that opinion.”

Edward Snowden leaked information because he believed that average Americans were being spied on by the government and that this was against the constitution. Do you think his actions were justified?
”Immanuel Kant has this rule that when you act you should consider whether what you are doing could be made a general rule of behavior. Basically, I think it is difficult to imagine that the idea of you having promised to keep secrets and then revealing secrets is in line with what would be considered a general rule of behavior in society.”

Queen’s medal goes with the job

You are known for you unique sense of style. Many would even call it daring. If I may say so myself you can pull it off, but I do not think most could.
”I am much older than you are, so that allows me to be more daring. My career does not depend on me looking serious. That is why lawyers always wear black suits because it makes a person look more serious and trustworthy. You might say it is like a uniform that makes them look professional.”

“It is a privilege that in a place like the university you can wear what you want. It has taken me many years to develop my style. I used to wear suits. It is pleasure to wear clothes that are beautiful and communicate my personality. The jacket I am wearing right now is Japanese Miyake.”

“Through the years I have grown to think that fashion is an art. In some ways at the same level as literature and music. It fascinates me as a general part of culture. I like wearing beautiful clothes and making life more colourful. I feel we could all use a little more colour in our lives.”

Ditlev Tamm; “When I was a student, nobody pushed you to finish your degree quickly. It was common to immerse yourself in not only your own field, but also other areas of learning.”

In 2004 you were awarded a title by the Queen, a ‘Knight in the first degree of the order of the Dannebrog’ . I imagine that is a very prestigious title?
“It depends on who you are. If you are as old as I am and come from a family that belongs to an old hierarchy of civil servants like I do, it is a declaration that you expect to receive after many years of service. So for me it is just part of the job. To other people who have a different background and get the award on their own personal merit I think the feeling is quite different.”

Students should get chance to broaden their minds

Ditlev Tamm; “I think we should follow the example of other countries like the United States and some European countries, who only take on the number of students that they have the capacity to handle. I feel we are going beyond our current capacity.”

What’s your opinion on the Study Progress Reform ‘Fremdriftsreformen’ that aims to speed up students?
”It is something I have been very critical of and it is where I disagree with some of my colleagues. When I was a student, nobody pushed you to finish your degree quickly. It was common to immerse yourself in not only your own field, but also other areas of learning. This is something that I personally feel I profited quite a lot from. It gave me a chance to develop as an academic, but also as a person. It gave me a chance to broaden my mind.”

“Today we do have a problem, at least at the Faculty of Law. I believe we have too many law students, which in part leads to us pushing people to finish their degrees quickly and go to work. I think we should follow the example of other countries like the United States and some European countries, who only take on the number of students that they have the capacity to handle. I feel we are going beyond our current capacity.”

World of struggle, world of art

If an Alien from an advanced civilization arrived on Earth and you had the chance to ask it just one single question what would it be and why?
”What kind of culture do you have out there? Or perhaps ‘What does the word culture mean to you?’ I think it is interesting to know because, once a person or a society has met its basic needs, culture is what interests us. You might say that I live in two worlds. The world as it is that I struggle with and then an ideal world of literature and music that are not only beautiful, but are the essence of life and make life interesting.”