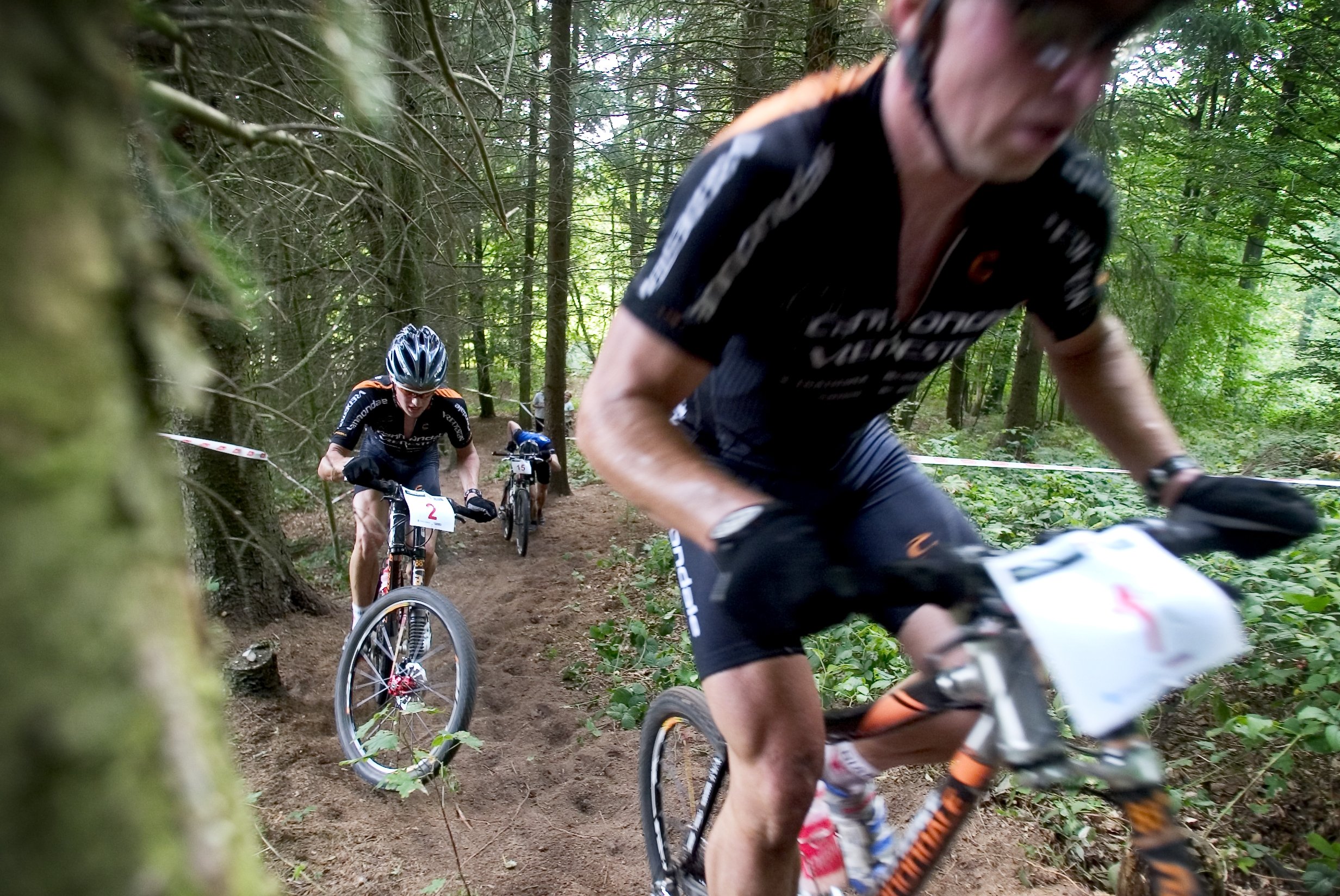 Peter Riis Andersen (in front) at the Danish mountain bike championships in 2006, two years before he failed a drug test. He studies medicine at the University of Copenhagen
image: Polfoto

Peter Riis Andersen cheated his competitors and took EPO to ride faster. Now, after a two year suspension, he just wants to be a doctor

When he propels his mountain bike over roots and through ditches in the forest, Peter Riis Andersen is no longer up at the front of the pack.

He no longer has a license to race the elite races, and only rides for fun.

Denmark has sported several icons of mountain bike racing, and Peter Riis used to be one of them. But back in 2008, for the second time on his way to the Olympic Games, a test revealed he had been using the performance-enhancing drug EPO.

He admitted, haltingly, at a press conference, that he had cheated, and that he did it in a short period because he had »delivered average results, that were under the level which I normally represent«.

Now, in the wake of a two year suspension from racing, sporting ambitions have been replaced by medical textbooks. And a new life, he tells the University Post.

»I have been through a personal transformation, and I am happy for it. So is adversity, it changes you. It is existential: My former identity was changed from one day to the next. And I had to find out who the hell I was«.

Can’t press the ’off’ button

The professional athlete, who intermittently followed his medical studies while upholding a gruelling 20 to 25 hour-a-week training and competition regimen, is now someone else.

He could, technically speaking, become the same fast Peter Riis as he was before, he reckons. Indeed, right after his two-year ban, he got back his license to race. As he puts it: »In the course of two years you can get very hungry«.

But the hunger for bike racing was never quite enough to get Peter Riis seriously back in the saddle.

»I have enough on my hands just becoming a doctor now. One thing is the training. This you can just about handle, so long as you don’t have children. But the travelling: Being away from lectures, waking up in an airport hotel in Zürich, flying home to Copenhagen and going directly on to campus. It is tough with these switches in focus. Bike racing is intense, and you can’t just press the ’off’ button.«

New doping controls, always keeping track of riders’ whereabouts, don’t fit the lifestyle of someone who no longer lives and breathes for the sport.

»Last year, with a license, I had to constantly think about where I was. All the time! So when I have been having some drinks down at the student bar Friday night, should I then have to think about where I am going to be the next morning, because they might turn up? A license to race? No, I couldn’t be bothered!«

Think they know everything

Back in 2008, which according to Peter Riis was the only year in which he doped, he got the EPO by way of the criminal underground, never through his contacts at university.

Neither was it his study of medicine that pushed him across the threshold of doping sin, he argues.

Of course he had his medical knowledge of the drugs, and the fact that as a medical student he was acquainted with the needles. »But I would have been, if I was a laboratory assistant too,« he says.

In the meantime, relief from the moral hangover has been forthcoming.

But they are about the only negative comments he has faced since the doping-revelation of 2008. Former colleagues from ALB Gold have since got new contracts, and none of them were put under suspicion as a result of what Peter Riis did, he says.

In the Danish sports world, paradoxically, Peter Riis is almost seen as the victim, not the criminal. He points to the fact that he enjoys widespread sympathy, and that he admitted the doping credibly, and quickly.

»Most people actually felt sorry for me. There are a lot of people who realise that they will never understand the cycling world. They don’t know why I would bike 200 kilometres on a cold and wet February day, and they don’t understand why I injected myself with needles and broke the rules. But nevertheless they have said: ‘OK, this is not our world, but I like the person.’ This, I have experienced a surprising number of times.«

»Those that have reacted the harshest, have been those that I would call the ‘amateur’ riders. They think they know everything about bike racing, and they think that the only reason I could ride away from them, is because I took the drugs,« he says.

Peter Riis strives to be in medical practice rather than research, maybe as an ear, nose and throat doctor.

»I want to be in contact with patients, basically because it gives satisfaction doing things for other people, and curing the sick,« he says.

Peter Riis still has his indoor bike in the office which he shares with two other medical students at the Faculty of Health’s Panum Institute.

He trains on it every now and again. But the little red gadget on the handlebars will typically show about 15 per cent less power going through the pedals than three years ago.

Recently, at the Dust Cup, an amateur mountain bike race series in the forests north of Copenhagen, 28 other riders came over the finish line before Peter Riis.

It is hard to put into words what makes the sport so intense and so compelling.

»There are some sports where you can take a three-month break and come back again without too many problems. Maybe there is a strong technical element in it, or a strong element of experience. But in this sport, you have to train every day, all days of the year. This is the most basic demand. And every day you are confronted with a basic question. Is it worth it?«

»Then, when you suddenly start producing worse results, then it is no longer worth it. As simple as that. You need the carrot ahead of you, the good results, to make it worth it.«

One thing that was not Peter Riis’ motivation – either to get to the top of his sport or to dope – was the money, he explains.

»If my life was about making money I would have finished my medical studies, and start working up some overtime hours!« he says.

But that said, »it was a good life, making a living off riding your mountain bike.«

He pauses, then by way of explanation.

»And if you just need to take a short cut, and it works, otherwise doing what you normally do – and this is not to sound like me excusing myself – then it is so damned easy to go like this,« he snaps his fingers, »and the rest of the time you don’t have to think about it.«

Now Peter Riis runs, lifts weights and trains an average of ‘only’ five hours a week on his bike.

»But some times zero hours a week,« he laughs.

»I miss being in really good shape, but I just can’t be bothered to live that lifestyle anymore. «