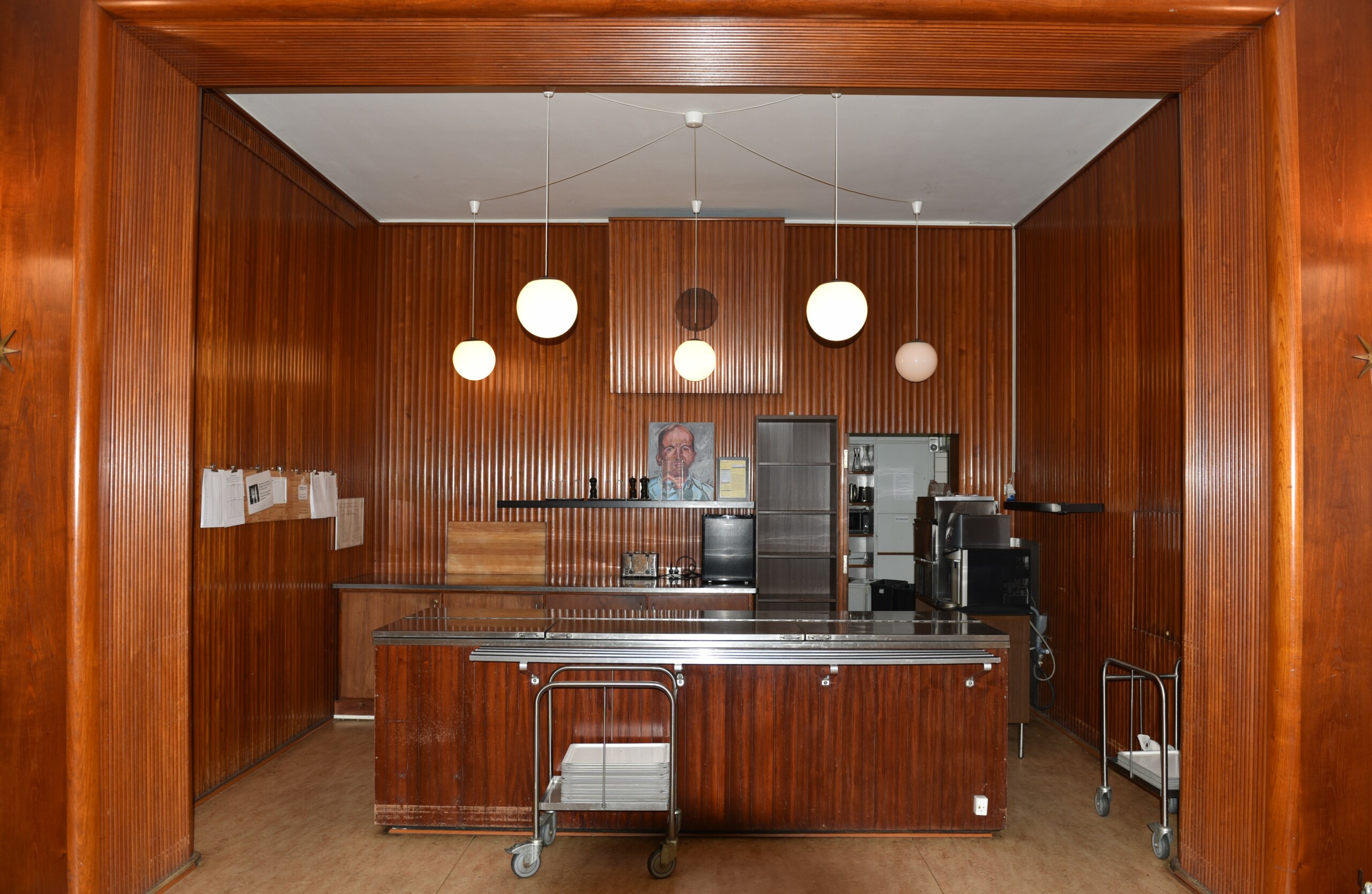 At Nordisk Kollegium, students are served three meals a day, and although they do a lot of things for themselves, their food is prepared for them.
image: Rasmus Buhl Kristensen / Uniavisen

Dorms Disclosed — Time-honoured traditions, a rich history, and a dining room with marble columns meet pasta salad, pop music, and an apple throwing contest. At Nordisk Kollegium, the old and the new intertwine. And the residents don’t even have to cook their own meals.

The architectural style of Nordisk Kollegium is known as functionalism, a somewhat austere aesthetic that was popular in the 1940s. Its open courtyard is surrounded by three red-brick wings with rounded corners on the outer walls.

Despite the building’s age, its style fits seamlessly into its location on Strandboulevarden in Østerbro, »and even though there are 130 of us, we all know each other,« says Daniel Hjorth Lund, who has lived in the dorm for four years and seems at home in the role of tour guide.

No need to cook

All of the rooms have herringbone floors, and the common areas are decorated with solid furniture and beautiful wooden panels. It looks timeless, and the old intercom system at the front door has been preserved, even though it is no longer in use. This relic is a testament to the history of the place, as are the dorm’s numerous traditions.

One of these traditions is the way the residents eat together. It is built into the architecture, in the form of a professional kitchen and a dining hall in the middle of the dorm. Every day of the week, breakfast, lunch, and dinner are served here – all prepared by the dorm’s two chefs and kitchen assistant.

Daniel Hjorth Lund says, with a twinkle in his eye, that the students of the Nordisk Kollegium may be the worst cooks in Copenhagen, because they never have any reason to prepare food for themselves. 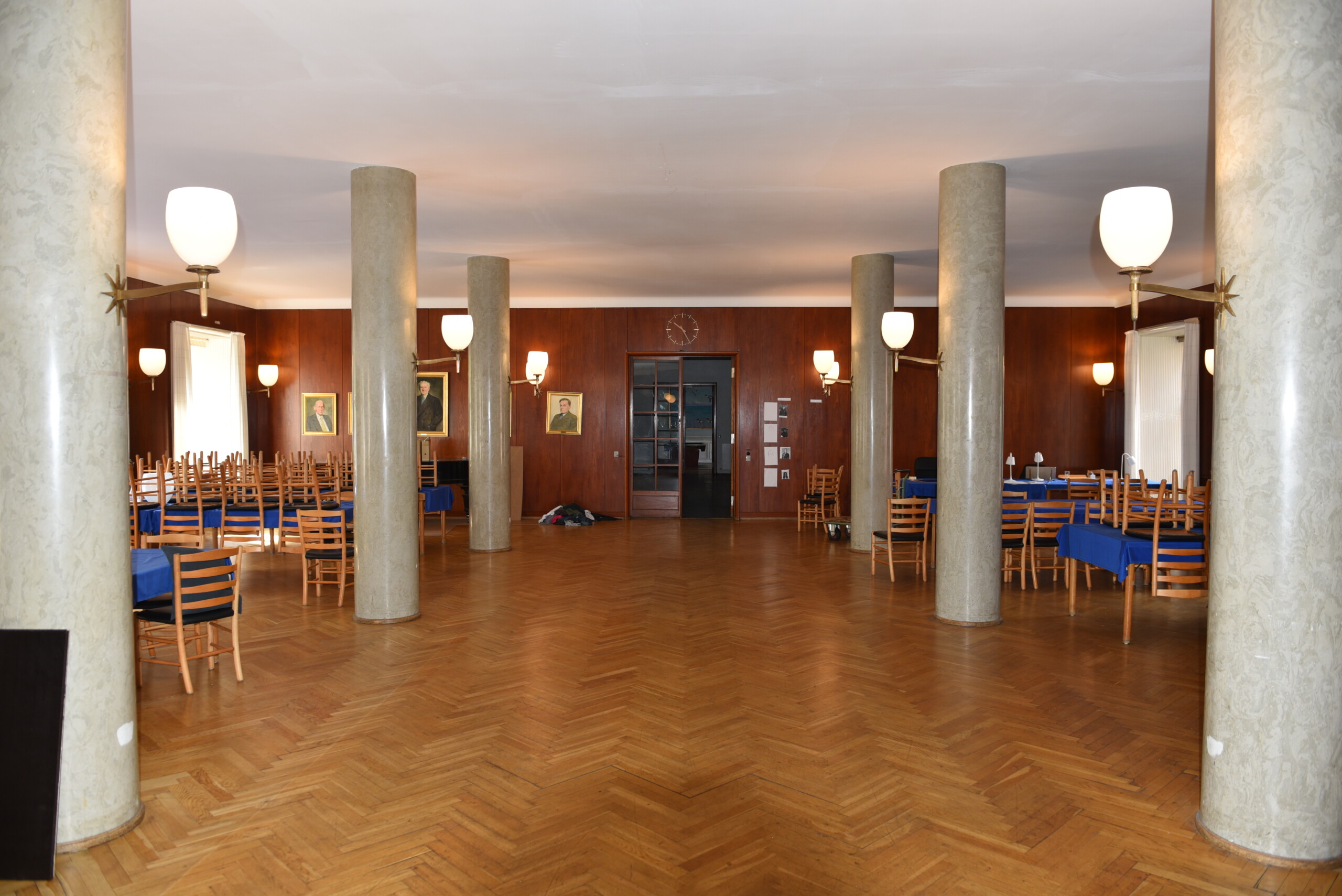 This dining arrangement means that the large dining hall is a place where all the dorm residents meet up on a daily basis. Between the pillars, they sit at long tables and eat with the others who live on the same corridor. Dinner is served at six in the evening every day. In the morning, it is traditional to sit with people from other corridors.

And then there is the cunning rule that prohibits mobile phone use in the dining hall; this means the residents are forced to get to know each other, says Daniel Hjorth Lund.

He likes to sit at the breakfast table from six to nine in the morning to read (the printed) newspaper and chat with his fellow residents, if he has nothing else scheduled. The college receives two national newspapers – Politiken and Information – and some residents prefer to eat breakfast alone, with the newspaper for company.

After breakfast you can make your own packed lunch, and there are always leftovers from dinner or a pasta salad to supplement your  sandwich.

When the dining room is not being used for breakfast and dinner, it is a reading room for residents who prefer to consume their texts and packed lunch at home than elsewhere. It is frequently used, not least because there is always a pot of hot coffee available, says Daniel Hjorth Lund. 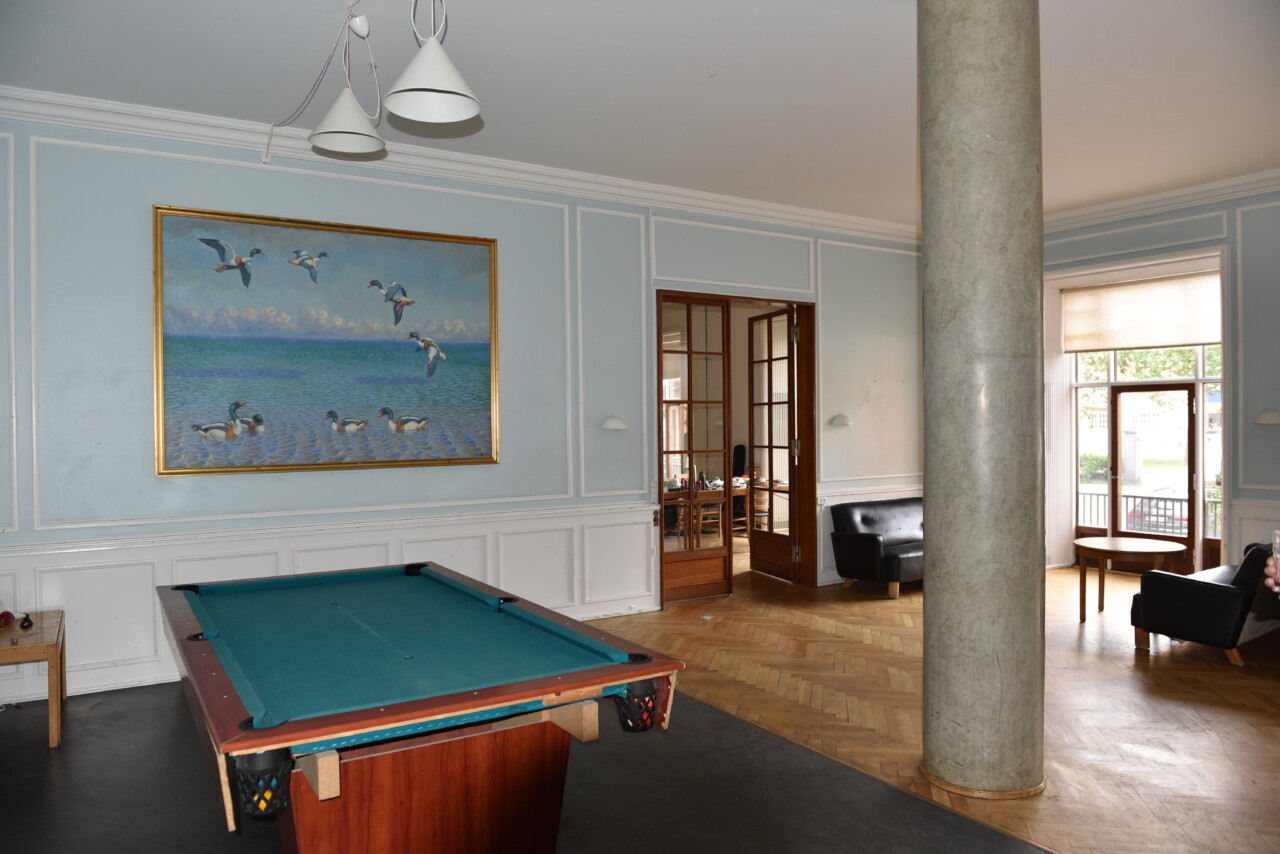 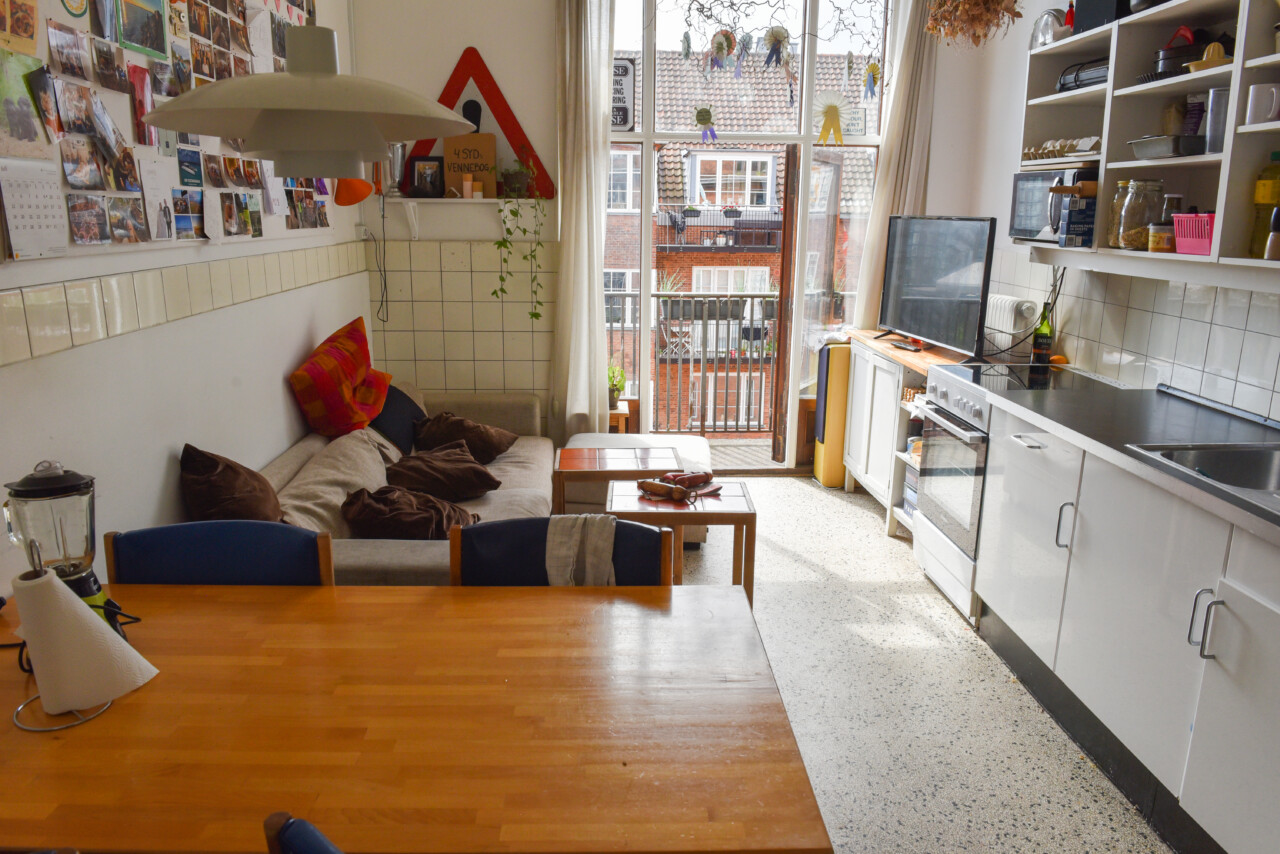 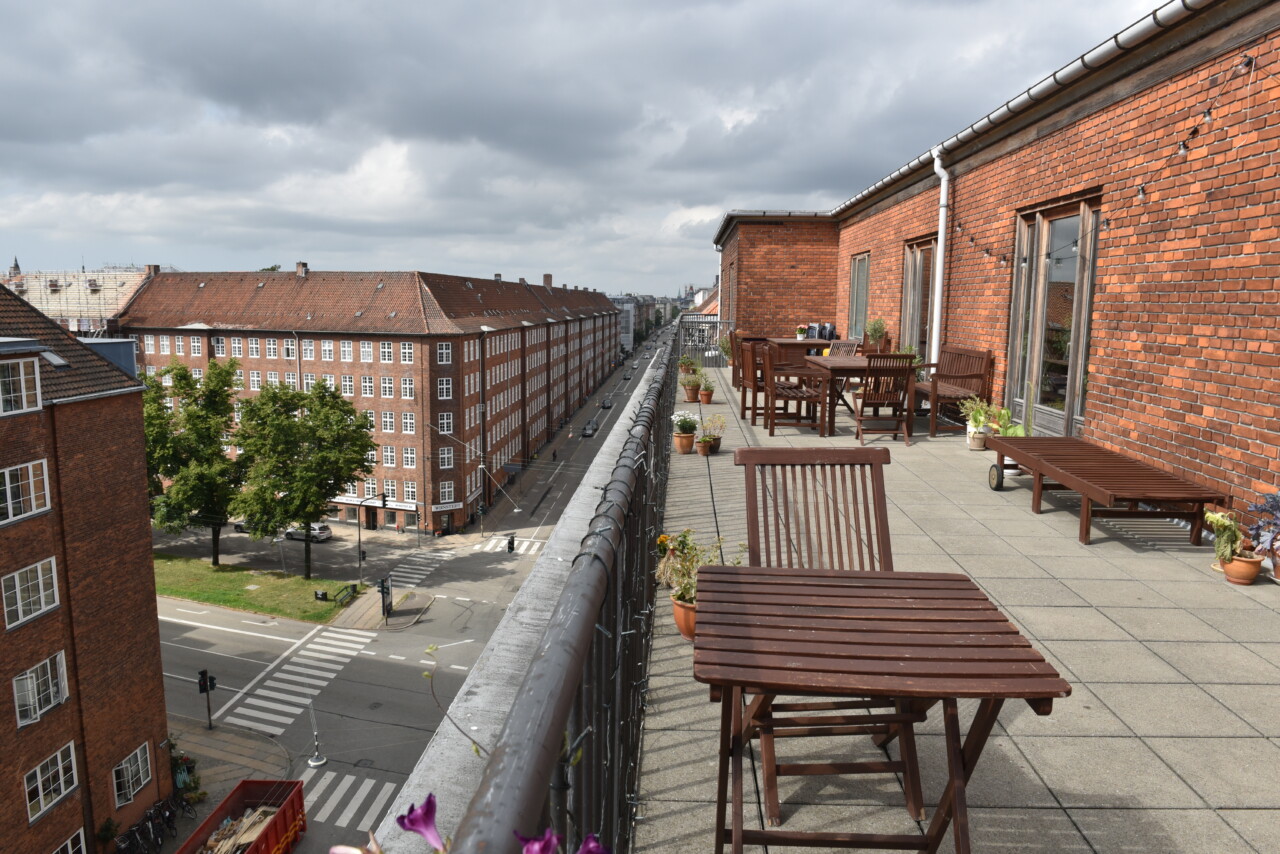 Your imagination sets the limits

In addition to the meals, parties and annual traditions are what bind the dorm together, says Daniel Hjorth Lund.

The entire month of October is set aside for a number of competitions at the legendary NOKO open, which is the Nordisk Kollegium’s open tournament. »It is only your imagination that sets the limits for what you can compete in here,« says Daniel Hjorth Lund, and proceeds to list disciplines that are guaranteed never to make the Olympic Games: Rum Truffle Eating, Apple Throwing, Listening to Medina (a Danish pop singer, ed.), and the Great Heads or Tails Tournament. And there are many more, he explains.

At Christmas time, a huge Christmas tree adorns the dining room, and it is decorated on the annual Christmas crafts day, as residents drink mulled wine and eat the traditional Danish Christmas treat .

On the Danish national holiday Store Bededag, the dorm residents wear their student caps for a tug-of-war with G.A. Hagemanns Kollegium at the Kastellet Citadel Church. The competition ends cordially, with the two dorms eating together and then having a party.

Twice a year, there is a big meeting for the entire dorm known as Plenum. Here, all the residents are invited to review the agenda and vote in elections for the 30-50 committees and posts in the dorm. »We have so many committees that I can’t remember them all,« says Daniel Hjorth Lund. Those he can remember are the Cheese Committee, the Farm Committee and the cultural committee Faust, which invites residents to cultural events such as the theatre or opera. 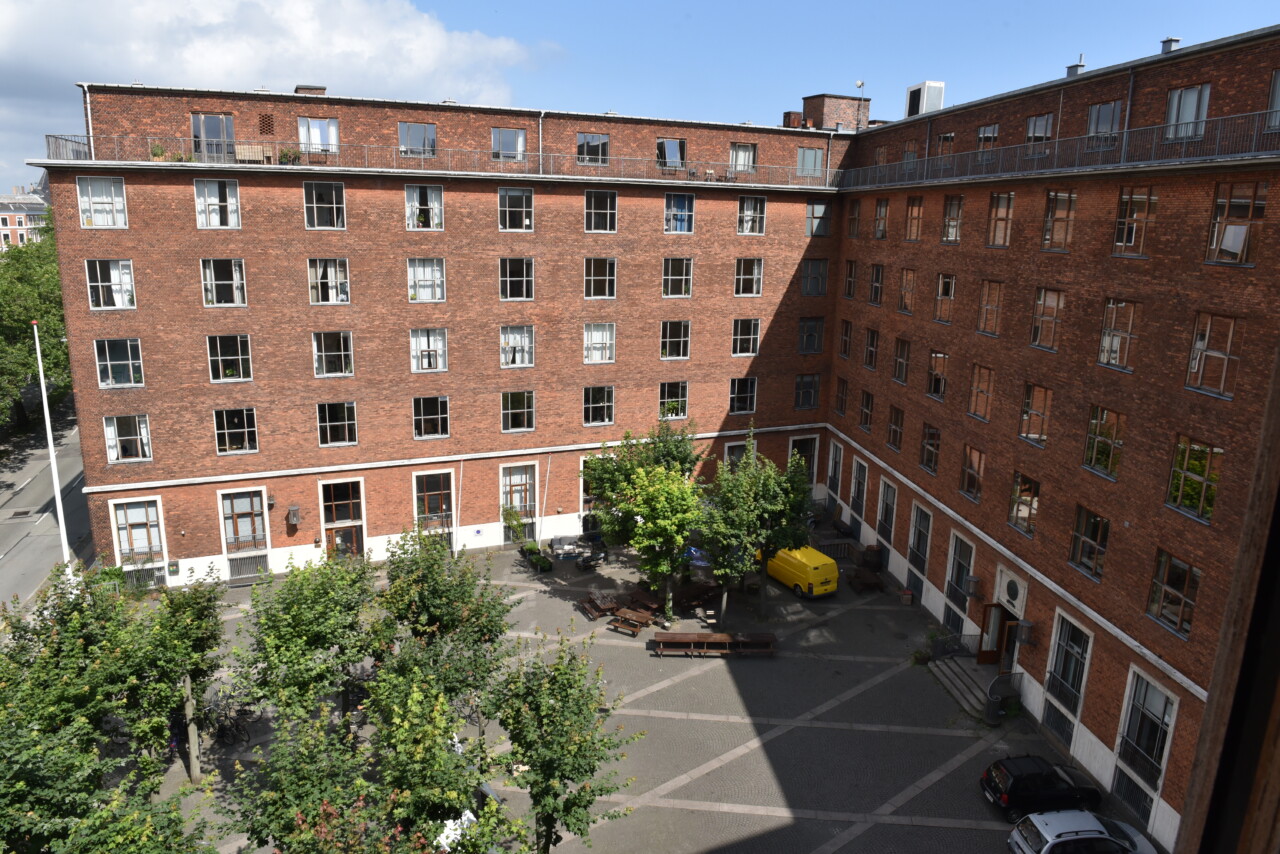 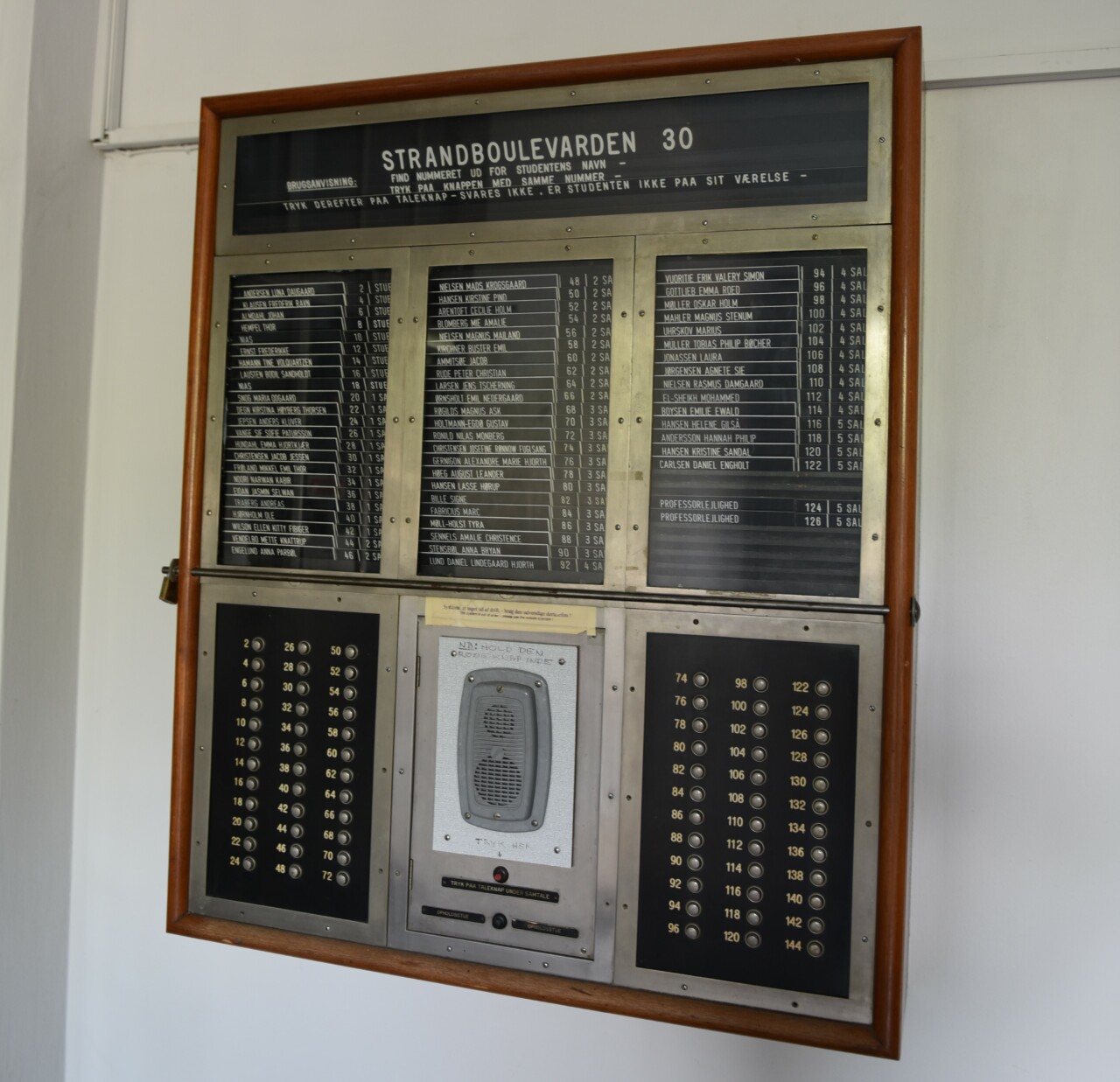 Even though you can no longer use the old door intercom to call the residents' rooms, you can still see who lives where. When you move out of the dormitory, your name tag gets glued to the inside of your old door. 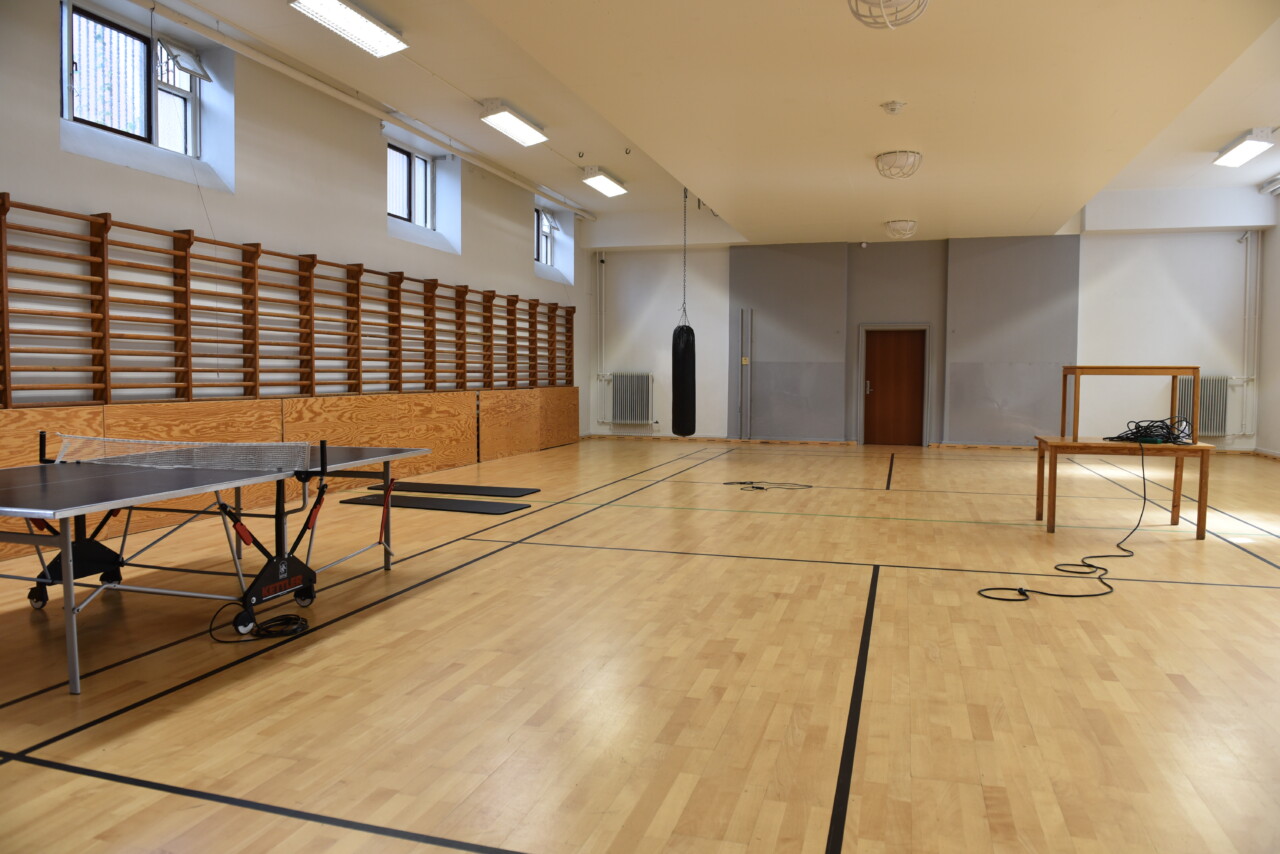 If you are into floorball, old school wooden wall bars, table tennis or the like, the old gym still works well.
image: Rasmus Buhl Kristensen / Uniavisen

»We also have a Dog and Horse Racing Committee. The Plenum meeting is a long-winded affair! It usually lasts from 19:30 to the early hours of the morning. Participants usually consume a few beers during the course of the evening… and the ideas that we dream up late at night may not be our best ones. But we did end up going to see some horse racing in Charlottenlund.«

All the residents have one of the many positions of responsibility. If you are responsible for a specific area, you will be called a ‘master’ and among these titles you will find a Bicycle Master, Sewing Machine Master, Fireplace Emperor, King Frost, Squeegee Master, Flag Master, and so on.

Treasures in the hallways and memorials on the doors

In most of the corridors, there are 12 residents who all share a kitchen. Although food clubs are rare, due to the advantageous common dining arrangements, residents of the same corridor tend to form close-knit groups. They knock on each other’s doors when they go down to dinner, and hold a monthly meeting to discuss good ideas and deal with everyday frictions. They also discus what the corridor tax should be spent on. All residents pay between DKK 10 and 30 a month for joint purchases if the hallway is missing something – this could, for example, be a new frying pan for the eggs that they do actually fry once in a while.

Up on the fifth floor, the average seniority is a little higher than in the rest of the dormitory, as the residents who have lived in the dorm the longest are at the front of the queue to pick which room they want. Here, there are fewer residents on each corridor, they have a larger kitchen, and even a roof terrace to frolic on. The two roof terraces are open to everyone, but it is mostly the fourth and fifth floor residents who use them. This is where Daniel Hjorth Lund lives.

All rooms have their own toilet and shower. The outside of the doors are adorned with newspaper clippings chosen by fellow corridor resident to reflect the personality of the room’s inhabitant. On the inside of the doors are the nameplates of all previous residents, from the dorm’s defunct door intercom. Thus, the doors also serve as memorial plaques for all the earlier inhabitants of a dorm room.

If you have been tempted by the functionalist architecture, the potential to become a master of something obscure, and if you don’t care about the deterioration of your cooking skills, then keep your eyes peeled for the next time the college opens for applications. This happens four times a year, »and the vast majority have applied more than once. And we prefer that you have taken part in a tour first, so you are familiar with what we prioritise as a dorm,« says Daniel Hjorth Lund. 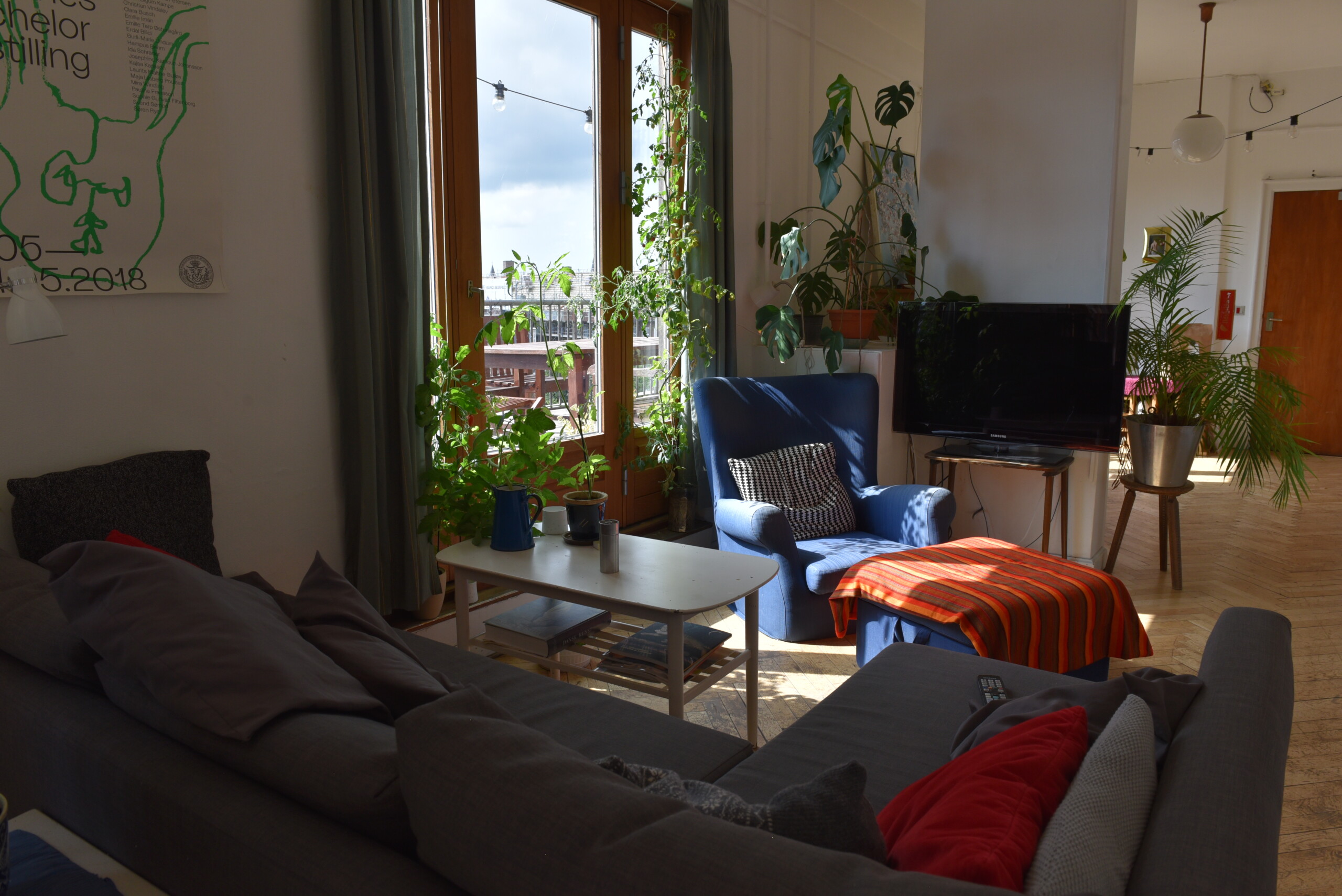 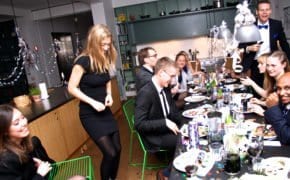 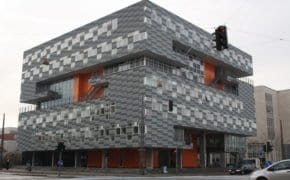