Down on the (cricket) farm 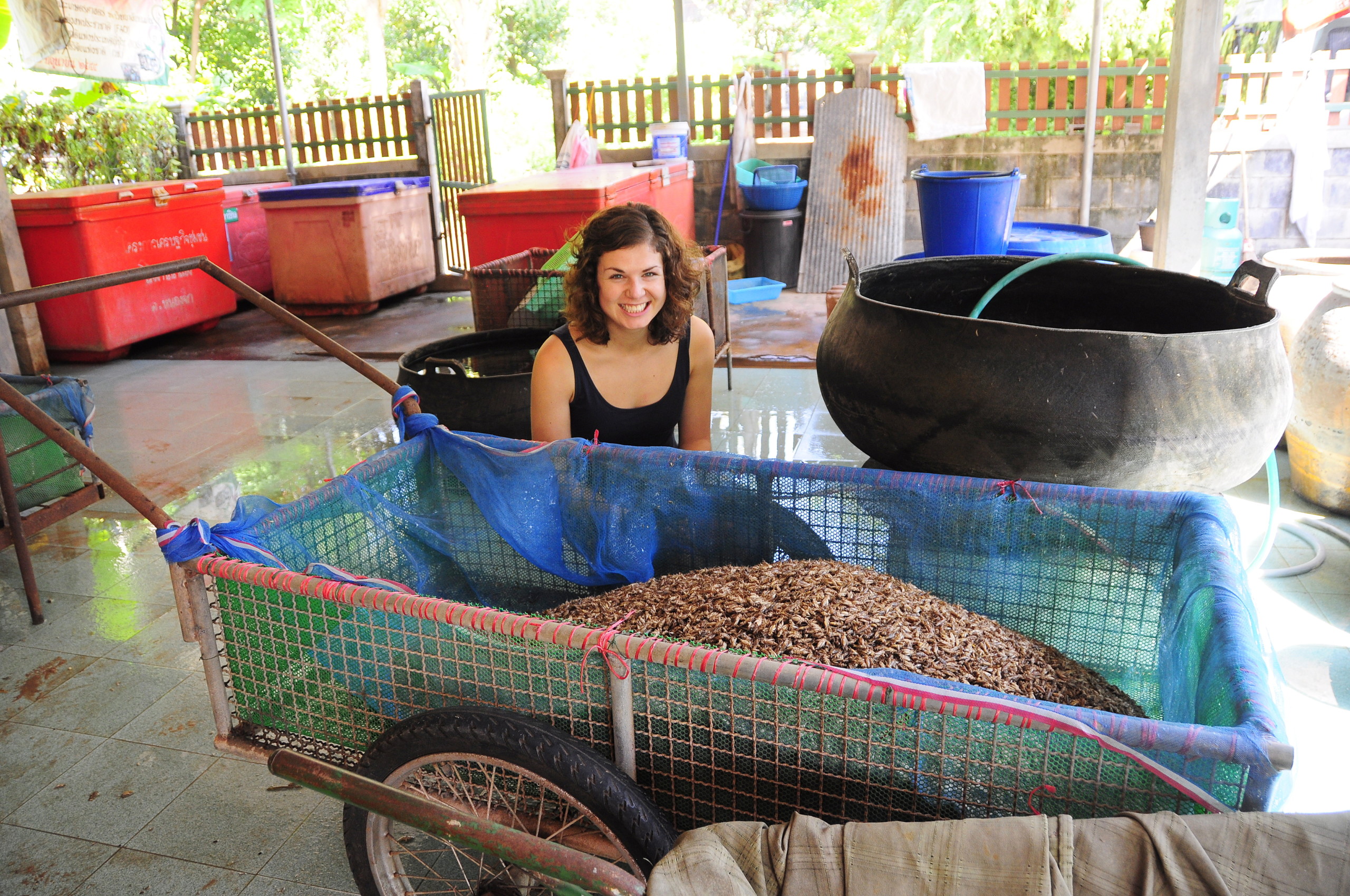 PhD student, Afton Halloran, and a mound of crickets, ready for packaging

Approaching the house, I could hear them before they came into sight. At first, a low hum, but gradually, with every footstep, the sound grew into a rhythmic, high-pitched chirp.

Placing my hands together in a wai, I greeted the farmer. He turned and made his way to the back of the house. A series of low, concrete pens sat under a tin roof. I peered over the edge and greeted my million research subjects: an orchestra of crickets.

I stumbled upon their show somewhere towards the finale; in fact, it was clear their performance would not last much longer. The farmer and his wife got down to work and began scooping them into a bucket with nothing more than a plastic bag attached to a coat hanger.

Anyone who has travelled in Thailand has probably seen the overflowing piles of edible insects hawked from tiny street carts – and maybe you have even tried some of them yourself? However, few know the backstory of how insect species, like crickets, have arrived on our plates.

Eating insects, or entomophagy, is nothing new in the northeast of Thailand. It has been commonplace within the Isan diet, but has recently gained popularity in our corner of the world. With over 2000 edible species in Thailand alone, this diversity has played a part of the development of local food culture over time. While most insect species are harvested from the wild, some insect species have been found suitable for domesticated conditions. Two of these species are the house cricket (Acheta domesticus) and the field cricket (Gryllus bimaculatus De Geer).

At this time, Thailand offers the best example of cricket-farming. Some of these farms have been around for 16 years when the technology was first introduced. Now, there are over 20,000 registered cricket farms in the whole country. It is estimated that over 7500 tonnes of crickets are produced per year. (That’s a lot of crickets!)

I often joke with colleagues in the field that 2014 was the unofficial “Year of the Edible Insect,” or at least it seemed. An immense amount of attention has been placed on how and if edible insects can help to solve some of the major crises that our global food system is currently facing – one of such issues being the goliath environmental footprint that the act of eating has on the planet. Thus, finding more environmentally sustainable animal-source foods has been placed high on the international agenda.

While crickets alone will never be our saviour when it comes to the irreversible damage that we have already inflicted on this planet, they do have some unique features that make them a good climate-friendly food. Firstly, they are extremely efficient in converting food into edible body parts (you can eat about 92% of a cricket). This owed to the fact that crickets have a low daily energy bill; being cold-blooded they spend relatively little energy heating on themselves up. Secondly, they are not heavy drinkers; crickets do not require significant amounts of water when compared to livestock like cattle, for example. Lastly, crickets, like Acheta domesticus, are quite social and don’t mind living side-to-side with their neighbours. Plus, they can be farmed in relatively small spaces.

While these mini-livestock a lot going for them, one thing that sets them apart from other livestock is the fact that they are often not consumed in the same amounts. In other words, crickets do not currently contribute as significantly to the Thai food system as production animals such as beef, pork and chicken.

Nonetheless, in a world with an ever-growing appetite highlighting the greenhouse gas emissions, land occupation, water consumption associated with what’s on our plates is extremely useful in addressing global impacts such as climate change and natural resource depletion, and local impacts such as water and land shortages . While we do know that insects, like crickets, are extremely efficient in converting food into edible body parts, little is known about exactly how specific insects measure up to their two- and four-legged counterparts.

In order to do this, I use a methodology called Life Cycle Assessment (LCA). In short, LCA is a method which allows us to understand the environmental impacts associated with a product or process. In the case of my research, I am interested in understanding the impacts associated with cricket farming when compared to other conventional livestock. This involves measuring what comes in and out of the system, and tracing back the origins of these products.

I am still in the midst of analyzing my current data. However, in the only study of its nature, Oonincx et al (2010) concluded that Acheta domesticus have relatively lower greenhouse gas and ammonia emissions. For example, no methane emissions were recorded.

See the University Post’s Insects: The food of the future. This covers a recent UN report on the need for more insect farming.

Cricket farms are now growing in popularity, and I have seen both small and large enterprises popping up around the world over the past few years.

However, like any delicacy, crickets are not cheap. In fact, in Thailand, where they are produced in large numbers, 1 kg of crickets can often cost a little more than a kilo of chicken. For now, they will remain a snack rather and a dietary staple. Go online and 1 kg of imported cricket meal (ground crickets that can be used as flour) will set you back over 500 Kr.

However, the environmental sustainability of crickets, as well as the current value of the product does not tell the whole story. I am also exploring the just how cricket farming contributes to rural economy and development. This goes beyond just cricket farming itself, including the other actors in the value chain who have profited from the expansion of this relatively new sector.

My research is a part of a much larger research group called GREEiNSECT/ @GREEiNSECT, which has been supported by the Danish International Development Agency. While the main country of focus is Kenya, Thailand offers one of the best places understand what a fully functioning edible insect economy looks like. Therefore, Thailand serves as a source of inspiration for my both my specific PhD project, as well as our research group as a whole. Later this year I will head to Western Kenya in order to carry out some of the same research which I carried out in Thailand.