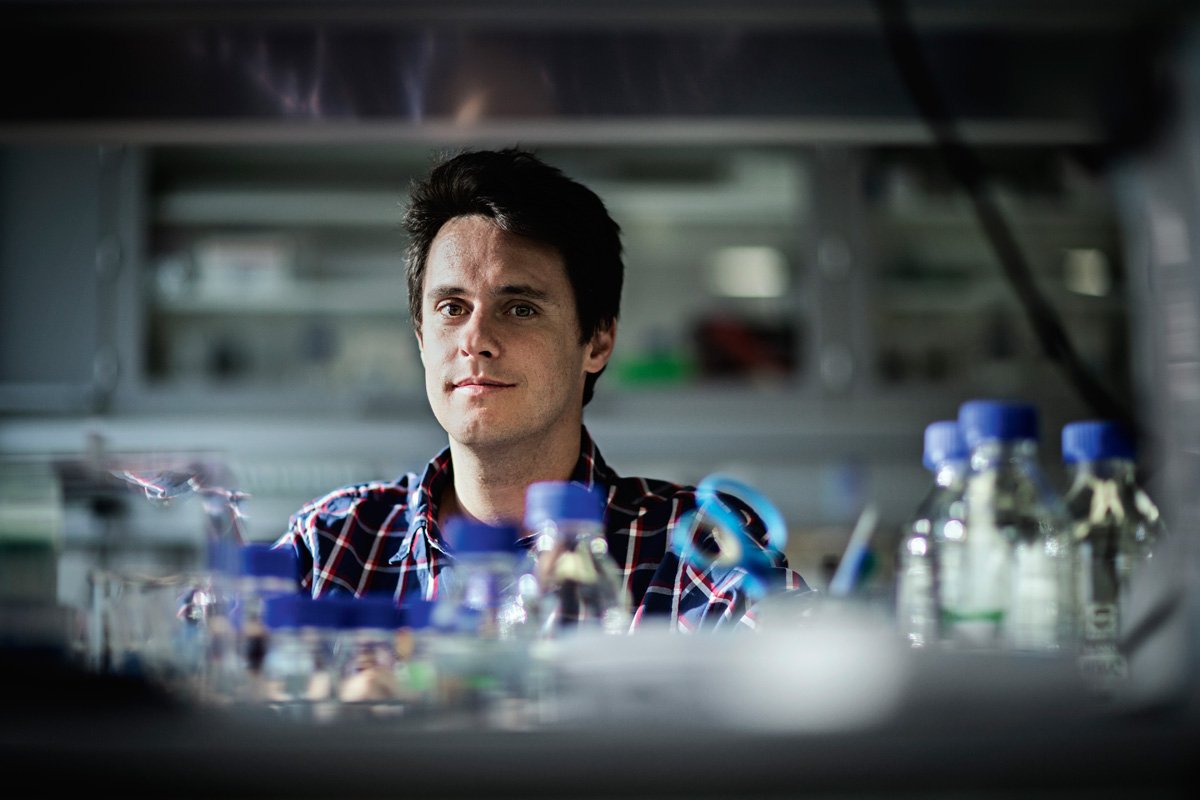 DNA researcher Julien Duxin has just arrived in Copenhagen to be in charge of his own laboratory for the first time. And with a DKK 10 million grant, he's off to a good start.

Julien Duxin spent much of this summer biting his nails. He had already passed the first test, the interview, which secured him the position as head of the laboratory at the Novo Nordisk Foundation Center for Protein Research. But in June, a month before he was to cross the Atlantic, he had been called to an interview in Brussels. A meeting that was just as important for his future. At stake was DKK 10 million he could get from the European Research Council (ERC) for his future research in Copenhagen, DPC-REPAIR.

The project will investigate the molecular mechanisms behind the repair of DNA lesions known as DNA-protein crosslink. These lesions are suspected of causing premature aging and cancer. The ERC Starting Grant would provide Julien the funds to hire the PhDs and postdocs that would help start his laboratory in Copenhagen.

“Whether I was nervous? Yes!” says Julien Duxin, secure as he is now with 10 safe ERC millions on his research account at his new office in the Center for Protein Research at the Panum Institute.

“But I had a good feeling in my stomach when I left the interview in Brussels. I had prepared thoroughly and I had done what I could.”
As every university graduate Julien Duxin has a certain routine in handling high-pressure exam situations. And he has something else on top of this – a past as an elite athlete.

“The nerves you have before a big presentation or a defense – it’s the same feeling I had before a big tournament. So holding up under the pressure, this is almost the same. And just like in sport, there is talent involved in research, but 99 percent of it is hard work. Knowing that you have prepare well helps you keep the stress under control.”

Julien Duxin was, by his own admission, “born with a tennis racquet in his hand.” His father was a coach in the French tennis federation. His mother, Fiorella Bonicelli, was a two-time winner of the French Open doubles in the mid 70s. The parents agreed that their kid should not be paced into a tennis career and they did not protest when he – at the age of 10 and with a clear sense that the tennis talent had not been passed down – switched his racket with a golf club.

He performed well in the mathematical subjects – less well in the language subjects, which he partly ascribes to the language confusion arising from growing up in the South of France with a Spanish-speaking mother from Uruguay. But Julien Duxin’s life circled around one main thing: Golf. He played golf when he was 14, and the whole family moved to Montevideo in the mother’s country of birth. And golf was the direct cause of him five years later getting the chance to go to the US and go to college.

“I went to the United States because it is the only place you can get a college education by doing sports. In France, they look down on athletes. In the US, I could get my education paid funded by Missouri State University with a golf scholarship.”

The man who made the difference

For the second time in his life Julien Duxin moved to a new life on a new continent. He flew to Chicago and about to board a local airline when he realised his mother had booked a ticket to Springfield, Illinois – and not Springfield, Missouri, where his dorm room was waiting for him.

In the real Springfield, he met the man who tipped the scales from sports and towards academia.

“It was my lecturer in organic chemistry that got everything started. He was a genius. He always went into the auditorium without PowerPoints, just with a piece of chalk. One hour later he had filled the blackboard after a brilliant, stimulating lecture.”

Julien Duxin had gradually come to the realization that his – significant – golf talent was not at a level where he could count on living off it. And with his newfound academic interest, he threw himself into chemical experiments and internships.
Not everything was fantastic.

“I worked at the time in an organic chemistry laboratory, and I hated it. I was uncertain of what it was I was mixing together, and whether it would explode in my face. I liked the theory, but not the practical aspect of it.”

Julien turned his attention instead to molecular biochemistry, where he liked the laboratory work better. And it was here that he got his breakthrough.

“But after three years of research, I had absolutely nothing. So I had to make a decision. I convinced my research leader that we should follow the protein and find out what its function was.”

“It was my lecturer in organic chemistry that got everything started. He was a genius”

And then Julien Duxin began to get results:

“DNA2 was mostly known for its role during replication inside the nucleus. But we showed that it also plays a role in the maintenance of mitochondrial DNA.”

Mitochondria are known as the ‘power plants of cells’. According to Julien Duxin, the discovery was not sensational in his research area. But it was a personal success. It paved the way for a position as a postdoc at Harvard University.

“DNA2 was mostly known for its role during replication inside the nucleus. But we showed that it also plays a role in the maintenance of mitochondrial DNA”

Here Julien Duxin studied DNA protein crosslinks – that is, damaged DNA structures that arise from environmental influence or chemotherapy, and which are suspected of causing premature aging and cancer in humans. If – and this is a very big if – we manage to identify the proteins that repair these lesions, the pharmaceutical industry will be able to start producing ‘inhibitors’ that could be used in the clinic to treat diseases such as cancer.

It is this work that Julien Duxin now continues in Copenhagen.

The decision to go to Denmark

“Harvard was never going to be the place I ended up,” Julien says when asked why he left the prestigious American university.

“From the moment I started my postdoc, I had in my continued academic career in mind.”

The question was where. Julien Duxin has a wife (Maria) and a two year old son (Felix).

“We never thought about Denmark before, but I was looking at labs AND a good place to raise a family. In my field, Copenhagen is a huge hub for genomic instability. There are many labs here that are well known worldwide. When I saw that there was this opportunity to open a lab, I jumped at it, because this was a unique opportunity.”

And now he’s here. He has got DKK 10 million to ensure his employment – and he can start recruiting. He does not know what he will discover. Or how long he will stay.

“In my field, Copenhagen is a huge hub for genomic instability. There are many labs here that are well known worldwide”

“I have moved every five years since I was 15. A part of me wishes that I could settle down here, but …we will see. I don’t like making long-term plans. What’s important is that I know what I want to work with for now.”

The next five years Julien Duxin can work with exactly what he wants – and he can do it with a freedom he has not had before.
“It is a great opportunity. To be allowed to start a lab and hire people. But it also feels a bit weird at this point in my career: I used to be the one on the bench. Now it is me that has to manage the lab. I do not know if I will be good at it. It’s a test: Can I lead people? ”