Eating in Copenhagen on a student budget 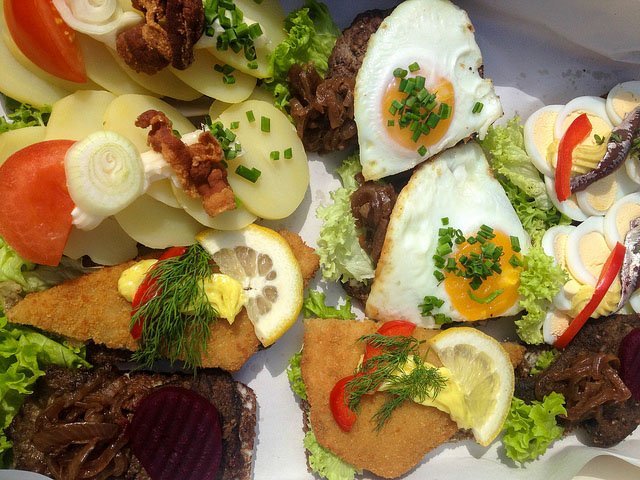 An example of Copenhagen's smørrebrød food culture. One of several cheap eating options if you one to eat for under DKK 100
image: Alex Berger

100 kroner, or about 18 dollars or 13 euros. This was the limit for Alex Berger, an American graduate, when he tried to eat on the cheap in expensive Copenhagen

There’s one essential rule for enjoying a city: it always looks better on a full stomach.

In Copenhagen, that can be surprisingly difficult to accomplish for students. With a minimum wage that floats around USD 21 [= DKK 113, EUR 15, ed.], cheap food for the Danes is still quite often expensive food for the rest of us. There are a few guides to eating on the cheap in Copenhagen floating around, but most are absolute hogwash and seem to fail to understand the concept of “cheap”.

This guide isn’t intended to be exhaustive, but it does share a number of places I’ve discovered and strategies I use for enjoying cheap Danish food. This post is dedicated to general types of venues with budget friendly food. In a later post I will outline specific recommendations and venues.

Also see my guide, ”Where to eat in Copenhagen for less than 100 DKK” where I make specific restaurant recommendations for budget friendly food in Copenhagen.

They also offer them in a wide variety of shapes, sizes, and forms. Prices typically range from DKK 19-35 per dog. You can also find a beef or “Bøfsandwich” which is a bit like a Danish Sloppy Joe. These are an ok snack, but most folks will need at least two dogs to fill up which ratchets up the price considerably. 7/11 also offers a mixture of foods including hot dogs, small salads, and other-like kind snacks. It’s not a great option and their prices are a bit high for what you get, but it is still relatively cheap and a good option if you’re in a pinch.

These are your best bet for a filling budget friendly meal. They’ll all provide kebab (usually beef/lamb mix) and falafel (vegetarian) while most will also have chicken. While not terribly healthy, these aren’t nearly as unhealthy as many other options. It is also the go-to budget/ethnic/drunk food in Copenhagen. These shops also, though not always, serve pizza.

The kebabs come in one of two formats: Pitabrød or Durum. The first is the smaller of the two and comes in a pita, the second is larger and wrapped in something resembling a tortilla. Fixings vary but usually include a yogurt sauce, lettuce, tomato, onion and the potential for a tasty but not terribly spicy chili.

There aren’t a ton of kebab or pizza places in the city center, but there are a few. The highest concentrations can be found in Nørrebro and Vesterbro. Prices will also be cheaper the further you move from the city center. The price of a Pitabrød should range between DKK 20-30 and a durum between DKK 30 and 40. Keep an eye out for a mix option, as that’ll let you pick up a good bit of extra meat for a minimal price increase. In Nørrebro in particular you’ll find that many of the kebab shops run lunch specials, especially along Nørrebrogade.

Pizza shops typically start at around DKK 50 for a pizza and go up to around DKK 80. Pizzas in Denmark are often roughly plate-sized and good for 1-2 people depending on your appetite. It is common to find kebab meat and kebab chicken meat used on the pizzas, so be prepared for slightly different flavors than you may be used to. Many pizza shops also run lunch specials which can drop the price of a pizza to as low as DKK 39 but often brings them down to around DKK 50. If you want to keep to your budget, consider a Pizza for lunch instead of dinner and then rounding the meal out with a kebab for dinner.

A third type of kebab shop can be found that has kebab skewers in addition to pitabrød and durum meat. These are predominantly found in Nørrebro with plates usually falling in the DKK 65-80 range. Plates often include two meat skewers, rice or french fries, and a small salad. The meat is cooked over coals and heavily inspired by Turkish kebab.

These are largely confined to the city center and cater predominantly to tourists. Quality varies widely, but in general they’re not likely to kill you and typically range in cost from DKK 50 DKK to DKK 90 for an all you can eat buffet. The easiest way to find them is to walk Strøget (the main shopping street) while looking for people holding up signs or to visit one of the three I’ll mention in my follow-up post.

With the bulk of their prices falling between DKK 40 and 60 sandwich and bagel shops can be found all over the city and usually offer filling, albeit light, options. Produce in Denmark tends to be very high quality and extremely fresh, so these are often a very popular option among Danes and tourists alike.

Small, local, smørrebrød shops are something that you typically have to seek out or research in advance. They can be found scattered throughout the city, and sell Denmark’s most common lunch-food. Prices for smørrebrød can fluctuate wildly but budget variations can be found for between DKK 12-15 a piece. Expect to eat 3-5 for a meal. These shops often close by 2 or 3PM and are lunch/brunch only.

I’ve only recently discovered these. As a big guy with a big appetite I spent a lot of time scoffing at the city’s plethora of salad bars. In reality, however, these offer surprisingly tasty and filling options. Particularly because most include a piece of heavy danish rugbrød with your order. The typical format includes a few pre-set menus that let you order three, four, or five different “salads” which range from spinach to chicken and noodles. A filling three item menu usually runs about DKK 50 and is sufficient for a meal.

If you’re like me, cooking lunch or making your own sandwiches is all well and good…but sometimes just not something you’re up for.

Luckily, while nowhere near as extensive as the Delis in US supermarkets, Danish markets often have a few options available. While you won’t find much of an offering in the budget supermarkets like Netto, Fakta, or Rema 1000 you will find them in some of the larger markets such as Super Brugsen, Føtex, and Kvicky. Food quality can vary widely, but you’ll also find cheap access to traditional Danish foods such as cooked pork, fish fillets, and some variations of smørrebrød. These are also a great alternative to the fancy Danish bakeries when you go seeking that tasty ‘Danish’ or dessert.

Unfortunately, take-out in Copenhagen is still quite expensive.

Dominated by Asian and Indian cuisine, meals often start at around DKK 70. These qualify as a tasty option for less than DKK 100, but aren’t anywhere near the cheapest option you’ll have in Copenhagen.

Still, if you’re looking for take-out or a sit down meal, the small ethnic dives that can be found throughout the city and are most common in Nørrebro and Vesterbro are a great option. They’ll also usually provide you with fairly hearty portions.

McDonalds and Burger King are the default for many travelers when on a budget crunch. However, neither are particularly budget friendly options in Denmark. With a Medium Big Mac Menu going for around DKK 55-60 and the Whopper Menu starting between DKK 60 and 70 you can get a much better meal for the same money. Both do have budget menus, but even a basic cheeseburger typical runs around DKK 10or USD 2. Considering KFC [Kentucky Fried Chicken, ed.] ? Good luck.

Any suggestions? Any further, general cheap eating tips? Feel free to comment below.

In the second part of this, the guide ”Where to eat in Copenhagen for less than 100 DKK” , I make specific restaurant recommendations for budget friendly food in Copenhagen.

Alex Berger is a Communication and Cognition Master’s graduate based in Copenhagen. You can follow his latest travels on his blog, VirtualWayfarer.