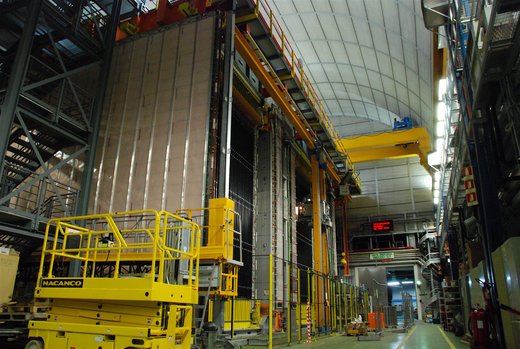 After a shocking result from the underground CERN facility, Copenhagen physics PhD speculates on 'extra dimensions', but places his bets on systematic error

Einstein’s relativity might be wrong. Last week, a team of more than 150 physicists working at the so-called Opera experiment pre-published a paper showing that neutrinos may travel faster than the speed of light. University of Copenhagen physicists from the Niels Bohr Institute are involved in the research.

The Opera experiment is set in Italy near L’Aquila and it has been designed to detect neutrinos emitted at CERN, in Switzerland. Initially neutrinos are produced with many other sub-atomic particles, but they are the only ones able to travel unscattered for over 700 km through the earth.

Neutrinos have been revealed at the Gran Sasso laboratory in Italy a few nanoseconds earlier than they were supposed to. If proved right, this means that they travel faster than the speed of light. This goes against Einstein’s relativity theory, that sets the speed of light as the highest speed a particle can travel.

Scientists are now testing the results with independent measurements.

»If this measurement is confirmed, it might change our view of physics, but we need to be sure that there are no other, more mundane, explanations,« said CERN Research Director Sergio Bertolucci in the original press release.

The paper was presented during a conference at CERN and was greeted with a standing ovation.

Ask Emil Løvschall-Jensen is a PhD student at the Discovery Center of the Niels Bohr Institute. His research is focused on looking for new physics beyond the Standard Model, a theory which describes the interactions of known subatomic particles

»Even if the latest result turns out to be true, we do not know yet how to explain it. There are various theories available; some of them are quite exotic and involve for example extra dimensions,« he says.

»In any case, if the result will be proven right it will send a shock wave among researchers, because we don’t expect neutrinos to go beyond the speed of light,« he adds.

Relativity is hard to kill

»I think the experiment is very high quality: The Opera team considered 15,000 particles and the statistical analysis they did is good and robust. Still, it is possible that there are sources of error that have not been taken into account,« Løvschall-Jensen suggests, before speculating:

»It is too harsh to say that it is not possible that a particle travels faster than the speed of light. Still, I bet the result is affected by systematic error, because it is so far away from all the known theories. But this does not imply that the results are not true,« Mr. Jensen underlines.

If the result published by the Opera team is proven, it will lead to new physics. »The Standard Model would need to be reviewed. But Einstein’s relativity could still be right« .

Check out this cartoon about neutrinos below: