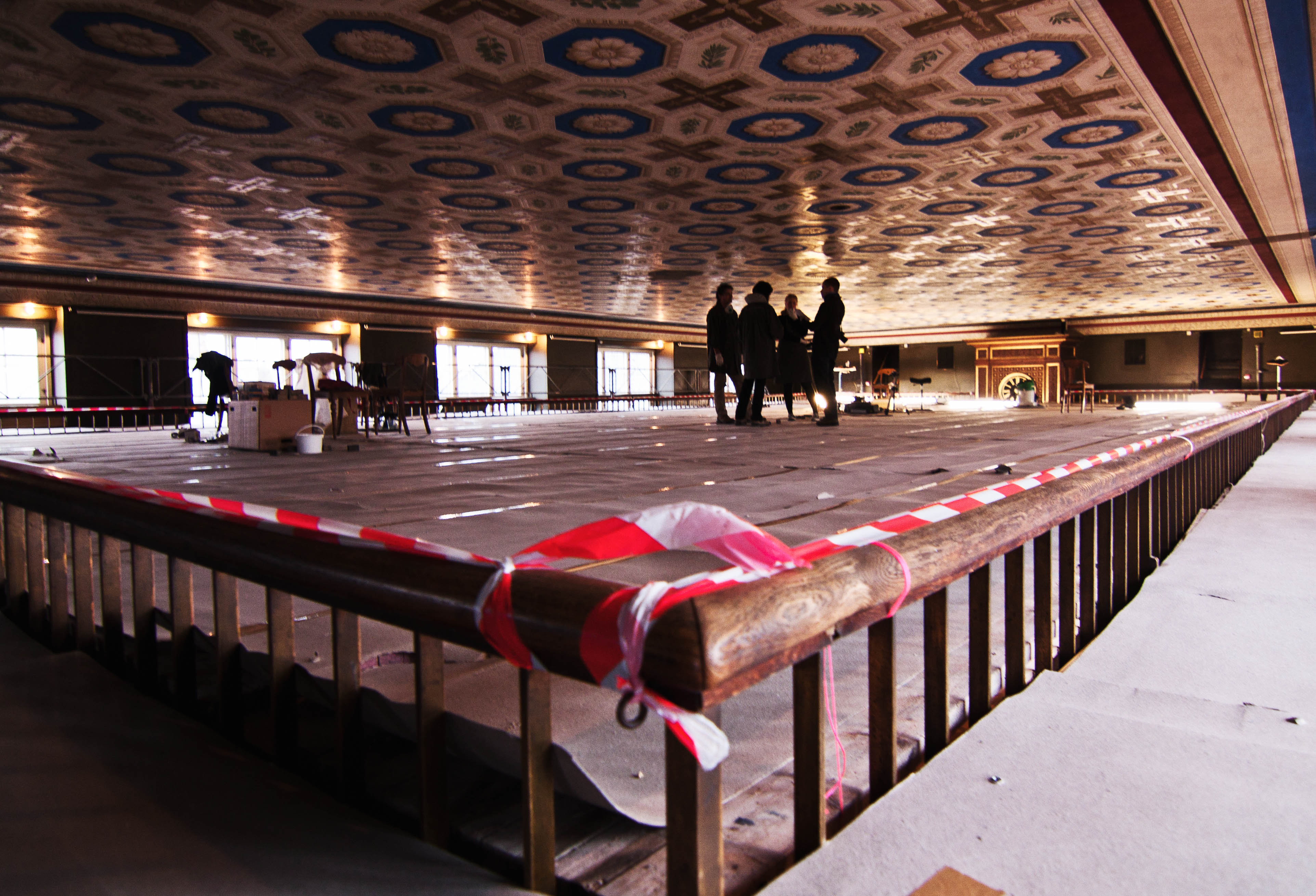 Luckily for the reporters, the platforms completely obscured the hundred-foot drop to the floor
image: Victor Yakimov

Conservators, some of whom have restored the St. Peter’s Basilica at the Vatican in Rome, are trying their hand on one of Copenhagen’s iconic spaces

They are high up in the air, supported by platforms under the ceiling.

Luckily for these University Post visitors, giddy at heights, the platforms completely obscure the vast drop to the floor.

A group of conservators are restoring the ceiling of the Ceremonial Hall, the University of Copenhagen’s historic interior which is the venue of high profile lectures, visits and the annual Matriculation Ceremony.

According to Bo Kierkegaard, who is managing the project, it started because plaster was literally falling from the ceiling down to the floor below.

The falling plaster not only threatened the integrity of the ceiling, but ultimately the whole Ceremonial Hall, he says:

»What we are doing now, is removing the surface dirt. We are also re-setting the nails that penetrate through the surface structure of the ceiling. The nails were originally placed to keep the plaster onto the overlying wooden framework.«

When we turned up to visit, conservators Roberto Voncina, Umberto Tripi and Cecilie Gregers-Høegh were meticulously cleaning the original ceiling. It was originally made by Georg Hilker in the 1860’s.

We are taken to one of the final dark spots on the ceiling.

»We always keep a dark spot, so that when we are finished we can see the difference,« explains Roberto Voncina.

Let there be light

She, and Umberto Tripi, go on to explain that Hilker used a ‘tempere’, rather than a ‘fresco’ technique.

As a team, the two worked the Basilica of Saint Peter’s in Rome, and a number of artworks damaged by the earthquake in Umbria, Italy.

So what is to be expected when all the scaffolding is gone, and you can look upwards from the bottom of the Ceremonial Hall?

»Before the ceiling was dark, now it will be light!« says Umberto Tripi.

People will start looking up

Roberto Voncino speculates that whereas »the focus in the room before has been on the pictures adorning the walls, people will now look upwards instead«.

Maybe the next job is to restore the pictures.

See the photo gallery of their restoration work under the ceiling here, or below.
See pictures of the last Matriculation Ceremony held here, to get an idea of what the hall looks like when it is not a building site.