Farmers to use insects as their new livestock 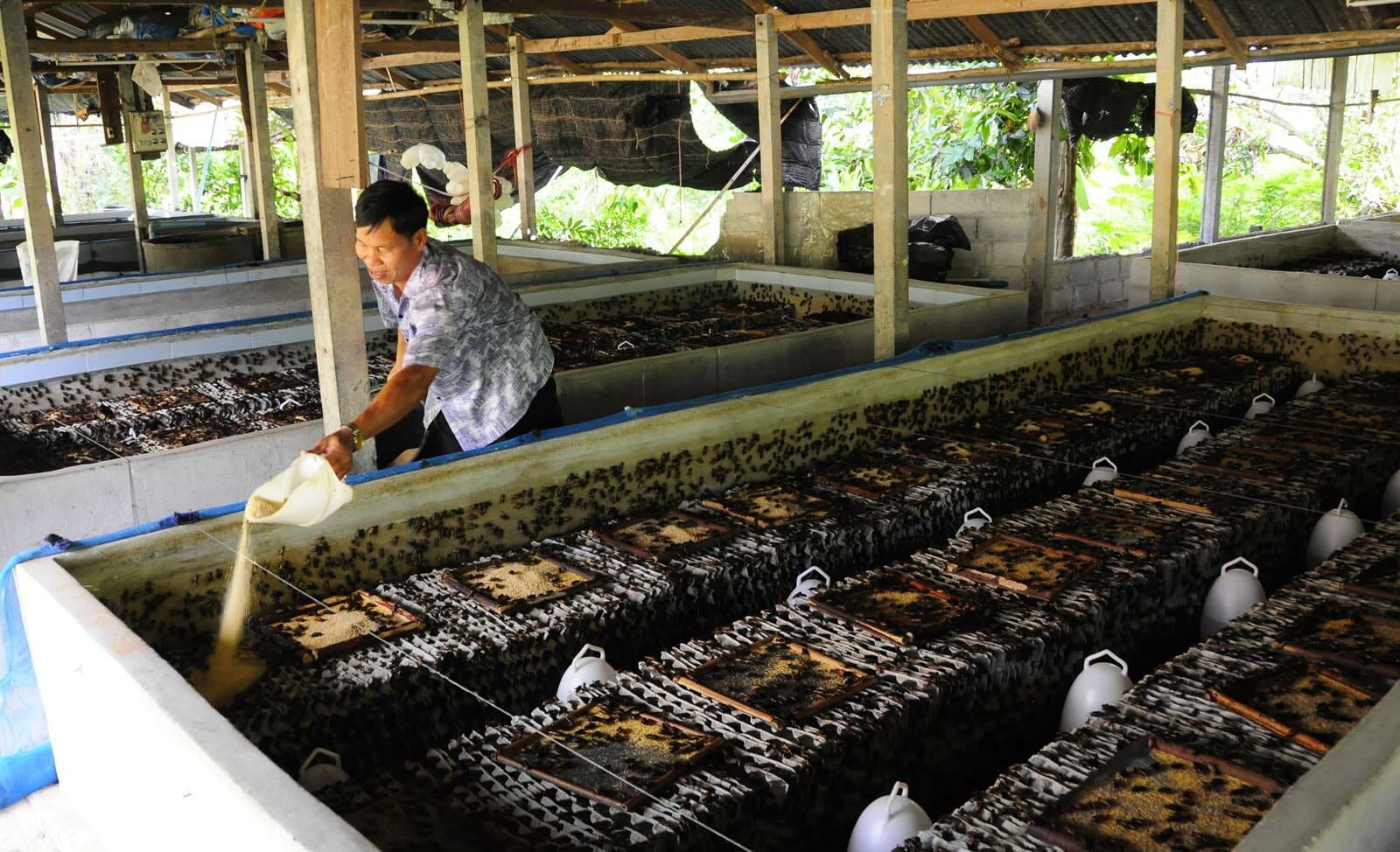 Research relay — Associate professor Nanna Roos wants to create a food production of insects and her first endeavors to achieve this took place in Kenya through the project GREENiNSECT.

Egg trays are stacked on top of each other reaching a little under a meter in height. These egg tray formations fills up hundreds of pens in the large barn and in them, it crawls with thousands of brown and six-legged bodies. The buzzing drown all other sounds at the cricket farm. Neither the sight nor the sound are what one normally would connect with farming, but this Associated Professor in Nutrition Nanna Roos plans to change. She recently finished her project GREENiNSECT that aimed to incorporate primarily crickets into the foods and black soldier flies into the feeds in Kenya.

Insects are a green way to produce animal food because they recycle leftover-products that otherwise would be lost. This is of special importance in Africa, where forecasts say that a generation from now, there will be an explosion in the demand on animal foods because people get out of poverty. To diminish the climate and environmental impact of this, Nanna Roos hopes, Africans will choose crickets instead of for example pigs and chickens.

“If we can replace some of the projected explosion with insects, then, I think, we have contributed with something good,” she says.

Originally, Nanna Roos got the idea for GREENiNSECT during a research project on how to improve child nutrition in Cambodia and Kenya called WINFOOD. While she tried to find local foods in Cambodia and Kenya that could improve child nutrition, she discovered that giant hairy spiders and termites were on the menu. In developing countries, there is a lack of animal foods, which makes insects perfect especially because of their high quality proteins. This discovery planted the idea for what later became GREENiNSECT. However, even if good arguments concerning nutrition and the environment persuade consumers – it is not straightforward to get insects on the diet.

“You need to start up a whole new production sector,” Nanna Roos explains.

The farmer of a miniature world

Insects are aliens in a farmer’s world. What to feed them, do they grow the best in cold or hot temperatures and how does a sick insect look? When it comes to hens and cows all of these unknown factors have been optimized and adjusted over hundreds of years. Especially the size of insects pose a challenge:

”It is to learn to keep a new farm animal that also has a whole other dimension because they are so, so small,” Nanna Roos explains and adds: ”Everything is in a miniature scale compared to if you have a goat where you can see if it is well or not.”

If a stock of crickets look tired and weary, the Kenyan farmer needs to observe it before it is too late. He also needs experts who know how crickets look if they are unwell and how to treat them. Nanna Roos has encountered a problem in this area, which was that the farmers did not see if the crickets laid eggs, or not.

You need to start up a whole new production sector

”You learn to observe, combine this with knowledge and then convert it into praxis. In order to do so, you have to be in situations, where you watch what happens,” Nanna Roos says.

Farmers need time to gain the needed experience on this new miniature world. Furthermore, a project called INSEFOODS has taken over on the capacity building in Kenya when GREENiNSECT rounded up. They continue to train Kenyan experts on farming of crickets and black soldier flies who can help the farmers. 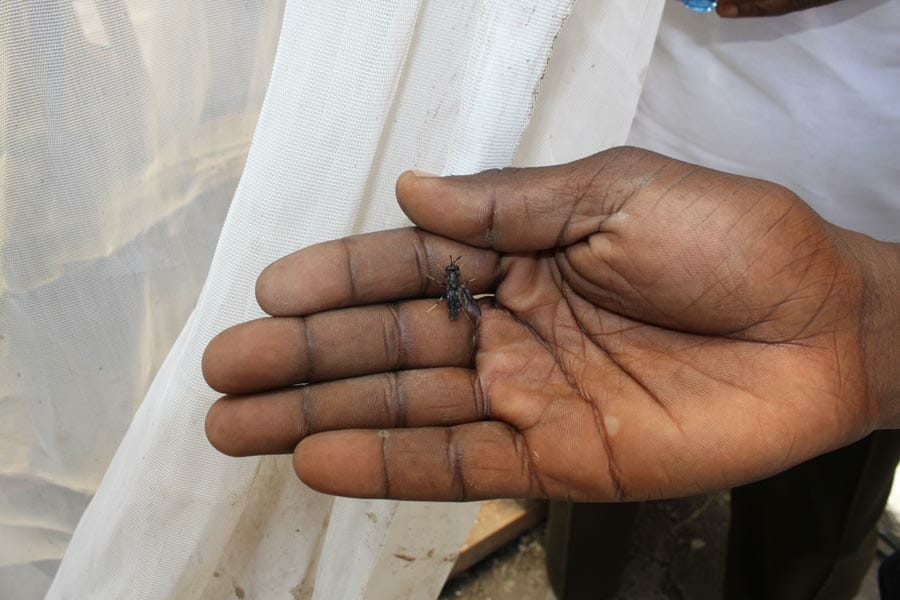 ”You learn to observe, combine this with knowledge and then convert it into praxis. In order to do so, you have to be in situations, where you watch what happens,” Nanna Roos says.

Farmers need time to gain the needed experience on this new miniature world. Furthermore, a project called INSEFOODS has taken over on the capacity building in Kenya when GREENiNSECT rounded up. They continue to train Kenyan experts on farming of crickets and black soldier flies who can help the farmers.

Nobody says they eat insects

The reason why GREENiNSECT works with crickets instead of another insect is that there has been a tradition for eating crickets in Kenya. What we eat is according to Nanna Roos “determined by culture”. However: ”There is nowhere in the world, where it makes sense to talk about eating insects in general,” she adds and explains:

Associate Professor in Paediatric and International Nutrition at Department of Nutrition Exercize and Sports.

Background: Became Associate Professor at Department of Human Nutrition, University of Copenhagen in 2009.  Got a PhD in Human nutrition in 2001 from Royal Veterinary and Agricultural University, Denmark

Primary fields of research: Linkages between food production, diet, nutrition and nutritional status in vulnerable populations in low-income countries. The role of animal source foods in diets in low-income countries. Nutritional quality of complementary foods, incl. micronutrient contents and bioavailability and anti-nutritional compounds. Insects in food and feed. Small indigenous fish as a source of micronutrients in diets in Asia. Human intervention studies on nutritional quality of complementary food and food aid products

”If you go to Kenya and ask, if they eat insects, they would typically say that ‘they definitely do not’. Depending on ethnic groups and where you are in the country, they eat termites, grasshoppers and some would say that their grandparents ate crickets,”

You eat many different insects especially in the South East of Asia but on the other hand, there is even more, that you do not eat. Our culture can be an obstacle for us ever to eat some insects. For example, Nanna Roos thinks, we will never eat cockroaches because many associate them with dirty environments. Such a barrier Nanna Roos met herself when someone offered her an edible tarantula spider during her project in Cambodia.

“I could only get my-self to eat the legs,” she admits.

Other insects (even though spiders are not quite insects) are more appealing to her – her favorites are grasshoppers and crickets.

A peep into the future

During GREENiNSECT Nanna Roos and her team got a peep into the future of Kenyan cricket farming by going to Thailand. Thailand is 20 years ahead of Kenya, Nanna Roos explains. Here GREENiNSECTS partner the Kohn Kaen University started a commercial cricket production in the end of the 90’ies. In Thailand, GREENiNSECT saw there was a bright light at the end of the tunnel of the teething troubles of a new production. Nanna Roos said that the Thai farmers gave her great news. 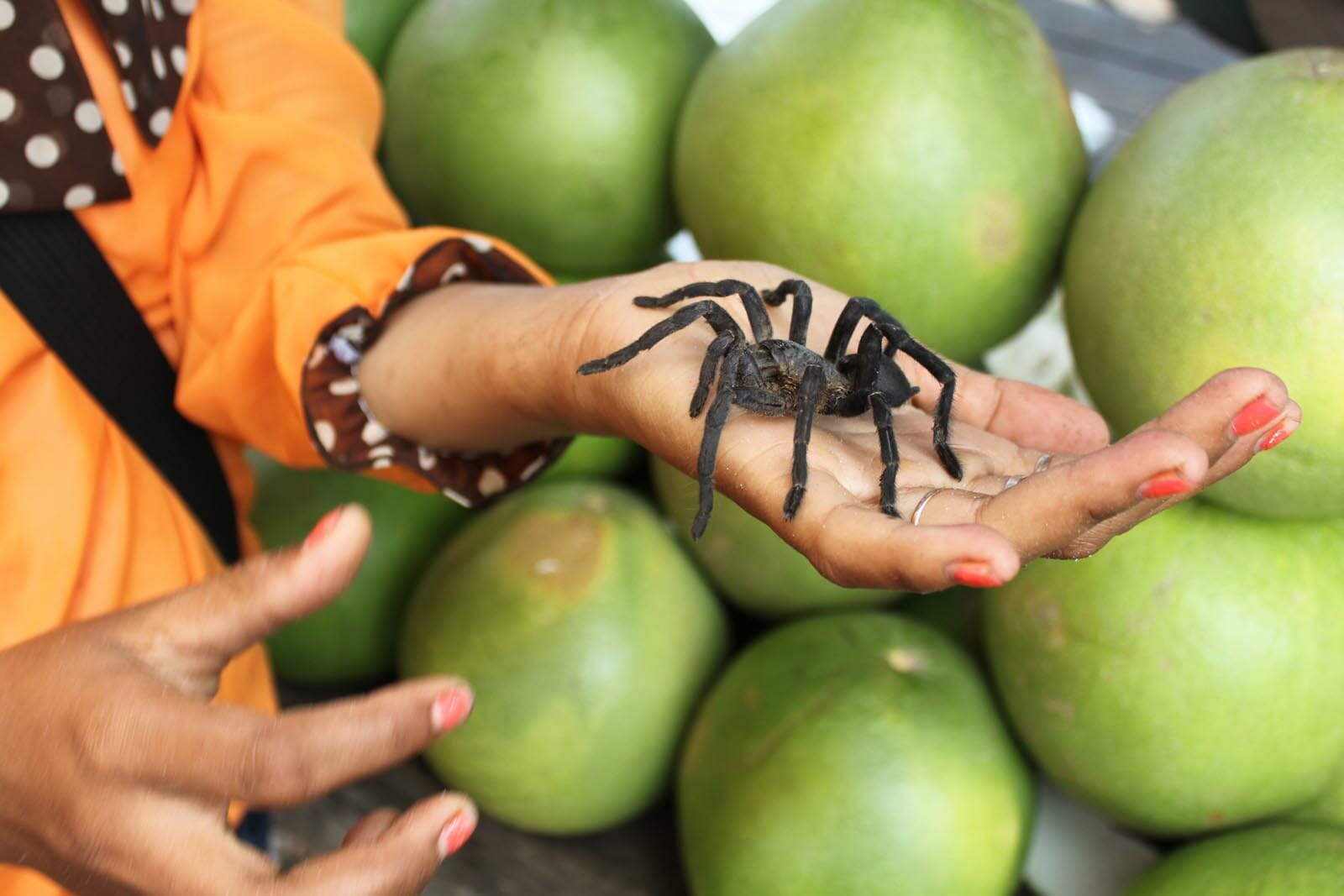 Nanna Roos was offered an edible tarantula spider during her project in Cambodia.
image: science.ku.dk

”It is so easy. I almost do not spend any time on it, I know I can earn a good amount of money – after six weeks I can harvest this ladder-system and sell them,” they said according to her.

WINFOOD: 2008-2013
The project aim was to support growth and nutrition in Kenyan and Cambodian infants. This was done through improved utilisation of locally produced foods and processing of traditional foods based on traditional animal-source foods (edible termites and spiders). Nanna Roos was project researcher and manager.

GREENiNSECT: 2014-2017
The project aim of Insects for Green Economy (GREEiNSECT) is to use insects in foods and feeds in Kenya, support capacity building on the subject in Kenya and produce scientific evidence in the fields of insect production, food product development, environmental and livelihood assessments. Nanna Roos was Grant holder and project leader.

InVALUABLE: 2017-2019
The project aim of Insect value chain in a circular economy (inVALUABLE) is to establish industrial insect production in Denmark. The project focus on mealworms and how to use them as component in foods. Nanna Roos is partner.

Nanna Roos also discovered what it means to build a community around the insect farming, where they can rely on each other.

“It functions the best when there are plural insect-farmers in a village. More buyers come to the place, they get a better price, they have fun together and they exchange eggs to avoid inbreeding.”

Nanna Roos has chosen to pass the interview-baton to Carsten Nico Portefée Hjortsø who works with capacity building, management and entrepreneurship.