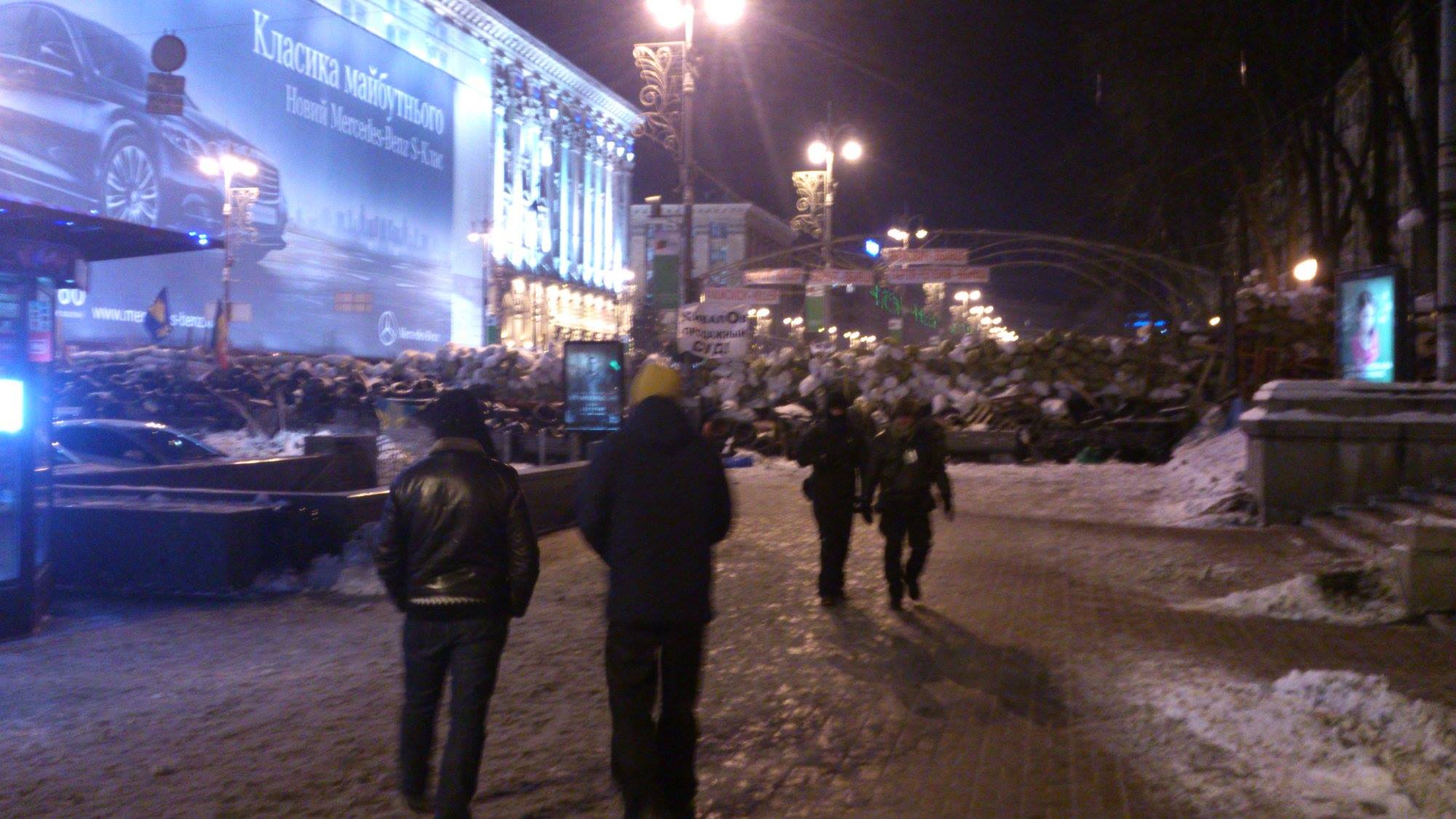 From the central square in Kiev, Ukraine, approaching the barricades. "It is weird how you see the remnants of the previous reality. You have the expensive cars on the billboard. But you already have the new reality," says Sergiy Matyushenko
image: Sergiy Matyushenko

One month ago, and on the brink of a civil war, a University of Copenhagen student from the Ukraine took a night drive. He wanted to help bring money to the then-occupied central square of Maidan in Kiev. Here is his account

It was a nice trip.

You know, the one when you’re in the car with your best friend after a long separation. The distant lights ripping up the darkness in front of the car. It’s warm and cozy inside – mostly because of those -25 degrees outside the car glass.

Driving in the darkness makes you even closer: small unimportant conversations from time to time dilute the big austere meaningful silence. “I missed you..” stays unsaid.

I know Yura better than saying it.

We’re on the way to Maidan. My first day in Ukraine after more than half a year since my last visit. Ukraine feels so sharply different this time.

We’ve been in touch all this time, yet I never heard a word about him driving to Kyiv (Kiev) three nights a week (we both come from Zhytomyr – our hometown lies 130 km west from the Ukrainian capital) loaded with food, wood, warm clothes and old tires.

“The Internet’s not safe”, he explains.

And now, in the car, all the things about Maidan I’ve picked up on the internet, powered by things I’ve touched, start forming into a massive gruesome picture of “civil unrest”. And it’s an uncomfortable strange almost Boschian reality to plunge into.

I have a task. A little community of my friends here in Copenhagen collected money for Maidan – I’m taking it there. In cash. Opposition accounts are being shut down in Ukraine every day. While we’re still working on finding ways how to collect and transfer money from Denmark, some of us were fast enough to use the opportunity of my vacation – that’s how I’ve got the task.

There’s a person in Kyiv whose contact information I was given back in Copenhagen, now we’re on the way to Kyiv where he’s waiting for us.

And this feeling of conspiracy, it’s real, too: “Dear subscriber, you have been registered as a participant of civil unrest”, I am reading on my friend’s phone; this SMS started circulating around soon after Maidan emerged, and many my friends who visited Maidan received it. Yura chuckles: “SMS don’t bite..”

Here it is – Maidan. First thing that surprises me: it’s huge! The frontier barricade on the Khreschatik side is in my estimation up to 5-6 meters high. There’s a check point, we pass freely, all the cars are stopped at a narrow drive-in and some are being thoroughly checked.

From the very first moments endless associations with a military camp: well-organized, efficient, utilitarian. Dozens of tents, hundreds of people, thousands of slogans. Smoke rising up in the air from each tent provoked reminiscences of small idyllic villages in winter – exactly the way they are routinely depicted on post-cards and children’s books.

Just before my visit, protesters erected a watchtower (!) guarding the slope of the Institutskaya street (I’ve also heard of a large stationary catapult designed by protesters, but I’ve never got to see it myself). Regardless of the warnings I do not find Maidan deserted – people are there.

A gigantic anthill that never sleeps

We’re making our way to the heart of Maidan – the House of Professional Unions, a remarkable building just on the corner of Khreschatik (the main street in the center of Kyiv) and the Independence Square (the central point of the city – in Ukrainian “Maidan Nezalezhnosti” which has become simply Maidan).

It takes us ten to fifteen minutes to pass the check-point at the entrance: we are waiting for somebody Andriy called before in order to obtain the pass. All this time I spend staring around – I’m in the heart of revolution.

Ages vary. I see teenagers and I see elderly people: many are equipped in a military-like fashion, helmets, clubs, shields; a middle-aged doctor is passing, wearing surgical coat with drops of blood on the sleeves; two young girls are walking by, almost groaning over a huge bucket of hot soup. The first thing that springs to mind is that it’s after ten at night and nobody is idle, the atmosphere resembles a gigantic anthill that hardly ever sleeps.

Finally we’re through and on the way up. Up on the last floor. They also have a check-point at the entrance, so I again get a couple of minutes to look around.

Young, too young, most of them teenagers or, at least, at their twenties. All are equipped with helmets, bullet-proof vests, knee-guards and elbow-pads, shields are standing all over the place, many of them are colorfully adorned with slogans and paintings. All along the walls there are mattresses.

Another striking observation: there’s a desk lamp by each of them, many are reading while some are sleeping. I catch myself at thinking I would love to walk around and see the books they read: books are telling, you know…

Somebody touches my shoulder, I turn around to see a tall man wearing military uniform with chevrons which I can’t decode, the man is wearing headscarf over his face; he’s accompanied by two others with their faces covered, too. The dialogue is brief and dry:

– I’m from Denmark, I brought money, here..
– Thank you. [the money is taken by one of the guys guarding at the check-point; the tall guy shakes my hand] We appreciate your support.
– We’re all with you.
– We know. Glory to Ukraine!
– Glory to its heroes!

That’s it. We take stairs down, in a minute we’re outside. I’m depressed: I feel as a tourist, completely out of touch with this reality. To increase the feeling, Andrey suggests making a tour around Maidan towards Hrushevskogo – the site of the fiercest street battles. The first victims of the revolution died there. We start walking.

In reality Maidan is surrounded by several levels of fortifications: the first circle limits the actual area of the Independence Square itself, then there are several more circles indicating the later progress of the protesters.

When we approach the front outpost of the Revolution – the Hrushevskogo street – the scenes are turning into a real urban battlefield landscape: the buildings are burnt, the window-glasses missing, the cobblestones are gone. It looks, sounds, smells, feels like war; well, the way I can possibly imagine war – the person who’s never been exposed to images of mass violence and state turmoil.

The front barricade is by all means an outstanding masterpiece of street riot culture (excuse my pun): it’s a double barricade with an irregular terrain similar to a ramification of trenches in between (again entirely based on images borrowed from war films) where there are old fuel barrels serving as fire-places where small groups of protesters were camping.

TV for the riot police

We are climbing up the very front barricade – here they are: the enemy lines. The riot police are standing in line just thirty-forty meters away. Their shields are gleaming in the darkness, you can clearly see them.

To further detach the look of it all from reality the bizarre psychological opposition is also taking place: the protesters installed a huge screen broadcasting Hromadske.tv online (the main independent TV channel) – the screen is turned towards the police lines.

From the police side, on the contrary, a weird folk (remarkably, non-Ukrainian) music is wafted to our ears. I catch myself at thinking: “When I go schizophrenic, it’ll be like this…” Beside me there’s a man standing up on the very brink of the hill-like barricade and screaming abusive, almost poetic, rubbish at the police; at that, he’s courteously informing them of his name and the city he comes from. I think I can hear some answer from the other side. It all doesn’t give the feeling of hatred or anger: a lazy inoffensive squabble, I’d say…

We go back to the car. Yura and Andriy are talking to each other about things that are beyond my knowledge: unlike me, they live on the ground. I ask Andriy about what he thinks is going to happen. He cuts short: “Bloodshed”.

Why, I ask. “Too many people that won’t go anywhere from here, it’s too late for them. They have weapons, too…”

It was the night of the 30th of January. There had been 4 casualties back then. The official number of people who died in Kyiv in January-February 2014 is now 95 people. The number is still growing.

See a few more pictures from my night on Maidan below.