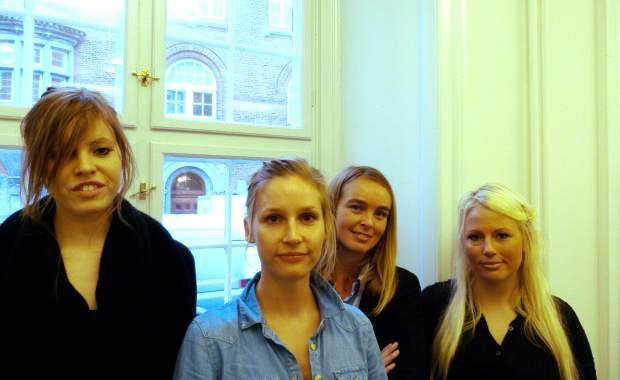 If their mix of charm and determination is anything to go by, Christina, Louise, Sinja and Ann Marie could win the 2011 Copenhagen Competition. See how they are preparing for the finals

The game is getting hard for the home team participating in the law contest Copenhagen Competition 2011. They passed the written round and they are now preparing for the oral round, which will be hosted by the Faculty of Law from 29 November to 1 December.

The Copenhagen Competition is an international negotiation competition at the Faculty of Law at the University of Copenhagen. Last year a team from Jerusalem, Israel team took first prize.

The Copenhagen team is the only European team participating in the finals and is made up of four Danish girls: Christina Blaunfeldt, Louise Wichmann Madsen, Sinja Kongshøj Laursen and Ann Marie Willemoes Jørgensen. The University Post met them in the beginning of October for a morning interview.

The Kingdom of Isles

Could you explain to us what the subject is of this year’s competition?
»The competition is about access to food, which is a human right. In order to grant access to food, the main issues are to check that enough food is produced and that it is distributed equally,« Louise says.

»Access to food is a huge topic, dealing with practical questions such as how much food is needed, when it is needed and where and how to do this. For example, should farmers use GMOs [genetically modified organisms..ed.], or should they focus on organic food? The topic is very interesting, and we know a lot more about agriculture than a few months ago!« Sinja adds.

The name of your team is “The Kingdom of Isles”. Why?
»It is just a fictional name that we have to use, because even if we are representing Denmark in the competition, we are not bounded by Denmark’s policies. During the competition, fictional names are used to avoid frictions between the teams and their countries,« Sinja continues.

How are you preparing?
»Well, we are in a training camp and we are working very hard!« says Sinja, joking. But not too much.

»We are more or less always talking about topics related to the competition… even when relaxing with a glass of wine together we often end up talking about GMOs and related issues. Actually, also with friends and family. We are not the best company right now, but hopefully it will pass in a few weeks,« Christina adds with a smile.

»Seriously speaking, our strategy is to try to get inside the heads of the other teams. We have no idea what they will present in the finals, because they, or we, are not bound by the reports submitted in the first part of the competition. So all we can do is to read what the others wrote, trying to extract the points they have and the arguments they will probably use. In this way we can prepare the right counter-arguments. We are also working on the strategic part, deciding on how much we are going to give, what are the aspects we don’t want to negotiate and if we will have a laid back or aggressive approach,« Louise says.

Besides the official rounds, there will be time for unofficial negotiations among teams: During the finals they will live in the same hotel for three days, and there will be chances to meet and discuss.

»We will try to focus on negotiating rather than on debating. Since the point of the competition is finding a practical solution to a real problem, and not just practice rhetorical skills« Ann Marie explains.

Do you like the topic?
»Yes, and it is very interesting from a legal point of view: the issue hasn’t been much regulated and it is challenging to learn to deal with such an open problem,« Christina adds.

»We will try to keep the debate on the legal level and avoid getting too much into politics. And at the same time we will keep in mind the complex background, that involves politics and economics,« underlines Louise, that is currently taking courses at the Institute of Economics as a supplement to her education in law.

»In law making you have to formulate effective proposals that have to work in the real world. You can’t be too idealistic. Moreover, it is a very interdisciplinary topic,« according to Sinja.

Are you interested in a diplomatic career?
»This is what we want to do in our lives. The negotiation world is a very tough environment, where there can be a lot of pressure, especially when a deadline is approaching. It has to be fun to work in such an environment, otherwise you will hate your job, and that is not good,« says Louise as we wrap up our meeting.

The University Post will, of course, be on the spot for this event with updates, reports and photo galleries.