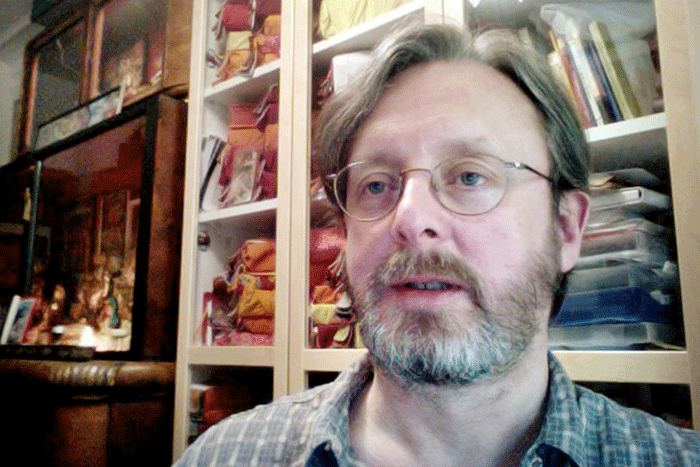 Tibetologist Jan-Ulrich Sobisch was fired by the University of Copenhagen when Tibetology was shut down this year. He is now being honored in Germany for his work.

Jan-Ulrich Sobisch was fired as lecturer in tibetology when the University of Copenhagen (UCPH) decided to shut down the field of Tibetology earlier this year.

Sobisch had worked at the Department of Cross-Cultural and Regional Studies for 13 years and had on numerous occasions criticized the management’s decision to ‘massacre’ the small humanities subjects.

Now Sobisch has left the austerity hit faculty. Things have changed for him for the better and on 27 October he received a message informing him that he would be receiving the 2016 Humboldt Prize also known as the Humboldt Research Award. He was the first ever Tibetologist to receive the award.

“It is a great honor for me, especially because the prize is not given to someone for a specific piece of research, but rather as recognition for a researcher’s work and accomplishments over the course of their career. The prize is given to academics, whose fundamental discoveries, new theories or insights have had a significant effect on their field and who are expected to deliver groundbreaking discovers and research in the future”, (www.humboldt-foundation.de/web/humboldt-award.html), writes Sobisch in an interview via e-mail to the University Post.

Management gave him something akin to 6 months of silent treatment

Sobisch finds the UCPH’s management’s handling of his dismissal hard to take and comprehend.

Because of the notice period, there was a timeframe of 6 months from when Jan-Ulrich Sobisch was fired to his last working day at UCPH in September. For him it was a 6 tough months:

»Now, when I think about it, I feel like I was freed from a nightmare«

“From the time I was put on notice about the termination of my employment until the time I stopped working, I was not at any point contacted by the Head of the Department or the Head of Studies, either in writing, on the phone or in person. So I left UCPH without talking to anyone who was part of the management and without receiving a goodbye,” Sobisch writes about the firing that triggered a lot of surprise and objections from all around the world.

“There were almost a 100 letters and e-mails that objected to me being fired that were sent to the Head of the Department, the Dean and the Rector. Professors from Berkeley to Beijing wrote very heartfelt and personal letters expressing their dismay about my dismissal. One such letter was from the Office of the Dalai Lama. Everyone highlighted UCPH’s long tradition of Tibetology research and emphasized that UCPH was the only university in Europe that offered an education that included a combination of the historical, Buddhist and modern aspects of Tibet”.

Help from his peers

As soon as Sobisch was fired in February, he started looking at his future options. However, in the world of research 6 months is no time at all, writes Sobisch:

“Most research foundations have a deadline for applications only once a year and that meant that the deadlines had either expired or were too far into the future. Moreover it takes months to write a serious research application. And afterwards, most of the foundations and institutes take months – sometimes 6 months – to examine the applications.”

Sobisch says that despite this, the overwhelming support that he received form the international academic community motivated him to keep looking for opportunities and that he already, started to write applications. Ever since then things have happened in rapid succession.

Colleagues in Vienna and Nepal helped provide Sobisch with some short term contracts to start off with, and from May until October 2017, Jan-Ulrich Sobisch will work at the International Consortium for Research in the Humanities, at the University of Erlangen. He will then use his prize money at the Center for Religious Studies, at Ruhr-Universität Bochum. And then he hopes that his application for a three-year research project will be accepted, so that he can continue working on some texts from the 13th century that he recently discovered in an archive at The Guimet Museum in Paris (Musée Guimet).

Freed from a nightmare

Today Jan Ulrich Sobisch avoids talking about his dismissal from UCPH because he finds it difficult to ‘keep those emotions in check’.

”I feel extremely honored and the award reduces the emotional toil of the dismissal. It was the entire way it was handled: That I was fired after 13 years of service, basically because of an e-mail and did not receive any support from the management. And it is very sad because we started in the Department of Cross-Cultural and Regional Studies with big plans for the future and with a lot of trust and confidence in our management.”

“I am thankful for being able to work on my projects for so long and I have always enjoyed teaching. I continue to have a lot of veneration for my kind colleagues and friends at the department, but the past few years filled with constant threats of shut downs and the lack of transparency regarding decisions have left its mark. I feel sorry for my close contacts at the department because I know about their working conditions and know what they are going through.”

“Now, when I think about it, I feel like I was freed from a nightmare”