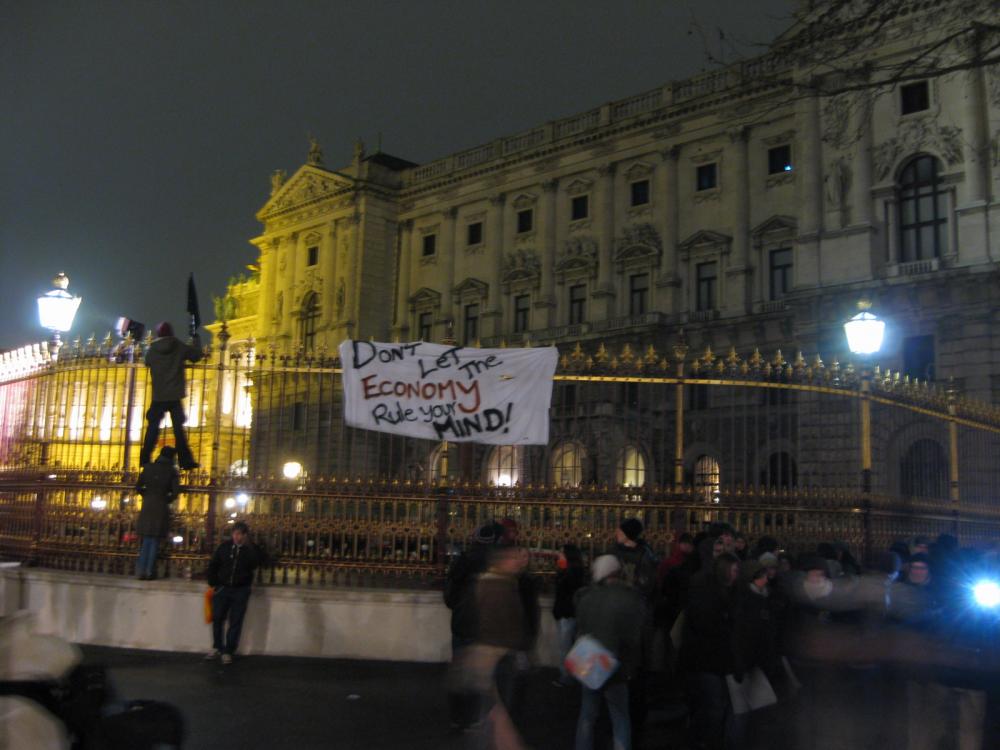 From the 2009 Unibrennt and Bologna reform protests
image: Marie Czuray

In Denmark students protest against the government's plans to downsize study programmes. Back in 2009, the 'University Burns' (Unibrennt) mass protests in Austria were the biggest thing in Europa. We asked a protester to look back

Sit-ins, flash-mobs, guerrilla-communication, parties, the disturbance of stage performances. All tools of protest at the 2009 Austrian ‘Unibrennt’ protests.

Interesting in the context of Danish student activism against the the government’s plan to downsize selected study programmes.

Inge Chen was a political science student who participated back in 2009. Now she’s graduated and speaks to the University Post about how the protests put education on the Austrian agenda.

See the University Post’s article on how Danish student protests compare to those in other countries here .

1. What were you protesting against?
“#Unibrennt, translated as “the university is burning” was the motto of the 2009 student protests in Austria. The protest was sparked by the attempted implementation of the Bologna agreement’s Bachelor and Master system at the Academy of Fine Arts in Vienna. It ultimately addressed widespread problems in the Austrian higher education system.

“The implementation of the Bologna process combined with the notoriously underfunded universities had caused increasingly bad studying conditions. In Austria, less than 1.5 percent of the GNP is used for the higher education system. This is approximately the EU average but below the average of the OECD countries (data 2009). ”

“The specific problems we were protesting included lack of courses, heavily overcrowded facilities, underpaid lecturers with insecure contracts, lack of funding for electricity and heating. The political criticism addressed the commodification of education, the question of education for refugees, lack of democratic structures within the university boards and the electoral legislation of the Austrian student union (öh).”

2. How did you protest?
“The protests started with a protest march. At the end, students squatted in the biggest lecture hall in Austria, the Auditorium Maximum at the University of Vienna. The squatting of the “Audimax” was a major disturbance to the regular work of the university. They remained there for two months until it was cleared by police. ”

“Over the next days, squatting spread to four universities in Vienna, and students began occupying universities across Austria. ”

“While the primary form of protest was squatting, other actions included marches, banners and signs, publishing articles in newspapers, sit-ins, flash-mobs, guerrilla-communication, parties, the disturbance of stage performances and many more. The protest was supported by unions, musicians and artists, journalists and notable figures, among them Jean Ziegler and Anti-Flag.”

“#unibrennt was also the first time in Austria, where social media played a crucial role in connecting people and spreading the message. It was an amazing experience. You could feel the hope and the power of people coming together and discussing things. Sometimes it was exhausting too. But in the end – because of the lack of political outcome – I think it was also very frustrating for many students.”

I hoped for a political impact

4. Why did you participate?
“I studied political science, and we already had a small protest against the studying conditions of the department. So when I heard that there was an occupation I was very curious, and I wanted to raise awareness about the issue. I also hoped that it would make a political impact and that future generations would have better study conditions.”

5. What were the impacts of the protest?
“The impacts and successes were very limited. At face value it prompted change and the ministry added 34 million euros to the budget, to relieve the public pressure. The electoral legislation was improved in 2014. ”

“However now we have the ‘STEOP’-system, a selection process added to the first year of studying, and the government cut the payment of a family allowance for people over 24. Universities are still underfunded and lack democratic reforms.”

“However the protests successfully raised the profile of education. There were some changes negotiated at the departmental level. The student union was strengthened and I joined the year after. Many of the student activists have gone on to work in fields such as migration, feminism, anti-fascism and anti-rascism.”

“There was also a wider social impact. The protests took place in winter so homeless people started using the occupied space. The students declared solidarity and raised awareness that people without Austrian or EU citizenship are denied access to homeless shelters. As a result, a new homeless shelter was founded which is accessible to everybody. Also, a new project called ‘Vinzi Rast Mittendrin’ was started, which is a house where former homeless people and students live together.”