For conference, the ash cloud had a silver lining 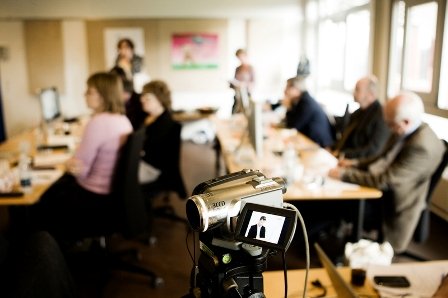 The KOSMOS conference was streamed live on the internet when volcanic ash closed airports and stranded delegates
image: Thomas Larsen

In the midst of volcanic ash cloud travel chaos earlier this year, University of Copenhagen conference organisers replaced a physical meeting with a virtual conference. This meant 2,000 participants instead of 130

Faced with airport closures and mass-cancellations, the organisers of a conference at the Centre for Textile Research used new technology to hold the international meeting online.

The virtual conference was a much greater success than the planned physical meeting, attracting 2,000 participants rather than the expected 130.

The organisers Marie-Louise Nosch and Robert Laffineur, thought on their feet. Together with the technical department of the University of Copenhagen’s Faculty of Humanities (It-Media) they managed to ‘live-stream’ the conference on the Internet and a chat room.

Delegates were then able to interact and leave comments and questions on the papers.

It-Media helped the organisers to put together a podcast in the new studio at the Faculty of Humanities, explains Web developer Thomas Schlichting.

They also asked delegates to send their presentations in so that they could still be part of the conference.

60 researchers did so, sending video presentations or power-points.

It-Media then set up live-streaming – a live video stream that was available for viewing on the internet.

This allowed stranded participants to follow the Copenhagen conference minute for minute from wherever they were in the world.

Finally, It-Media’s Annette Pedersen, who herself was stranded in Corsica, put together a chat function so that delegates could communicate with each other during the live video feeds.

The news of the online conference spread like wildfire, and this resulted in around far more virtual participants than the original 130.

The greatest challenge for the organisers of the impromptu virtual conference was to get the researchers used to chat communication, and to log in to the live-streaming.

»We were a bit worried about how we could give IT support to 130 researchers spread out all over the world, but luckily the programmes are very user-friendly these days,« he says.

»The participants were also very good at helping each other with technical problems during the conference.«

And the response to the virtual conference has been positive. A number of researchers who would not have been able to attend the conference due to financial reasons were pleased to be able to participate online.

»There is no replacement for the valuable networking that takes place at conferences, when researchers happen to get talking to each other during a coffee break. But it is not a question of either/or,« she says.

»I believe that in the future, there will be some participants who are physically present combined with others who participate via live-streaming or chat.«

»It is much easier to convince a hot-shot researcher to spend an hour on a live-stream from his own office than to spend three days travelling over the Atlantic,« she explains.