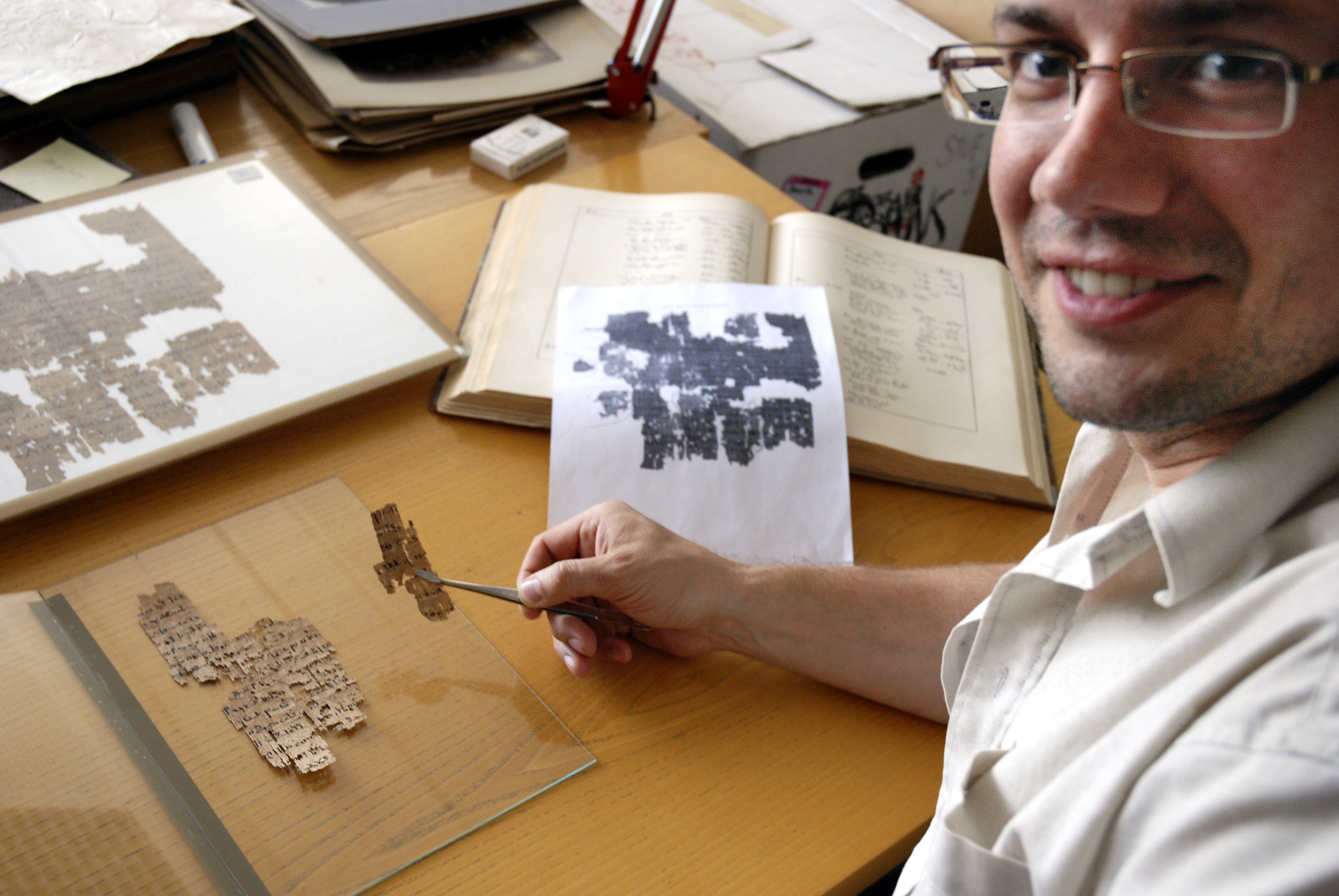 This is like the job of Egyptologist Kim Ryholt. But only almost, as he explains with a wide grin:

»In our papyrus texts, we don’t have the interlocking joins«.

The work of Professor Kim Ryholt from the Carsten Niebuhr Department involves uncovering layer upon layer of interpretation.

The texts that he is studying derive from the sole surviving temple library from ancient Egypt and date from around 100 AD. Most of them are copies of much older originals, sometimes going back a further two thousand years.

Many of these texts were subject to repeated re-interpretation and the temple library therefore preserves an image, an interpretation, of an imagined Egyptian past and future.

Confused? I admit that I was, a bit, at first.

Most of the Egyptian literature that has been left to posterity from the Greco-Roman period has been found in priestly communities, in what we now call temple libraries.

The papyrus texts include ritual handbooks, guides to the complex ceremonies performed each day towards the god who was thought to be embodied in a statuette in the inner sanctum, as well as scientific treatises, legal handbooks and narratives.

See also: Temples were for a constant ongoing ritual

For the Egyptians of the later Greco-Roman (323 BC to 200 AD) period, the pyramids and monuments which we associate with Egypt were ancient history just like they are to us.

So how did the Egyptians of the Greco-Roman period perceive the more-ancient Egyptian pyramids and their 3000-year historical past? Which kings were revered in their own history?

The jigsaw puzzles of papyri studied by Kim Ryholt may shed light on these questions.

Known for battles and pyramids

In the Greco-Roman period, the kings that enter into the literature fall into three categories:

First, the kings that built enormous monuments with carved reliefs, often describing large scale battles. Ramses II, for example, has the battle of Kadesh (1274BC) against the Hittite invaders carved for future millennia in stone.

Second, other kings entered the literary tradition by being associated as the builders of the large pyramids, like the massive Cheops pyramid.

»People could not, just like they cannot now, comprehend, the almost inhuman feat of building these massive structures out of two million blocks of stone, each weighing several tons. So Cheops is said to be a pharaoh who shut down all the temples in order to have the manpower to build the great pyramid. But this is not based on historical material, and is purely a futile attempt at explanation on their part. In my opinion, this is also completely implausible: In Ancient Egypt, you had to satisfy the Gods«, he says.

Finally, kings were remembered in the literature, if they were associated with large traumas in Egyptian history, Kim Ryholt explains.

»In these cases the scribes are dealing with actual historical memory, and this makes the texts more interesting. When the historian Diodorus visited Egypt in the 1st century BC, he saw the three large pyramids at Giza, and he heard that they were tombs for kings. This is something that we now know consider correct. But he also heard an alternative tradition, and people have not paid attention to this other tradition. The tradition is that the pyramids were monuments for kings associated with the greatest national traumas in Egyptian history«.

The kings were Ahmosis, the king that expelled the so-called Hyksos-usurpers in around 1550 BC – Armaios, a ruler that ended the Amarna period (1353–1336 BC) where the worship of other gods than the Sun-god was banned – and a later king called Inaros, Kim Ryholt explains.

»Until recently people didn’t know who Inaros was, and his identity was confused. But through the work with the temple library I was able to discover his historical identity. He was a local prince who rebelled against the Assyrians during their occupation of Egypt, around 665 BC«.

Kim Ryholt admits that he is one of perhaps a hundred people in the world that can read and decipher the demotic script.

»I have studied this so intensely, that I can often recognise individual scribes from the style of their writing«, Kim Ryholt says.

As he talks, Kim Ryholt and I go into a room filled with papyrus texts. It is as if we are going into the Carsten Niebuhr Department’s own temple library – its own inner sanctum.

He opens up one of several safes, takes out a papyrus enclosed between glass plates, and puts it on the table. He removes one of the top plates and moves a piece of the puzzle with one of the tweezers.

In front of these crumbling fragments, Kim Ryholt explains why the Assyrian invasion was such a trauma to the Egyptian priest-interpreters:

»At a certain point the Assyrians could no longer hold Egypt – it just cost too many resources. So they gave the order to plunder the temples, as it was no longer necessary to respect the gods. Everything was looted, deliberately and systematically. This was the trauma. And that is why we rarely find any material in the temples that is more ancient than this period«.

Kim Ryholt returns the plate with the papyrus to the safe.

«The papyri are exceedingly fragmented, but we have made enormous progress. When I took over the project, very few texts had been studied and we did not even know it was a library. It is now clear that we are dealing with a collection of texts of absolutely fundamental importance«.