Get your gay on: Rainbow party at the Pride parade 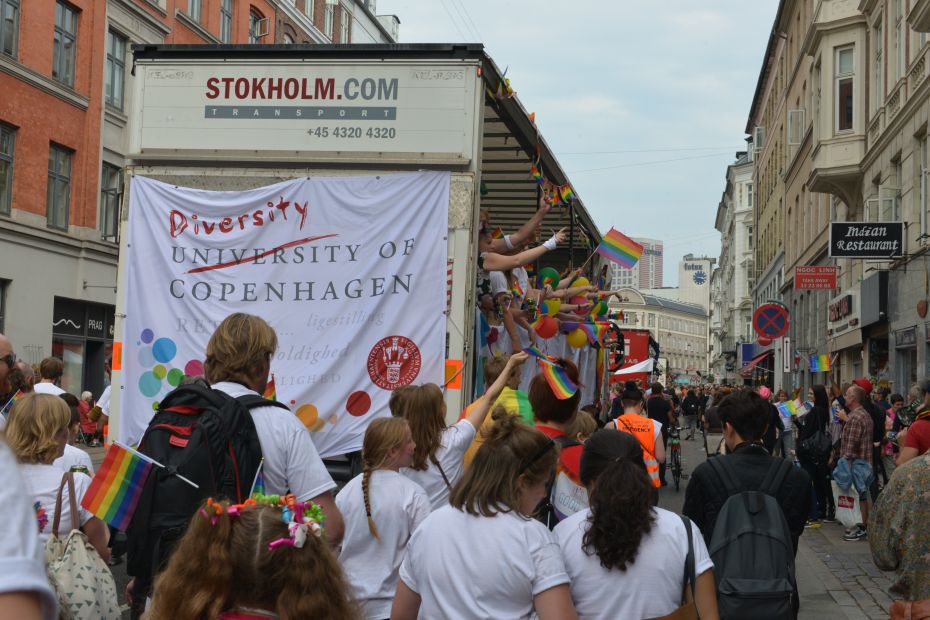 A jumble of waving rainbow flags, soap bubbles and raised beer glasses set the scene as the University of Copenhagen’s (UCPH) packed floats – with half an hour’s delay – trundled through the city for this year’s Copenhagen Pride.

Village People’s ’YMCA’ classic roars out of the speakers. Young and old, staff and students, after a few hours of waiting finally get to show the city that the University supports sexual diversity and tolerance.

Prior to this, about 400 UCPH’ers had spent the morning making themselves up with rainbow flags and purple glitter in front of Frederiksberg City Hall. The Studenterhuset café had organized sandwiches, alcohol and white t -shirts with the slogan ‘Diversity of Copenhagen’.

Glitter, a skimpy dress and a sexy dance. And the ability to sing Song Contest hits and club classics. Then you are truly at home on the UCPH Pride bus

It is the third year in a row that UCPH and the Studenterhuset sends a float to Copenhagen Pride.

“It is both to celebrate the city and to have a fun day. And it is also to send a signal of openness and tolerance,” says Jacob Ørum, head of Studenterhuset before departure.

The interest in taking part is overwhelming. In the weeks up to the parade, people queued up to the sign up on the site, and organizers had to tell participants that there unfortunately is no space for everyone to be on board. The message is accepted. There is nothing but love and good feelings in the air both on, and off, the float that day. Mixed with rosé wine , shots and beer of course.

You, I wanna take you to a gay bar

The lorry turns down Allégade, and a cheer erupts when the lorry discovers the attending crowd that has taken to the streets to celebrate the parade participants.

Three exchange students look curiously at the many people on the truck. They are from Mexico , Germany and Italy, and have met each other just an hour beforehand at the Studenterhuset catering in front of the truck.

“Copenhagen, in my world, is a symbol of openness, and I want to celebrate it,” said a Mexican pharma student overwhelmed by the Pride Festival turnout.

Behind him, a couple of muscular men dancing sexily with each other, while a green bottle is lifted into the air: “You! / I wanna take you to a gay bar,” sung in chorus with Electric Six’s LGBT song, before Miley Cyrus takes over with the hit “Party in the USA”.

“Cheers, goddammit” everyone shouts on the truck, while the party and the love ramps up on the way to Vesterbro.

The images from the rest of the truck ride are below :

The dance above pretty much describes the mood among the more daring parts of the float.

One of the day’s greatest outbreaks of joy as the UCPH float passes a bunch of older people who yell and cheer on the Pride participants from their terrace.

A contestant for the outfit of the day

Prorector for Education Lykke Friis (centre of picture) partying at this year’s Pride-festival.

An elderly women gathers up a rainbow flag and waves it with zeal. Tears well up from the corners of several Pride guests’ eyes.

There is not enough space, so not all guests are allowed to get on to the float. They follow the float anyway.