God shuffles the cards for CERN 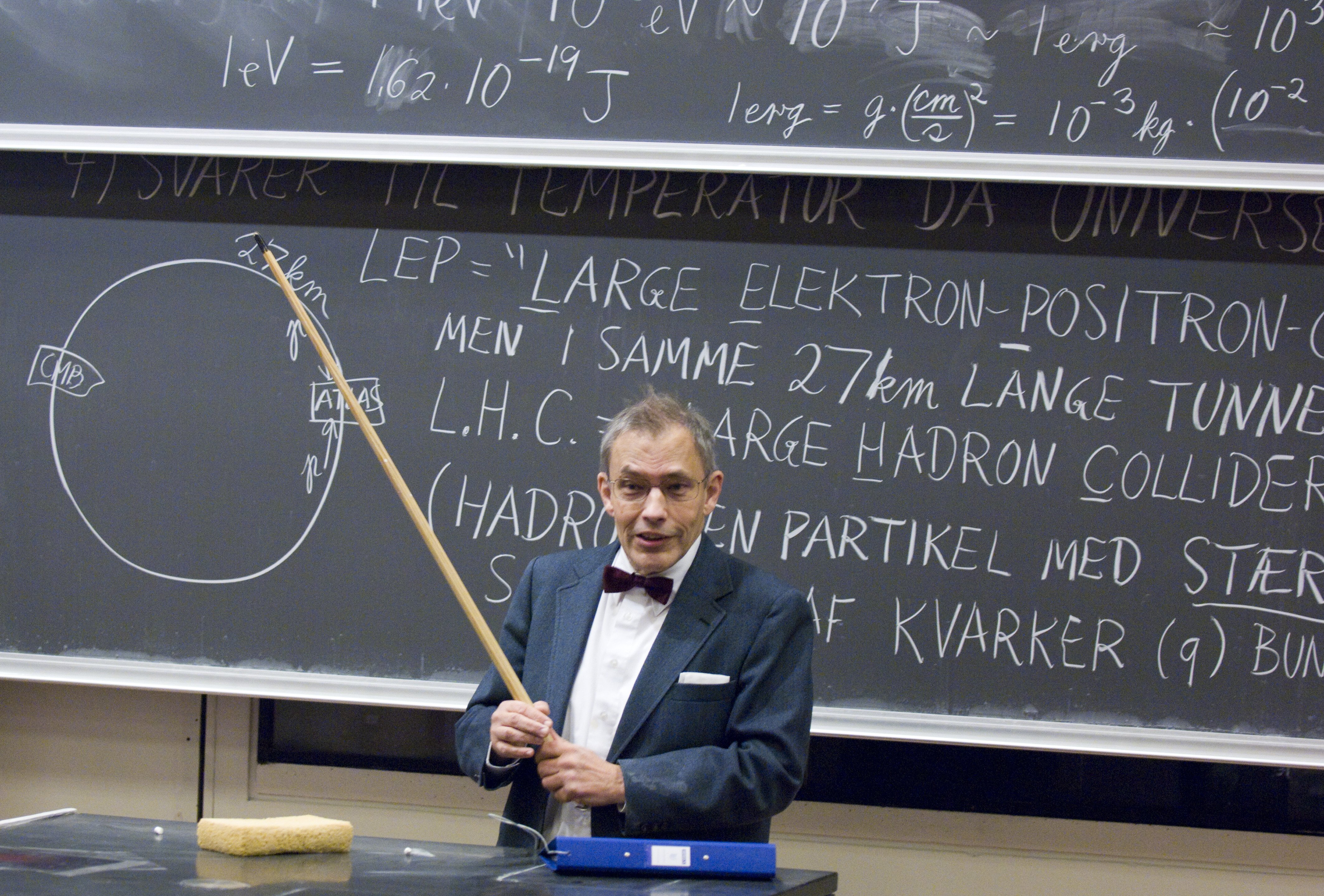 The Almighty is wrecking the multi-billion euro CERN-experiment, and the proof of it is in a pack of playing cards. Is this serious physics? The University Post went to find out

»Go in to the reception at Niels Bohr, and wait for them to tell you that I am always late.«

This was the e-mail instruction from Holger Bech Nielsen, Professor of Physics at the Niels Bohr Institute in Copenhagen, a Danish household name and the man behind the so-called ‘God’s will’ formula. A formula that introduces predetermination into the world of high energy physics and blames the Almighty for the misfortunes of the costly and ill-fated Large Hadron Collider (LHC) of CERN in Switzerland.

As we go to press, the LHC has yet to find the elusive Higgs Boson particle.

He was not wrong about the secretaries. They exchange looks and start ringing frantically to Holger Bech Nielsen’s office. They needn’t have worried.

Some time later, Holger Bech Nielsen meanders in to the reception, keen to get started. He is more than happy to provide his complex scientific and mathematical explanations in English; a booming, exuberant English, with the accent of an eccentric scientist, who seems to spend most of his time dreaming of equations.

Behind us, a blackboard is covered in signs and words, including the ‘God’s will’ equation, I learn later.

»The ‘God’s Will’ theory is an ambitious one,« he starts off, with drop-dead understatement. He is talking about the theory whereby God, or at least some force determining the fate of the Universe, is preventing the production of the Higgs Boson particle, by wreaking havoc at CERN’s Large Hadron Collider experiment.

God, it seems, has a reason to prefer a universe where the Higgs doesn’t exist.

»What you usually have is mechanics and how things develop as time goes on – Newton’s laws. But you have to know the starting point to know what happens later on. You need to know the initial conditions,« explains Holger Bech Nielsen.

Formula to predict the future

Instead of simply working out the possible solutions for what could happen based on initial conditions, the ‘God’s will theory’ attempts to give an equation for which solution actually gets realized. Holger Bech Nielsen explains that the unique concept in the ‘God’s will theory’ is a mathematical function called ‘the imaginary part of the action’.

»The most important thing about the imaginary part of action is that it depends on all times and it is actually an integral over time. That means you take a little contribution from all seconds through the history of the universe, past, present and future. Then, in principle, we have a formula by which we can calculate what happens, a theory that determines the solution to be chosen,« he explains.

»I don’t really expect people who are not physicists to understand what an ‘action’ is. But if this expression depends on what goes on tomorrow or at all times, then of course the solution that will be selected will have some sort of prearrangement in it,« he says apologetically.

God is back, but he is not good

With this equation, Holger Bech Nielsen reintroduces the idea of predetermination.

»You see, I think Darwin killed off this idea. Before Darwin, nature was prearranged. But with clever theory, Darwin managed to explain it away. This was a shock to the Church, because in the Bible, it is a commonplace notion that the future can be pre-arranged.«

»Now, with this formula, God would be back and the opponents of Darwin might be happy. But I’m not sure they would be so happy after all, because having such a formula would be even worse than Darwin, from a religious point of view. A really good God minimizes the amount of suffering or something like that. But here he is minimizing the imaginary part of action instead!«

Does this mean that the LHC will not succeed?

»You could think of it using this analogy: The God’s will formula expresses that there is a kind of leader of the universe, a God in quotation marks. He is like the director of a company, trying to govern it so as to minimize the company losses. He tries to cut expenses, and this is the same as the imaginary part of the action.«

»If something is the cause of a huge expense, adding to deficits, he would not want it. The speculation is that when you produce the Higgs Particle it would give such enormous contributions to ‘imaginary part of the action,’ that it should be avoided. ‘God’ hates the Higgs. So if humans make big machines that produce a lot of Higgs’ then it is profitable for him to avoid the deficits, and kill the machine.«

So how do you test all this?

»We take a pack of cards, or have a computer pick out a series of random numbers, but lets just say we use cards. The Director General picks out the cards. If he picks them in a very seldom combination, then we restrict the LHC to only run at a low energy, like the Tevatron (Another particle buster machine in Texas, ed.). If our theory is correct, he will pick exactly these cards. We have a contract beforehand of course. If he picks our combination, our theory is proven.«

Better cards than an explosion

How would the investors (the taxpayers, ed.) feel about stopping the project before it even starts, based on a card game?

»They might not like it. But in one way, everyone wins. Either nothing happens in the card game, as everyone expects. Then the whole thing is just a media stunt, and our theory is in bad shape. But if he pulls the right combination, then it shows that our theory is right, which is an even greater result. It would be a success«.

»If you don’t do these card games, then God, if the theory is correct, will stop the machine by some other means. But this is not as convincing as the card game. If you stop it with some explosion or some other way, it can always be explained away.«

Why does God hate the Higgs?

»I think the argument is that if he really loved it so much then it would probably mean that there would be Higgs all over already because why should he make empty space if he loved Higgs? It is more likely that he hates the Higgs. Therefore if you make machines producing a lot of Higgs, he should prevent it.«

If LHC does work as expected, what does that mean for the God’s will formula?

»It’s bad for the theory. It is not logically killed, but I think it is psychologically,« he says.

»This version of backwards causation where we stress the bad luck of machines producing the Higgs was put forward and published before the last year of LHC bad luck where there was a burn up of two superconductors. The helium boiled and it caused an explosion, which moved the magnets. They had to close down and repair. Now they are starting again. If you believe this theory it is just a matter of time before something bad happens again«.

Do you believe your own theory?

»One shouldn’t exaggerate belief,« he chuckles.

»But it is a sign that these bad accidents have happened. This accident and the other machine in Texas being shut down, it is not normal!« he exclaims.