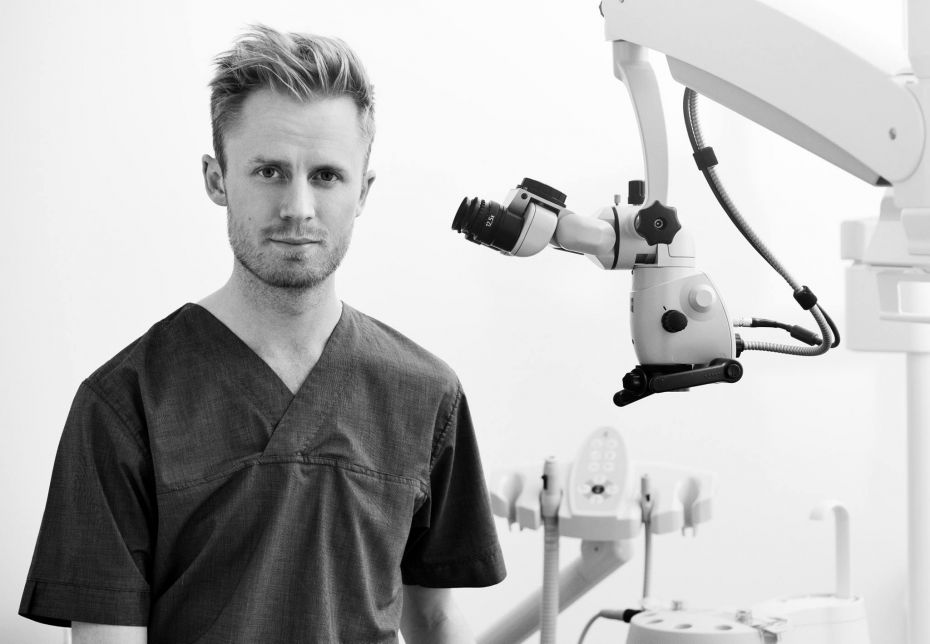 Sune Demant has helped out in the kitchen since his childhood on his parents' farm in the Danish region of Fyn. "When you are a child, you are not set to chop onions as the first thing. You get to bake the buns and make the cupcakes. This was the way I got started," says the dentist, who on Wednesday was named the winner of the Danish version of the Great Bake Off.
image: courtesy of Sune Demant

It was in Paris while an exchange student that Sune Demant got his passion for root canal treatment, and for macarons. The macarons were the cakes he baked and won with at the final of the Danish version of the Great Bake Off

The last nine Wednesdays Sune Demant has appeared as an amateur baker in the Danish version of the television programme the Great Bake Off. And with a serving of Mexican macarons and a wedding cake covered with glacé and blue beetles he succeeded Wednesday, 9 November in landing a title as winner of the baking contest.

The victory came as a surprise to most of Sune Demant’s colleagues, who were not aware of his baking talent. Although he loves to bake, he is rarely the one that arrives with cake to share with colleagues.

“I always have a very tight schedule, so that kind of stuff would require some planning,” says Sune Demant, who is also a PhD student at the School of Dentistry, University of Copenhagen (UCPH).

Sune Demant’s PhD project is about the importance of inflammation processes in stem cell’s ability to form dental tissues. He has looked at what happens in teeth inflammation, and has found that the inflammation can lead to the formation of new tissue – such as cartilage.

“The dentistry profession has a long tradition and is mechanistic, and we freely amputate with little fuss. We already know that teeth have the ability to form a new tooth if there is a very large hole. But we had not known how much regenerative potential that is actually present in a tooth,” says Sune Demant.

The subject of his PhD project is a niche within Sune Demant’s main field of interest, which is root canal treatment. His interest began when he was on an Erasmus exchange in Paris in 2010.

“It was here that my professional career really started. I started to become interested in root canals, as there is a strong tradition for this in France. In this way, my stay abroad was a watershed moment for me, and probably also in connection to cake baking. For me it all started with macarons. They were super modern when I was in Paris. They had really had a renaissance, and they cost an enormous amount of money – perhaps twenty kroner a piece or something. So I thought, you must be able to bake those yourself.”

It would prove to be the macarons – with lime-salt-ganache and mezal maize cream inspired by Mexican cuisine – which led Sune Demant to victory in the baking contest.

Hands in the dough

If you ask Sune Demant about the relationship between the dental profession and the cake baking, he answer’s promptly with a Danish figure of speech:

“It’s about having your hands in the dough”.

“I have always used my hands a lot and I would like to have been a goldsmith. Then I got to secondary school, and I was happy with biology, and it was hard to find an apprenticeship as a goldsmith, so I began to study medicine in Odense instead,” he said.

“We are in the process of writing our thesis immediately. It is a kind of academic handicraft “- Sune Demant on his subject.

He found out, however, that medical school was not for him, and he switched to dentistry in Copenhagen.

“I fell for it. Doctors only really start with surgery when they finish studying. We dentists are in the process of writing our thesis immediately. It is a kind of academic handicraft.”

This craft he has been practicing himself in a dental clinic in the Copenhagen suburb of Herlev, where he continues to work while he does his PhD.

“It’s a bit embarrassing, because I had to postpone my PhD. I should have really completed it in early 2016. But then this Great Bake Off contest got in the way.”