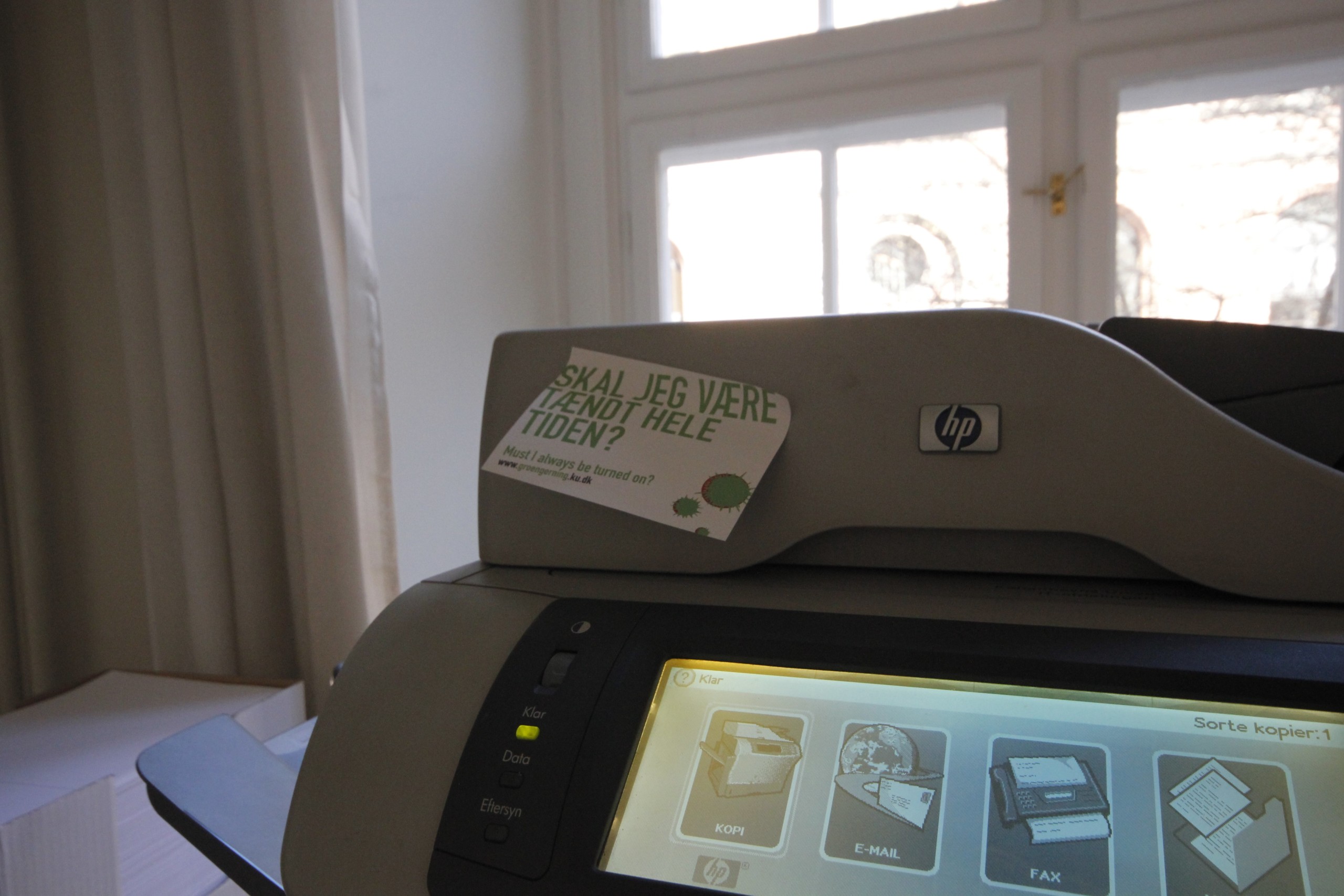 Sticky notes on campus printers is one of the ways the green action plan is trying to make people think about their energy usage
image: Polina Chebotareva

Universities across the planet have been highlighting the dangers of climate change, so it only seems fitting that they take responsibility for their own emissions. To that end the International Alliance of Research Universities (IARU), which the University of Copenhagen (UCPH) is part of, has highlighted programmes and initiatives from across their membership. A recent report from the University of Oslo, also looks at different universities green commitment.

UCPH has invested in several action plans, including reducing energy use by 20 per cent, developing the ‘green lighthouse’ which is the worlds first CO2 neutral research building and funding the ‘green relay’, a community initiative seeking ideas on developing a ‘sustainable campus’

The university is aiming for an inclusive project saying »that everyone should show responsibility«, assistant at project Green Campus Anders Gerhard Jørgensen explains, »even if it is not you who has used the microscope or table lamp, turn it off«.

Going green in the USA, Australia and Japan

According to IARU, Berkeley, California has shown a very different focus, pushing sustainable eating by pledging to serve only organic food and ethically caught fish in its canteens. Another particularly American initiative has been to encourage more car sharing for staff and students, not a problem in Copenhagen where the majority of both arrive by bike.

The Australian national university uniquely focuses upon ‘HotRot organic recycling’, known as composting to most people. This attempts to eliminate the environmental and economic costs of the 230 tonnes of food waste the university produces per a year. They hope to turn waste into useful soil in the Australian desert. Another Aussie centric initiative is increasing use of artificial turf to save drinkable water in the drought ridden country, not a problem in Denmark just yet.

Unsurprisingly the University of Tokyo, Japan has a more technology focused implementation, planning to install ‘smart’ power meters that let users see how much energy they are using as well as using modern large-scale heat source systems (costing approx 500 million yen) to reduce emissions by 6 per cent.

Can win tickets to Roskilde festival

The IARU also highlights the universities overall commitments to carbon reduction, with UCPH reaching for a strong 20 percent cut on 2006 levels by 2013 compared to Yale’s 43 percent below 2005 by 2020. The universities have their own targets, so they are not directly comparable but you can see a comparison of their goals here.

In a separate report worked out for the University of Oslo, that includes a comparison of 20 top universities’ ‘environmental commitment’, Copenhagen scores 9th out of the sample of 20. See the report here.

You can read more about UCPH’s environmental activities here at the green campus project and here at the green action project(requires log-on’s). Both of which highlight the steps taken to lower carbon emissions and meet the IARU commitments.

Right now you can participate in an online quiz to win tickets to the Roskilde Festival, just by answering some questions about sustainable actions here (requires log-on). Prizes are drawn every Friday until the end of march.