Guns and laptops in the murder capital 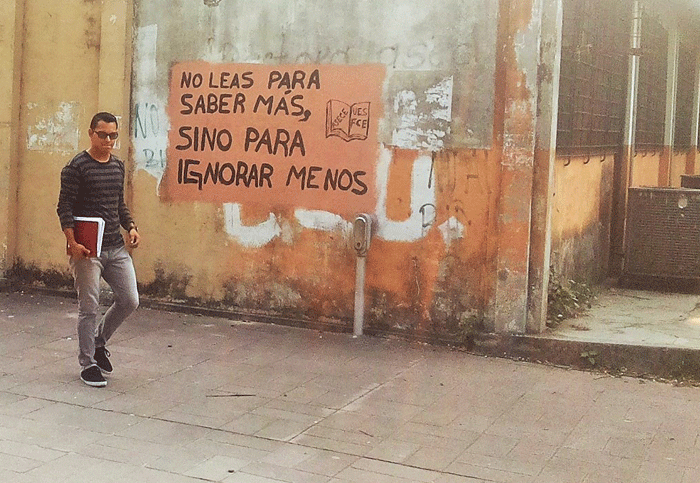 El Salvador is the most violent country on this planet. And yet students get up and go to university every day. The University Post spoke to one of them

When you get up and go to university in El Salvador, you wonder if you will actually come back home alive.

This is according to Daniel Funes, a 25-year-old Salvadoran student of International Marketing in Universidad Nacional de El Salvador, the country’s biggest university, who talked to the University Post.

“To study does not mean you are safe from crime. One way or another, you might end up being a victim of it,” he says.

In 2015, El Salvador was named the most violent in the world, with 6,657 murders registered last year, in a country with 6.5 million citizens. And according to numbers given by the National Police to the BBC, 1,380 people were murdered already in January and February, a figure that doubles last years’ monthly statistics.

Daniel who is both a student and a member of the national fencing team has been robbed, threatened, and has lost friends to gang violence, and he talks frankly and openly about what this violence means for his daily life at university in the El Salvadorean capital San Salvador.

He has to take the bus every day from his house in the outskirts of San Salvador to his University or to fencing practice.

“When we see that a guy gets on the bus and shows us the gun, we automatically take our phones and money out without saying a word.”

The bus ride, he says, is a “constant rollercoaster” where anything can happen. He has been mugged several times, having rusty knives pointed at him. A man once sat next to him and pointed his gun against his body.

“I was dressed a little bit formal since I was going to have this important presentation in class. I got on the bus that takes me to my university with my bag and my laptop, where I had my slides prepared. While I’m in the bus, this guy gets on and sits next to me. And perhaps because I was all dressed up, he thought I had some valuable things in my bag.”

“He starts telling me to give him all my money and cellphone. I thought it was just another little thief and told him ‘No’. I was thinking in my laptop and the presentation I had saved there. ‘Look’, he said, ‘I don’t want to hurt you. But if you don’t give what I ask, you know what’s going to happen here’. After saying this, he pulls out his gun and presses it to my stomach”.

After giving the robber his cellphone and money, Daniel recalls how he was lucky to keep his laptop.

“He sees my backpack and points at it with the gun. ‘What do you have there?’, he asks. ‘Do you have a laptop?’ ‘No’, I lied. ‘Well, then open it’, he said. I felt my heart beating fast and my hands getting cold. I nervously opened it. He sees inside and sees all my books. And … can you believe it! He does not see the laptop! It had a laptop cover, so he thought it was something else”.

One of his friends was not so lucky this day.

His friend did not want to give the robber his belongings. He was shot while trying to run to the exit door of the bus.

“When it’s a robbery with a gun, people panic”, Daniel says.

“Robbers are also nervous and we know it. So when we see that a guy gets on the bus and shows us the gun, we automatically take our phones and money out without saying a word. But every day there is someone who ‘plays the brave’ and gets shot for that. No one wants to be that person.”

Going to the police is not an option for students, Daniel explains. The police are in their own way a victim of the violence, if not actively involved. In the country, two big gangs, Mara Salvatrucha MS-13, and Barrio 18, are in constant confrontation against each other to gain power over territories, neighborhoods and cities.

“My local baker was being extorted by one of the two big gangs. He was naive and went to the police to make a formal complaint. A couple of days later, some guys almost killed him with heavy beating because someone in the police told the gangs about his complaints,” he says.

Police officers in El Salvador make roughly USD 400 a month, a little more than DKK 2,500 each month. Confrontations between the police and the gangs are daily news and, according to Daniel, risking your life for so little money is not worth it.

“It’s hard. It’s hard when you can’t trust people who are supposed to protect you”, he says.

Bloody shirt all that was left

Water trucks, streets sellers and other commercial trucks have to pay to get in and out of neighborhoods. Daniel is fortunate he does not have to ‘pay rent’, as they call the payment of the extortion made by one of the local gangs. However, in other areas, young students must pay daily or monthly to the gangs to be able to go to study and to get back into their own homes.

When asked about his friends, Daniel’s voice turns grim and speaks in a lower tone. Three of his friends joined the gangs, and are now dead.

“The first one disappeared for a week. His family didn’t hear from him at all and his father spent all the time looking for him. Some days later, someone spotted a body down the ravine near our neighborhood. His dad knew it was him because of his clothes, but they left him unrecognizable. He was 20 years old”, he recalls.

“The other one was 15 years old. He was a very quiet and a very cool guy. I never imagined he would choose to join those groups. He lived in one of the most dangerous neighborhoods, totally owned by one of the gangs. One day, he told us that he had joined one of the gangs. His mom, trying to get him away from that, took him to live to another city, which is ruled by the other gang. They found his legs near the church of his old neighborhood and his bloody shirt in front of his school. They never found his upper body.”

“The last one made the mistake of not telling the gang that his father was a police man. He disappeared and his bloody shirt was thrown also in front of his school. No one has heard of him again”.

Should I join the ‘dark side’?

He stays quiet for some seconds, before he starts speaking again: “It’s a weird feeling when this happens to someone that you have known, talked to and played with”.

“You see so many good people suffering and being victims of all this, so you start thinking that joining the ‘dark’ side will actually save you”

Daniel, like hundreds of other students, has had to decide whether or not to join one of the local gangs:

“Honestly, I have thought about it. But I have seen what it does and how hard it can be. I decided to dedicate to skateboarding and fencing. It has kept my mind busy.”

For formal jobs, the minimum monthly wage in El Salvador is USD 118.20 (DKK 773) in rural areas and USD 246.60 (DKK 1,704) in the industry sector, which, according to Daniel, is not enough for Salvadorans to live a healthy life. This has some influence on young people’s choices to join one of the local gangs, or to live a life full of illegalities.

“You see so many good people suffering and being victims of all this, so you start thinking that joining the ‘dark’ side will actually save you. They have money, easy money. We, the other side, work so hard just to make enough money to survive the week. Then one of those guys comes and take that little money away. So you start thinking about how easy your life can become”.

Daniel’s future seem uncertain, but there is one thing that he is sure of.

“I don’t want to be a father. Not because I wouldn’t like to have children. The thing is, if life has been so tough for me, when things weren’t that bad, I can’t imagine how hard my kid’s life is going to be. I can’t imagine bringing children to this world, I can’t do that to them.”

He has managed to stay at the margin of violence and conflict. He gives credit to his family for teaching him to respect others and to work hard to succeed in life.

Daniel says he is one of the lucky ones in the country, having a home and a close family that has taken care of him and his sister since he was born. Sports have also changed his life for good. He is now member of the Fencing National Team and has represented his country in various tournaments across the continent.

“We care only about surviving the day. Bringing food back home. I feel we need to change and do something for our country. We should start by being good with each other. Stop fighting against each other for small things and unite.”

As for building a life in this country?
Daniel hesitates. “It depends. Like in any other place, it depends if you are lucky to be born having it all, or if you have to struggle to have something.”