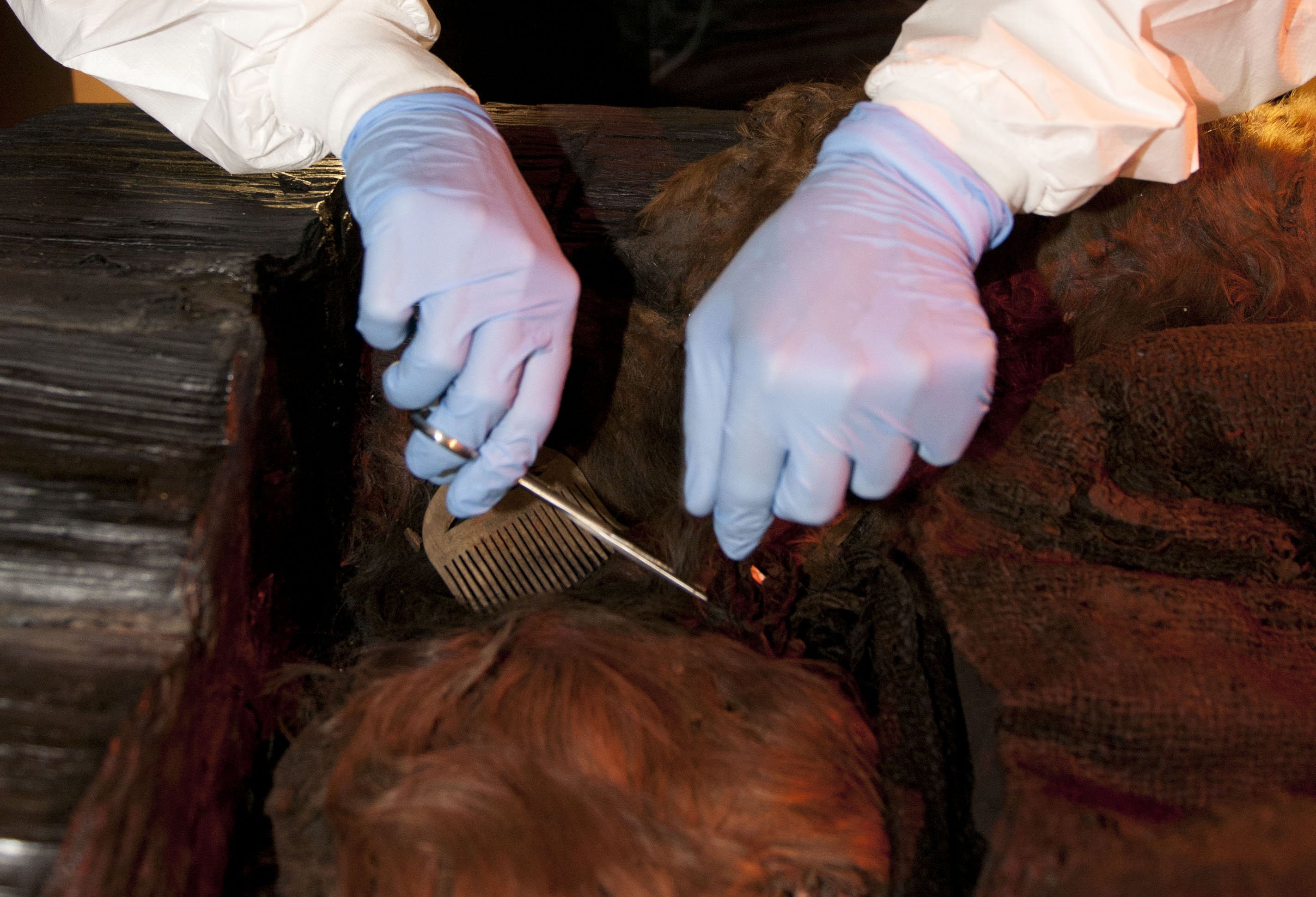 Enough hair for a sample. Her genes are to be reconstructed
image: Uffe Wilken, Grundforskningscenter for Geogenetik

The famous Bronze Age girl found near the town of Egtved is to be reconstructed genetically.

Morten Allentoft of the University of Copenhagen has taken a lock of the girl’s hair for his research.

»If we are fortunate enough to isolate DNA of sufficient quality, the hair samples can tell us something about where the Egtved girl came from, and how she actually looked,« says Morten Allentoft about the project.

Check out the photo gallery of the sampling of her hair here.

Will compare with other sets of teeth

»In this way we can find out whether her ancestors have mixed with other previous human species. For example whether or not there is more of a Neanderthal in her, than in the humans of the present time,« says Morten Allentoft.

The Egtved girl was found in a burial mound near Egtved in the south of Jutland in 1921. She was about 16 to 18 years old, when she was buried about 3,400 years ago. (We actually know the precise year of her burial was the summer of 1370 BC from tree ring dating, dendrochronology).

The tests will show how much migration took place around the north of Europe.

Archaeologist and professor Kristian Kristiansen of the University of Gotherburg, Sweden is head of the project, and says to the University Post that the tests on Bronze Age teeth remains, that will supplement the hair test, are already promising.

»I think it will show that Europe is far more complex in a genetic sense than we previously have thought«, he says.

To the University Post he explains that if the reconstruction is successful, the Egtved girl’s genome can be reconstructed, letting him know »how many of us northern Europeans are related to her.«

The project is of the same general type that recently successfully reconstructed an ancient Greenlander’s genome from a lock of hair.

The Egtved girl has been the object of almost cult-like veneration since she was uncovered in 1921, and since put on display at the National Museum in Copenhagen. While her clothing is almost intact, only the girl’s hair, brain, teeth, nails and little skin remain preserved.

She wore a bodice and a short string skirt, had bronze bracelets and a belt with a large disc decorated with spirals and a spike. At her feet were the cremated remains of a child age 5–6.

The Egtved girl has no cranium, and this may hinder a complete reconstruction of what she looked like. but according to Kristian Kristiansen, »we will at the very least be able to tell whether she was blond and blue-eyed«.