Have a good book? Donate it to an asylum seeker 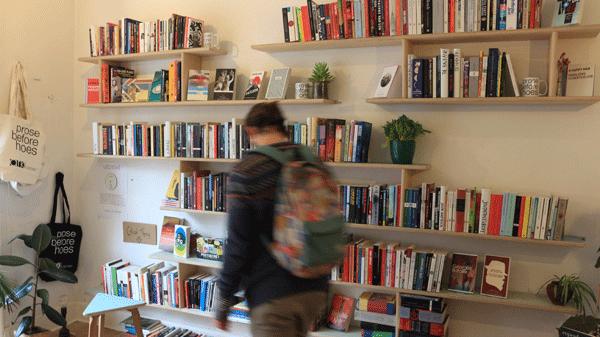 In project 'Bookless', student volunteers are collecting good reads for the refugees

It’s the trend for students to help refugees: Now a student-run bookshop in Copenhagen is collecting books for them.

Ark Books opened in April 2014, as a purely voluntary-based, student-run book store in Nørrebro as reported on University Post here. Since then they have not only offered a unique selection of English language books, and held various literary and music events, but also published six copies of their own, hand-made book, First Ark Edition with Paul Auster’s and Siri Hustvedt’s original texts.

The initiative for ‘Bookless’ project came about after one of these original books got stolen from the shop.

”We can’t really think about why would anybody steal the book. But then we sort of joked that it has to be someone who didn’t have any books,” says Rasmus Heegaard, a volunteer at Ark Books, ”and Minerva (from the shop) thought that maybe there’s more than one person out there, who can’t hold a book. So she said, let’s collect books for those that are in need.”

Check out a video about the ‘Bookless’ project on the facebook page here.

Distributing books among the less fortunate

As a lucky coincidence, the Kongelunden asylum centre in Dragør just started up its library – Bibliotek Kongelunden – in the first week of March, and Tore Qvist, a volunteer who worked on the library’s book supply, was excited about the idea of ‘Bookless’. Bibliotek Kongelunden had a lack of resources to organize such collection, while Ark Books needed somebody who can distribute the books among the less fortunate, so it was a perfect fit.

Bibliotek Kongelunden is supplied with books from numerous public libraries from all over Denmark, but the majority of them are spare books, or those that have not been checked out for a long time. The mission of ‘Bookless’, on the contrary, is to bring beloved, high-quality books to those who need them the most.

”It has to be a book that you wouldn’t mind to give to a friend,” says Rasmus.

Any language will do

Among Kongelunden’s residences books in relatively any language can find their new readers, from Arabic and Urdu to English, French, Spanish, and of course Danish.

‘Bookless’ expects donations until 30 April 2016, however, based on its success they would like to leave the project open-ended.

Check out a video about ‘Bookless’ on Ark Books’ Facebook page.