He spoke, we listened: Expert offered tips for public speaking 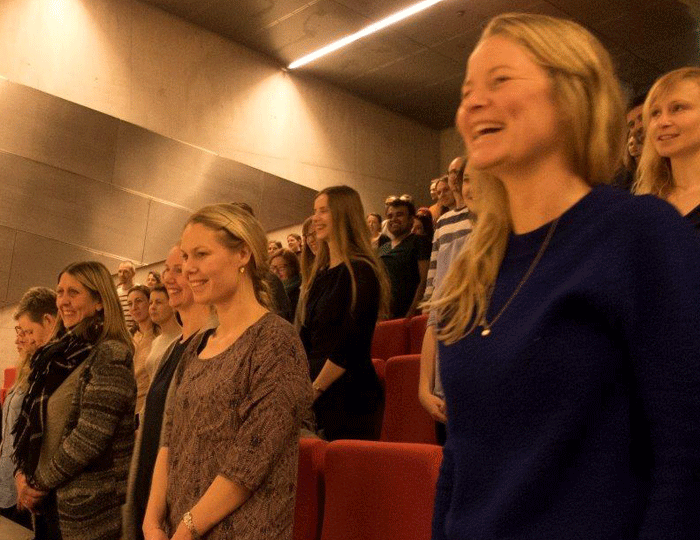 Attendees at the Lundbeck auditorium, University of Copenhagen, were put through the motions by the speaker
image: Anne Schultz Vognsen

Top rated speaker on sound, voice and communication got everyone's attention at the University of Copenhagen

The faint sound of chatter becomes an excited flurry of conversation.

A few footsteps soon became deafening with the anticipation tangibly rising, as the graduate and PhD students trickled in. In fact, even a few grey-haired professors could be seen filling the gaps in the auditorium. All the while, the speaker had taken his place in the front row, silently waiting until the clock turned 3 pm.

We are at the Lundbeck Auditorium, Copenhagen BioCentre, University of Copenhagen, and the speaker for the day is Julian Treasure on ‘how to speak so that people want to listen’, invited by MoMeD, the Danish Research Programme on Molecular Mechanisms of Disease.

The speaker is the message

Julian Treasure is a five-time speaker at the renowned TED Talks (in fact, his most popular talk ranks among the top 20 most popular on the site) and the founder of a consultancy firm called ‘The Sound Agency’. He works with brands – asking them how the brand sounds – and he is particularly intrigued by “getting the sound right in public spaces”, referencing a newly-completed project to improve the sound at the Mall of Scandinavia, Stockholm.

Julian Treasure: We are hardly trained to use our voice properly

His ability to captivate the audience quickly became apparent. As he provided an overview regarding the significance of sound, his deep voice, perfect posture and excellent delivery was in itself a pleasurable auditory experience, which, of course, was the point of it all.

In introducing the importance of sound, he noted that “it’s amazing that this instrument (our voice) is something that we are expected to know how to play”. In particular, he touched on the marked “mismatch in training” in regards to our voices.

We use it in almost every social context imaginable, but we are hardly trained to use it properly. And in public spaces, “there is so much noise around us that we get into the habit of suppressing sound,” he says,

Speaking is equivalent to giving a gift, as presentations are fundamentally all about the listener and not the speaker.

The first ones are on using your vocal toolbox: As he puts it, “we associate depth with power and significance”.
• Stance: Use a neutral stance that isn’t distracting to the audience, but remains natural
• Breathing: “The antidote to nerves”; breathe before a speech to settle yourself and reduce anxiety
• Register: Try and speak from your stomach and not from your nose/throat; it provides a clearer and deeper sound
• Prosody: Speak rhythmically and fluidly, it’s “route one for emotion and meaning”
• Variation: Vary your pace and tone to stimulate the listeners

The second pieces of advice are practical tips:
• Practice speaking
• Set up a theatre/speaking area at home that mimics the venue
• Get a coach who can evaluate you objectively
• Plan your talk: Order your ideas, use aids, create content-chunks
• Warm-up your lips, tongue and chest to improve your sound on stage
• Power poses: Poses that make you look larger can be used when you’re lacking confidence, as they release testosterone and thereby increase confidence
• Gestures: Avoid a placator gesture (having your hand open) and use gestures to emphasise points

Curate your own environment

At the end of the talk, he encouraged us to “curate our own environment” – building public spaces, venues, and even ourselves as individuals around the pillars of good sound.