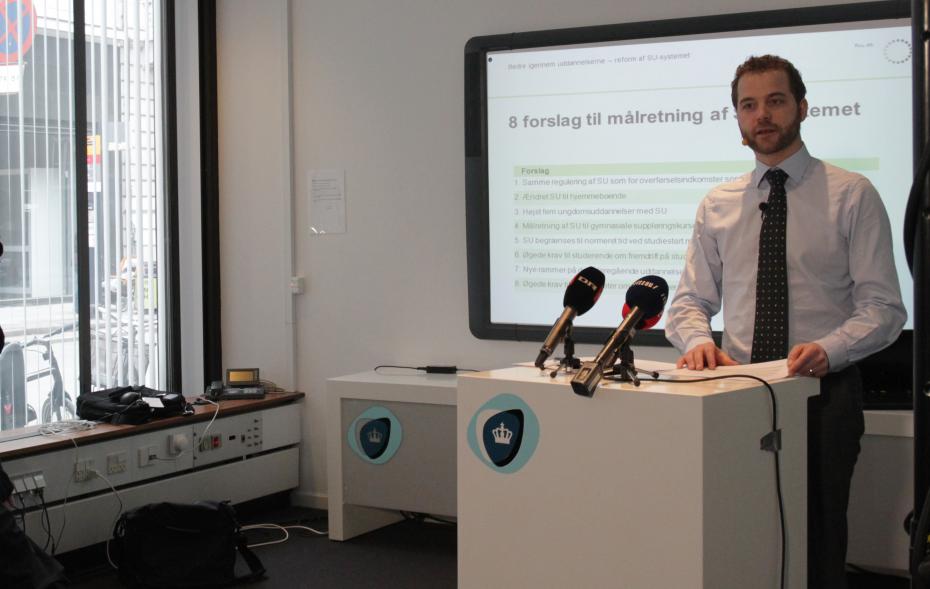 The government wants to reform the generous Danish SU student grant system. Now they have released the details. A majority is in place, so this is close to what it is going to be

Most present university students will remain relatively untouched. Hardest hit will be the below 20’s still at home. They will suffer a large cut to their student grants.

The reform to the SU system has wide support in the parliament, but is not popular among Danish students. University of Copenhagen students will get the chance to meet the Minister today, at what promises to be an acrimonious exchange. The minister was heckled by banners and cat calls at another event at Aarhus University.

Media: Cuts could cause problems for govt.

»Our young people will still have the opportunity of good, financial backing irrespective of how much money their parents earn, and that’s the way it should be,« she said.

However, the about turn by goverment that was elected on a no-change platform, was seized on as yet another breach of a campaign promises by commentators. Student associations have warned of a major demonstration against the cuts in Copenhagen on 28 February.

Danish student grants are some of the most generous in the world, and have been criticised by business. . Other policy consultants have also called for a reform of the grants, which are said to reward laziness, and penalise working taxpayers.

So here is the plan as presented by government, which is designed to cut DKK 2bn from the taxpayers bill.

1) The sixth year of SU student grants, often been framed as the ‘slacking off’ or ‘fooling around’ year, will be removed for those who wait more than two years after high school before they begin university.

Today, the extra year of student grants ensures that students can finish their studies without ending in a debt trap, argue students.

2) All students will automatically be enrolled for their exams, and if they dont take any exams for six months, they will lose their right to student grants.

3) If a student wants or needs to postpone an exam, the student has to apply for and be granted dispensation. If dispensation is not given, not going to the exam will count as skipping a mandatory exam.

4) In general, the possibility of postponing exams will be reduced and it will be harder to get dispensation.

5) Students under 20 years of age and students between 20 and 23 years who still live at home will suffer a substantial reduction in the amount of student grants that they now receive. Today, they receive DKK 2860 which will be cut to DKK 1274.

6) The current cap on student grants will be lowered and respond to the same rate as the rates of pension and unemployment support.

7) The faculties have to improve their administrative framework. The universities have often been accused of Kafka’esque rules, standing in the way of the students to transfer coursework and merits, taking re-examination when failing a test, or changing their field of study. All decreasing the pace of the students.