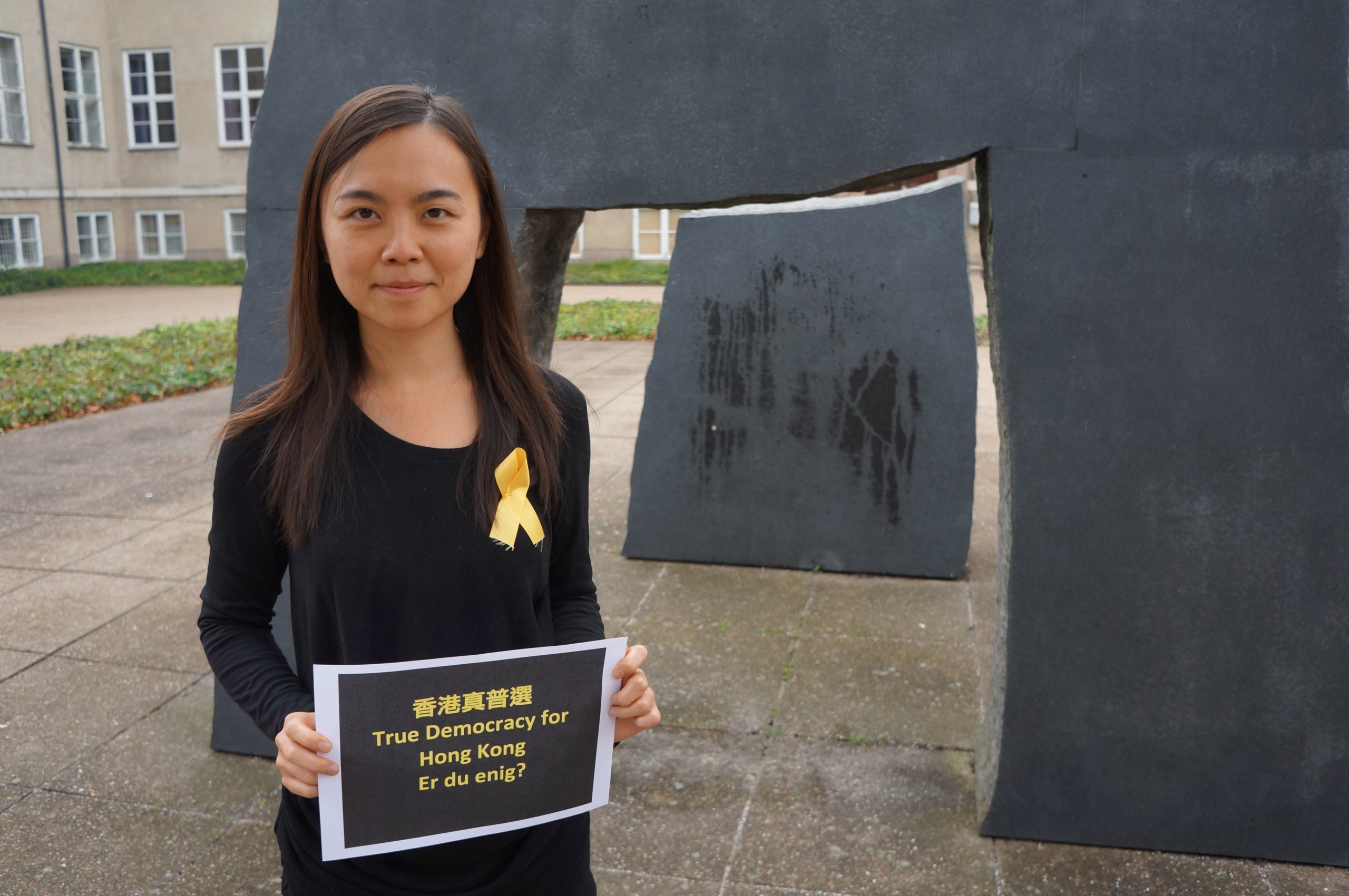 At critical times like this, the people who stay quiet are interpreted by the politicians as being their supporters. Hong Kongese PhD student at the University of Copenhagen calls on the media for more coverage, and for politicians to take a stance

Allison Man, originally from Hong Kong, is a PhD student at the Dark Cosmology Centre, the University of Copenhagen (UCPH). The University Post asked her six questions about the protests going on in her home city.

So what is going on in Hong Kong?
“There is a massive protest involving tens of thousands of Hong Kong people demanding a genuine democratic political system. In the 80’s the British and the Chinese sealed an agreement stating that Hong Kong should have its own political system, and our Chief Executive (governor) should be elected democratically. ”

“However, it has been 17 years since we became part of China, and the electoral system is still somewhat opaque and indirect.”

“Around a month ago the Chinese government announced a ‘major reform’ for our next election, so that every Hong Konger can cast a vote, but the pool of candidates will be pre-approved by a pro-Beijing committee.”

“Many Hong Kong people are therefore disappointed and demand a truly democratic election. This is the first time Hong Kongers go on strike on this scale, and the first time that tear gas is used by the police to suppress demonstrations as far as I recall.”

Should be interpreted as testing ground

Would you like to be there?
“For sure I’d like to be in Hong Kong now. Since the movement began I have questioned myself regarding what I would be doing if I were there. I have never been in a demonstration in my life, because I do not want my involvement to be hijacked by political leaders who may have hidden agendas. But at critical times like this, the people who stay quiet are interpreted by pro-Beijing politicians as being their supporters and against the demonstrations for democracy. I think this is one of the reasons why so many Hong Kongers go on the streets.”

What are your fears, and what do you hope comes out of this?
“The biggest fear for Hong Kong people right now is that it will end like the [1989, ed.] Tiananmen Massacre.”

“Our hope is that the Chinese government will realize that its people will press for a more democratic system in the future, and Hong Kong can be its testing ground. I also think that regardless of the outcome of this movement, it has engaged Hong Kong people, in particular youth, in discussing and participating in politics. Civic participation is an important element in a democratic society.”

What can UCPH students do to support civil rights in Hong Kong? And should they do anything?
“Staying informed with the news is a good start. I think what happened in Tiananmen in 1989 is unlikely to be reenacted in Hong Kong precisely because the world is watching. International media coverage and support are therefore very important in determining the outcome of this movement. So if you think that current Danish news on the Hong Kong situation is too scarce you could ask your local media to give it more coverage, and maybe ask your politicians for their own stance. Also, young people in Hong Kong look up to the Scandinavian social system a lot, so exchanging thoughts and ideas would be good in the long run.”

What do you think of the media coverage? Are there any important things that you have heard from your friends, but not from the news?
“It is funny you asked. On the front page of today’s newspapers in Hong Kong, only one is reporting the demonstration. At least five other newspapers have printed the same words: ‘Hong Kong needs to be stable, Hong Kong should develop’.”

“We still have press freedom and there is no media censorship in Hong Kong. So it’s pretty scary that many of the media companies have in fact turned into homogeneous propaganda machines. The bosses of the few media companies that dare to speak in favor of democracy have received threats and even actual physical assaults, and are accused of working with the United States. Young people have realized that there’s much more to the truth than what is being reported on TV and newspapers in Hong Kong, so online independent media are an important way for us to keep updated with news now.”

Is this the start of a more democratic China, or of a more censored Hong Kong?
“Nobody can predict what is going to happen in Hong Kong in a few days time given the volatile situation, but we are definitely at an important moment of our history. Let’s hope for the best!”