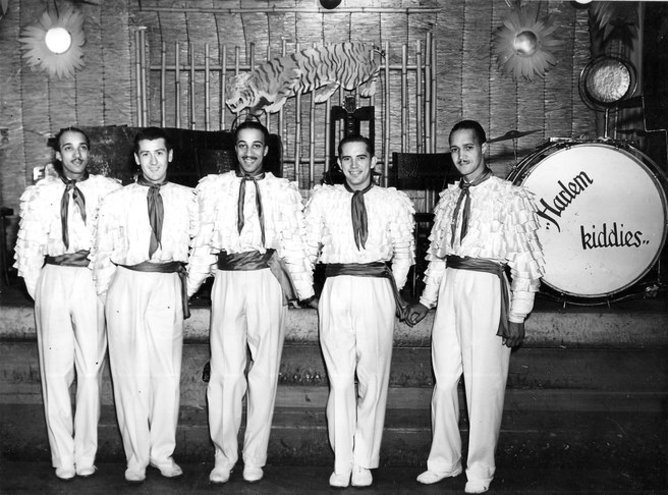 The popularity of interracial band "The Harlem Kiddies" during the Nazi occupation of Denmark highlights the place of jazz in the Danish resistance, writes Anne Dvinge in an article originally published in The Conversation.

It seems an impossibility: in Nazi-occupied Denmark in the 1940s, one of the hottest jazz orchestras around was the interracial Harlem Kiddies, with two white and three black band members – and a Jewish singer in front. The story of how the band came to be so popular is one that uncovers the great role that jazz and race played in the occupied territories during the Second World War.

Several factors contributed to the social and political atmosphere that enabled their success. In the occupied territories in the Second World War, Denmark was known as the Sahnefront – the cream front – due to the co-operative government and the relative leniency of the occupying forces.

There was a desire on both sides to make a pretence of life continuing as before and therefore a reluctance to clamp down on the entertainment industry. As long as you could still go out dancing, how bad could it be? And, contrary to popular belief, the Third Reich never issued an official and total ban on jazz. Rather, the policies on jazz were filled with ambivalence and inconsistencies.

On one hand, jazz was deemed a “degenerate music”. Despite difficulty in pinning down exactly what jazz was and in which ways it was offensive, Nazi ideology agreed it posed a threat to German high culture.

On the other hand, the difficulty in defining the dangerous elements of jazz also made it possible for it to slip through the net of regional and national decrees and prohibitions. The entertainment and recording industry in Germany was a real economic boon as well as a tool for propaganda. Seeing the effectiveness of popular music, Goebbels even authorised a German jazz propaganda band – Charlie and His Orchestra that aimed to stir up Allied sympathy.

In the occupied territories, jazz continued to exist and even thrive. In Norway, a ban on radio jazz transmissions meant an increase in live performances, both public and underground, and in Paris the popularity of Romani jazz guitarist, Django Reinhardt, allowed him to avoid both racial and artistic persecution.

And the war years became one of the most fruitful periods for Danish jazz. For one thing, the nightlife in Copenhagen boomed during the German occupation. Clubs and dance restaurants featured live jazz performances on a regular basis and big swing cavalcades drew audiences of up to 8,000, according to an old news clipping. Because of the war, no British or American musicians were touring and jazz records were not imported from overseas, meaning Danish jazz musicians were able to perform and record as never before.

So jazz, in Denmark and in other occupied territories, became a music of resistance. It was the music of the Allied forces, a music despised by the Nazis, and a music of joy and syncopation in a time of fear and regulation. The symbolic significance of jazz during the occupation resulted in a huge rise in audiences.

Race and ideas of authenticity had been part of jazz since the very start, and it also played a part in the creation and reception of the Harlem Kiddies. Jimmi and Jonny Campbell, whose African-American father had arrived in Copenhagen in 1891, teamed up with Kaj Timmermann, a drummer with a Congolese-Danish background. Timmermann saw the potential in a black and white orchestra that could play on assumptions about jazz, blackness and authenticity.

Kaj Timmermann and the Campbells were largely ignored by the German forces of occupation. But band members were met with both acceptance and harassment in varying degrees.

Raquel Rastenni, the Jewish lead singer, was heavily harassed, particularly by the Danish national socialists, and eventually had to flee Denmark in October 1943 along with the majority of Denmark’s Jews. Yet she was also loved and likened to Ella Fitzgerald. Rastenni later expressed the seeming impossibility of the situation:

There we were, on stage in the Café München. Three negro boys and a Jewess, while the Germans tore up and down the streets in Copenhagen.

The prominence of the Harlem Kiddies reveals the intricacies of race and national identity under the occupation. The audience, which hailed them as some of denmark’s best musicians, also insisted that it was their un-Danish interracial nature that made them so. This slap in the face of Nazi ideologies of racial purity meant that the band was embraced as part and parcel of the everyday Danish resistance to the Nazis.

Anne Dvinge has received funding from the Danish Research Council of the Humanities and the European HERA fund.

This article was originally published on The Conversation. Read the original article.