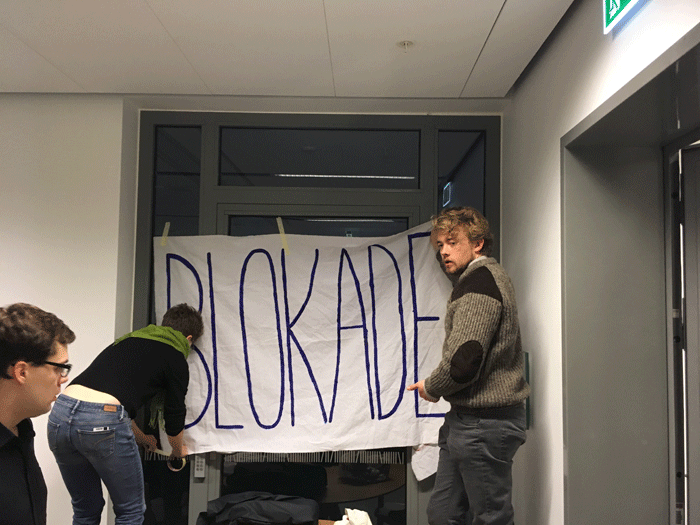 Students blockade the Dean's Office, Faculty of Humanities, Tuesday, 15 November, in response to rumours that it plans to shut down and merge department libraries

[UPDATE: As of Tuesday, 15 November, Students have initiated a blockade of the Dean’s Office at Faculty of Humanities in response to rumours that it plans to shut down and merge department libraries. People are unable to access the Dean’s office because of the protesters. However, the staff have not shown up and tried to enter the building. The protest is still underway. The following reportage is an account of what took place at last week’s meeting where the decision to conduct the blockade was taken.]

It was not a large group of humanities students who gathered to take part when the humanities student council HUMrådets announced a public meeting at the Faculty of Humanities, KUA. Just under 50 people sat inside an auditorium which has seating for five times that many. And toward the close of the meeting, the number was reduced to 32.

But they were frustrated.

The Faculty of Humanities savings plan means a DKK 3 million cut from library budgets. Rumours were circulating around the KUA campus that this money was to be found by closing and merging department libraries. Associate Dean Julie Sommerlund denied the existence of such a plan for the libraries. But the rumours were still there, and the humanities student council said it was time to act.

The frustrated students agreed. When the meeting ended, they decided to block access to the Dean’s Office.

“I showed up tonight because I think it’s a real, real pity that the department libraries are to disappear,” said student of English Jonas Uri when the University Post spoke to him after the meeting.

“Partly because I have used them as a study space myself, but also because it has been a great support to have the department librarians”.

At the end of the meeting, the frustrated students agreed to block access to the Dean’s Office.Photo: Mattis Løfquist

Jonas’ own library is at the Department of English, Germanic and Romance Studies (Engerom) and it had already cut back so much that it – according to another student at the meeting – is only a shadow of itself. Now Jonas is fighting against the same thing happening at other departments.

“If you close the department libraries, what’s next? It’s not just books, it is also places to study. Will it end with all humanities students or all the university’s students sitting out at the Black Diamond, Royal Library building? Well, there’s no room,” says Jonas.

Books the most important thing

At the meeting, several students talked of the contradiction between cutting back on department libraries at a number of study programmes at the Faculty of Humanities, in precisely the subjects where you are expected to read. They also mentioned a basic issue with the expected cut.

“In my own study programme of ancient civilisations, our books are indispensable as preparation for the classroom teaching. They are basically the essence of our study. Without access to the books, which I have used as late as today, there is no study programme. So if the books disappear, so does our study programme. It is as simple as that,” says Jens Kongsted, who is studying Assyriology.

We need more money, not less

According to Amalie Tom-Petersen, spokesperson for the Humanities student council HUMrådet, it is not just the room itself or even just the books which are an important resource for students:

“We also need to get the professional advice from the librarians who have nearly 40 years of experience in our fields of research, and it is very important to us that this is something we can have access to,” she says.

There is nothing new in the Humanities cutbacks. But part of the student body is apparently more than usually upset about the cuts to precisely the department libraries.

“DKK 3 million doesn’t sound like a lot of money in this context. But this is an area that has been cut back on consecutive years and which has slowly been worn down. So it’s just important for us to say ‘enough is enough’. In fact, we need more money rather than less, although this is unfortunately not on the table,” says Amalie Tom-Petersen.

The blockade of the Dean’s Office in building 15 at KUA campus will begin on Tuesday 15 November, where the first students will show up before 8 am, and then continue to blockade the office until the end of the working day.