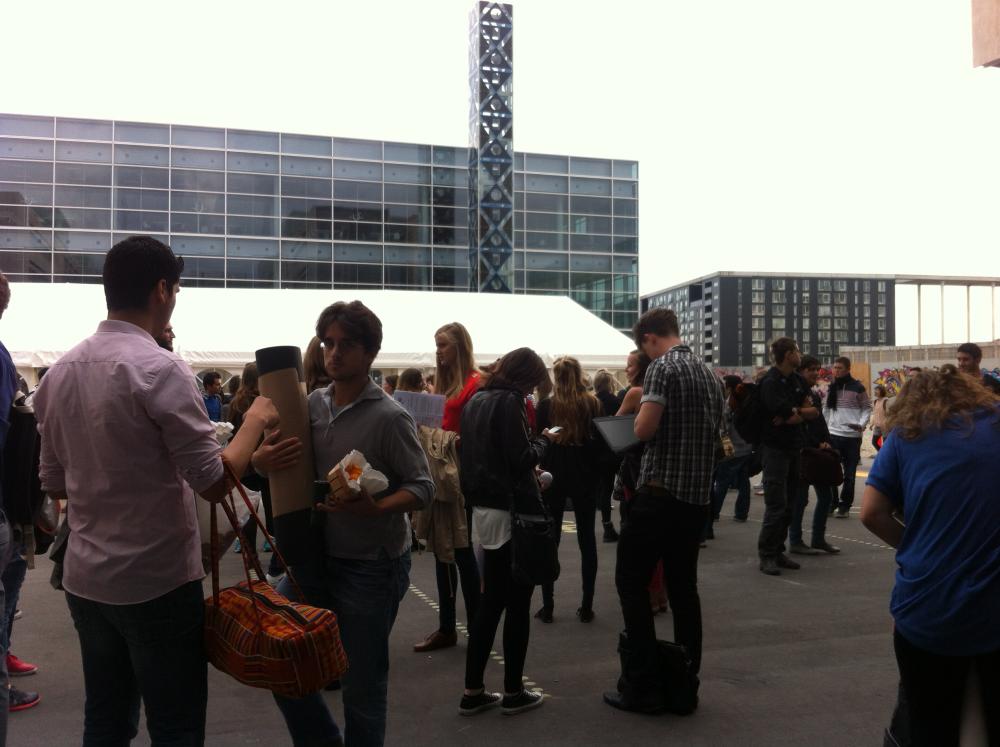 From a previous event at the Faculty of Humanities. Students are to stage the 24-hour protest Monday through Tuesday
image: Victor Yakimov

Angered by government plans to reduce programme numbers, humanities students will stage 24 hour take over of buildings Monday until Tuesday

While the Humanities campus (KUA) might not be the ideal sleeping situation, students are willing to cuddle up on the cold floors to prove how important their education is.

The recent proposal by the Danish government to cut 4,000 study places from Danish universities is meant to reduce student numbers in programmes with high unemployment, a process known as the ‘dimensioning’ plan.
This will disproportionally affect programs in the Faculty of Humanities, possibly leading to the closing down of 27 of the 60 programs in the Humanities.

It is the faculty of Humanities’ student council, HUMrådet, that is organising a sit-in to protest these cutbacks.

“We love our university so much that we would gladly spend more time at it and we want a peaceful, cozy protest to show the ministers that our education is worth something,” says Morten Danielsen, a third semester philosophy student, who is volunteering to raise awareness about dimensioning and the protest.

Schedule for the sit-in

The protest starts Monday morning at 9.00 and ends 24 hours later on Tuesday morning. While some might assume the sit-in is just an excuse for students to have a bit of fun together, the day will in fact be filled with guest lectures and workshops.

HUMrådet, the organizers of the event, have invited politicians, faculty members, professors and speakers to come and talk about the implications of dimensioning and hold workshops about career opportunities for humanity students.

At 12 noon, balloons will be released for each student that would be denied a spot in humanities if the proposal were to be implemented. More information about the event can be found
here.

“Dimensioning is itself not inherently bad, as the university does it every year, but the way that the minister is doing it is not looking at the correct numbers and really generalizing about a state of affairs,” says Danielsen.

”For example, she [Minister of Higher Education, Sofie Carsten Nielsen Higher Education, ed.] takes statistics from 2003-2013 and looks at people who get jobs one to two years after graduating, when a lot of the time, that’s where humanities students volunteer or do other work to help them qualify for a job later,” he says.

The Department of Cross Cultural and Regional Studies (TORS) is expected to be one of the hardest hit departments, as they would need to cut 75 per cent of their student body. This would affect students who study languages such as Arabic, Polish or Chinese and subjects such as Minority Studies and Comparative Cultural Studies.

Sit-ins across the country

The sit-in at KUA already has over 400 signed up.

Aarhus University, Aalborg University, the University of Southern Denmark and Roskilde University will also be holding 24-hour sit-ins. More information about the sit-in and the protest can be found in the fact box above right.