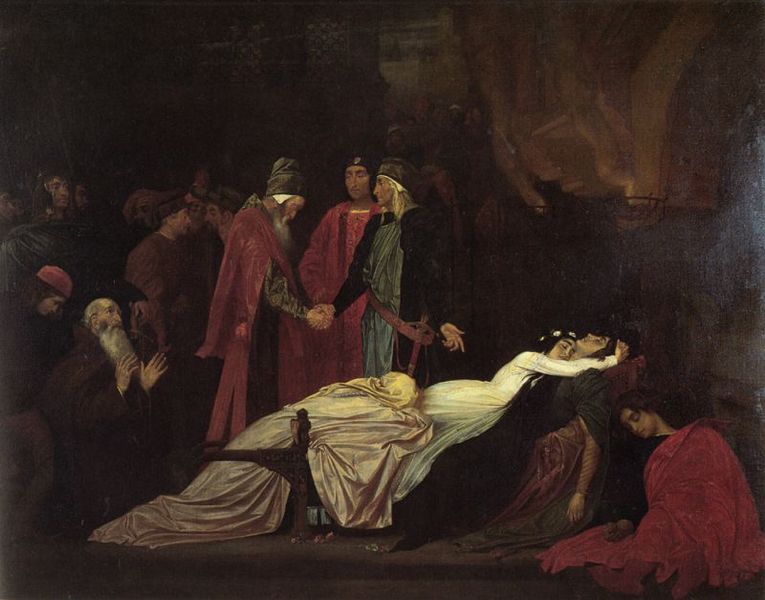 The Reconciliation of the Montagues and Capulets over the Dead Bodies of Romeo and Juliet
image: Frederic Leighton (1830–1896), public domain

Julie's boyfriend recited Shakespeare on his knees, crashed her sailboat, and hunted down her apartment - and they still wound up together

The way I met my current boyfriend was a good mix of romantic, funny and just weird. I was sailing around the islands south of Fyn with a couple of friends on a small sailboat. After a couple of days we decide to make a stop on one of the islands, Ærø.

While we are sitting in the harbor drinking beers, my friends run into a guy from their school, also visiting the island for a birthday bash. He seems to yap on about himself, and I am unimpressed. Nevertheless, our group ends up crashing the party – even though I hadn’t showered or changed my outfit for days.

The party is a bit formal, and I am seated at a long table surrounded by relatives. Without me noticing, the guy crawls all the way below the table from the other end and ends up at my feet.

Crawling up below from the table and between my legs, he starts acting out a monologue of Romeo and goes: “Julie, oh Julie, what beauty the eye beholds.”

What I didn’t know at this point was that this guy was studying to be an actor, and was rehearsing for the role of Romeo in a stage production.

He goes on for a short while, then performs a sketch from an old Danish film where a couple who have been married for 40 years are lovingly arguing and rounds up with an old Danish song that goes something like “I wish you would be my girl”.

At the end, with the whole party staring, he reaches out and asks if I want to be his.
Completely flabbergasted, and also very insecure about the sincerity of his performance, I say no.

He walks away and his family tries to mend excuses for me, saying “Sure, we understand, I mean, he can be a little too much”.

But my interest in him grows over the rest of the evening, but as it does, the more shy he gets. He doesn’t want to dance, and we don’t have any real conversations for most of the night.

In the end, when the party is over, he asks me if he can come with me and sleep on the sailboat. I say no, but ask if we can meet for coffee back in Copenhagen.

“I don’t want to meet anybody for coffee!” he shouts. “I want passion and fierceness right now!”.

What do you say to that? What does it even mean? I don’t have an answer so I kiss him and say that it was nice to meet him, before turning back to the sailboat.

I lie awake in the sailboat thinking of him, when suddenly the boat starts shaking from side to side and he appears. He says that he just has to sleep on that boat.

I am so overwhelmed that I say yes. We have a great night – or more like early morning – and the day after he comes sailing with us.

The day after I return to Copenhagen, he finds his way to my apartment after hunting down my address. This time he is shaky and shy, won’t sit down for the first two hours, or drink anything. Eventually he calms down and we start talking, and we have been together ever since.

See the other romantic stories here.