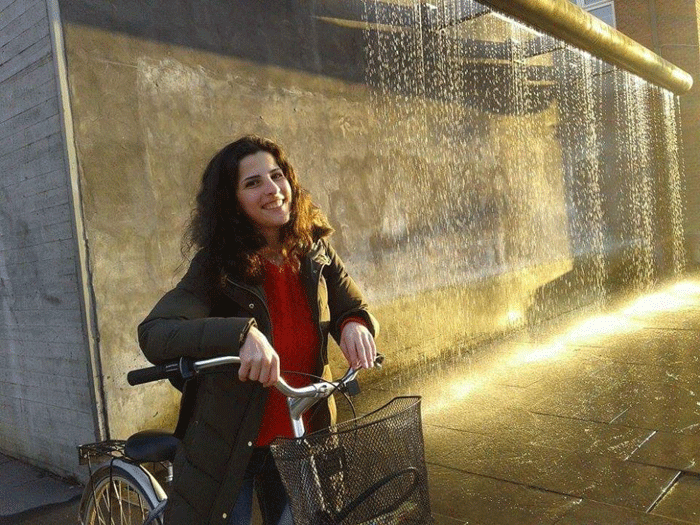 SCHOLARSHIP - a year ago, 26 year-old Katia Soud received a scholarship from the University of Copenhagen and left Syria to study human biology. She loves studying her chosen field, but finds it hard to focus on her studies because her family is still lives in the war-torn country.

When the University Post meets Katia Soud at the Students Club at the Panum Institute, she is dressed in denim from head to toe. She has big curly hair and speaks English with an accent that is hard to place.

“People often think I am from Spain, then when I tell them, I am Syrian, they are like ‘ah, oh….’ The facial expressions…. I really should videotape the reactions I get!” she says.

Katia Soud came to Denmark in August last year to study human biology at the University of Copenhagen (UCPH). She has a degree in pharmacology from the Syrian coastal city Latakia, where she worked for a year before she received a scholarship for highly talented students which made it possible for her to leave Syria.

“I was awarded a full scholarship, which covers tuition fees and a kind of a basic salary. That was a key thing. I would never have been able to get out of Syria without the scholarship,” she explains.

The University was bombed

Even though Katia Soud had already completed her degree in pharmacology, she began looking for opportunities to study in Europe. That is how she became aware of the University of Copenhagen which was one of top universities in her fields of interest. And she had heard a lot of positives things about Denmark.

”I also chose the university because I had read a lot about the country, it was peaceful, people were kind, and there was freedom and democracy, and safety.”

»“I was awarded a full scholarship, which covers tuition fees and a kind of a basic salary. That was a key thing. I would never have been able to get out of Syria without the scholarship«

Security was hard to come by in Latakia, despite the city not being as harshly affected as the nearby cities Homs and Aleppo.

”My university was bombed. They bombed the faculty where my brother studied. Luckily he was not at the university that day. About 30 students died. So yeah, it is not safe. It is so random, you never know. Even in a relatively safe city like Latikia, there are only safe periods.”

Katia Soud could hardly believe it when she received an e-mail telling her that she had been accepted to the University of Copenhagen and would be receiving a full scholarship. In fact she was was so skeptical that she did not tell her parents about it, but contacted the university to make sure that it was not a mistake or a spam-mail.

”In Syria, those kinds of documents are printed in paper with a signature. I only got an e-mail, and even though I read it over and over, and it looked real, I thought it could be a spam e-mail.”

»”My university was bombed. They bombed the faculty where my brother studied.«

When she received a mail confirming that she had been accepted by the university, she jumped out of bed and started jumping on her bedroom floor which was completely dark because of a power outage.

”My parents came in to see what was happening. I showed them the letter, and my father’s first reaction was also quite skeptical. An e-mail? But even when he accepted it he asked me not to celebrate to early. Wait until you get your visa, he said, be realistic.”

First time standing on her own two feet

Because there is not a functioning Danish Embassy in Syria, Katie Soud had to travel to Libanon to get a visa.

“I had to wait such a long time, like 5 weeks, and go back and forth to Lebanon three times. I was really worried I would not get the visa approved, you know Syrians have a kind of ‘bad reputation’, I was thinking I might get a refusal even though I was going as a student.”

»“People often think I am from Spain, then when I tell them, I am Syrian, they are like ‘ah, oh….’ The facial expressions…. I really should videotape the reactions I get!«

Katia Soud was able to get a visa and she traveled to Denmark on 22 August 2015.

“Then when I finally left, it was my first time at the airport, my first time in an airplane and the first time I was living on my own. It was really overwhelming. I was both nervous and excited.”

» I listen to all kinds of Danish music. I quite like Natascha, you know her?”«

To prepare for life in Denmark, Katia Soud downloaded a language app and started to practice Danish.

”When I got accepted to study in Denmark, I started learning Danish with an app, Duolingo, you know that one? It is good, but Danes pronounce everything completely differently to what you learn from the app. I also started listening to Danish music. At first I thought the language was very harsh, but then I got used to it, and now I like it. It is a very unique language. I listen to all kinds of Danish music. I quite like Natascha, you know her?”

Education is the solution

A year later Katia Soud is fitting in well in Denamrk and at UCPH.

“Of course, when I got here, I had to adapt. I got these huge textbooks, and I was like, how should I deal with this? How should I approach the reading? The first block was a test for me. But then I did really well at the exams and that motivated me. I also asked my friends, both Danes and internationals, how I should deal with this. But in the end, it’s always you who can understand how you can deal with it, you know.”

Katia Soud’s family still lives in Latakia and it can be a challenge to focus on studying when a power outage or a faltering internet connection prevents her from getting in contact with them. Even though she worries a lot about her family in Syria, she does not currently have any plans of returning to Syria.

“I am not thinking of going back to Syria for several reasons. First of all, I will not be able to apply my knowledge back home. With the war happening there is no funding for research, I will feel useless. And then, I also have ambitions of doing more research, a PhD. perhaps. And I really have in interest in this area, I would like to stay here to be able to learn more and develop new things.”

According to Katia Soud education is the best way to help Syria.

“I think education is a key factor. You need to be able to analyse your reality to come up with solutions.”

That is why Katia Soud is taking part in the Danish Refugee Counsil’s nationwide charity collection on Sunday, where she has paired up with prorector Lykke Friis and her Dog Winston to go door to door in Frederiksberg. The donations will go to helping Syria and South Sudan, and other charitable causes .

“The charity collection is a way to show solidarity. It is also a way to help people no matter what their nationality is, to get basic rights, for example the right to education. Through solidarity, people and societies can contribute until the point in time when a political solution is found,” she says.