Ice installation: See it before it melts away 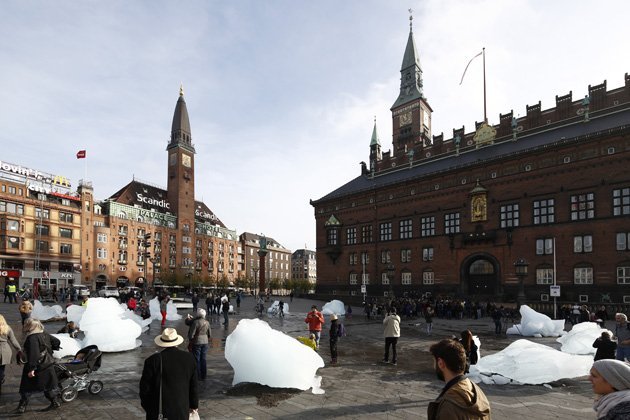 by: Martina Zamboni and Alberto Cereser

Sunday morning and Copenhagen woke up to 100 tonnes of ice in the middle of Rådhuspladsen, the Town Hall square. The ice blocks were harvested from a fjord in Greenland, shipped to Denmark in four refrigerated containers and now sit in front of the Town Hall, where they are slowly melting as a reminder of the receding ice cap.

Behind the installation ‘Ice Watch’ is Danish-Icelandic artist, Olafur Eliasson, and geologist and University of Copenhagen (UCPH) professor, Minik Rosing.

The project marks the meeting in Copenhagen of the IPCC, the body of the United Nations reporting on climate change, that is due to release its Fifth Assessment Report later this week. The project also coincides with a large UCPH-organised IARU sustainability congress which was held last week.

Eliasson and Rosing hope that the ability to the melting ice will make people more aware of the reality of climate change and provoke action.

”Ice Watch makes the climate challenges we are facing tangible,” says Eliasson, who is known for large-scale artwork that is inspired by science and natural landscapes.

”I hope that people will touch the inland ice on City Hall Square and be touched by it. Perception and physical experience are cornerstones in art, and they may also function as tools for creating social change.”

The future of our civilization and the destiny of glacial ice are tied together, according to Minik Rosing.

”Science and technology have made it possible for us to destabilise Earth’s climate, but now that we understand the mechanisms behind these changes, we have the power to prevent them from growing,” he says.

Ice Watch will be on view until Wednesday, 29 October. See photos from the installation below.