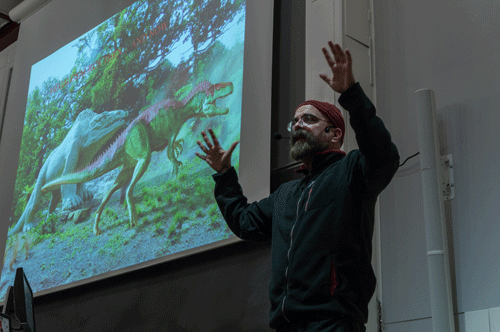 Tyrannosaurus Rex was bent over and covered in feathers, says renowned paleoillustrator

Renowned dinosaur illustrator Luis Rey revealed amusing facts about dinosaurs at a sold-out talk at the Natural History Museum’s ‘Wine and Science’ series. One of the most profound examples he put forth was the change in interpretation of the Tyrannosaurus Rex.

The original illustrations make the T.Rex look as if they are walking upright in a similar manner to humans. The reality is that the Tyrannosaurus Rex was bent over and covered in feathers, shattering the perception that most people hold of its appearance.

”There is nothing further from a dinosaur than an oversized iguana,” Rey proclaimed, citing a number of inaccurate depictions of dinosaurs, even up to the 1990’s.

While the talk included many of his own illustrations, the greatest emphasis was placed on the process of translating scientific evidence and fossils into accurate depictions of the prehistoric creatures.

Many of the depictions of the dinosaurs have been open to vast variations and interpretation. From a few bones and fossils, illustrators are expected to create accurate drawings of these prehistoric monsters, but are often swayed by the prejudices people have.

”The process of illustrating a dinosaur is like finding a piece of a car and trying to build it entirely. It is virtually impossible to get right,” he said, ”unfortunately you also have the mind in the way.” According to Rey, the public’s expectations of how dinosaurs are supposed to look influences their judgement, but the whole process teaches you that prejudices can also shape science.

As an early proponent of the idea that most dinosaurs were in fact feathered and not scaly, Rey’s evidence-based approach to his illustrations represents his deep philosophical considerations about perfecting the link between science and art.

While accuracy is paramount for Rey, he concedes that the artistic liberties he is afforded make his profession so enjoyable. He emphasizes the importance of maintaining his own style to keep the illustrations unique while working with the hard facts.

”That’s the challenge for all the artists, you have to try with what you have while maintaining the aesthetically engaging features of the works,” said Rey.