In Sweden where the grass is greener 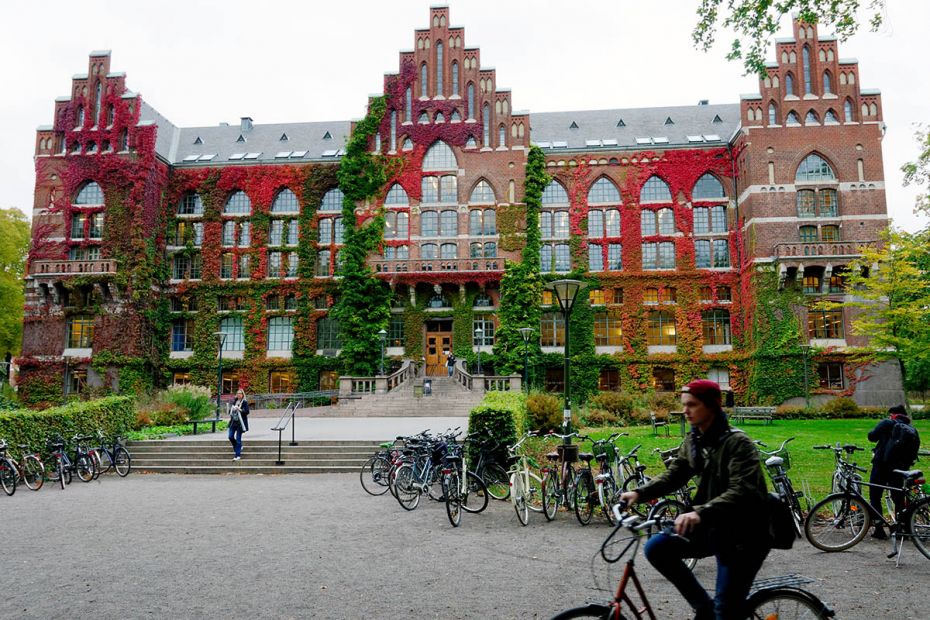 Lund University has a very large, integrated campus with many different buildings. Here is the university's largest library. Almost everyone uses a bike to get around.
image: ANDERS FJELDBERG

Four Danish students talk about why they have chosen to study at Lund University on the other side of the Øresund, in Sweden instead of the University of Copenhagen: They point to interdisciplinarity, and the freedom to select your own education from 2,000 courses

Is it to avoid the Danish Study Progress Reform with its requirements to pass quickly or get thrown out? In Sweden there is no study progress reform, so all students can take as many courses over any length of time they want, and it costs nothing.

Or is it because Lund University offers 2,000 courses that students can choose freely from and select their own education?

The University Post took the train across the Øresund to examine whether the Swedish paradise for students on the other side is true. Are these many course choices so important, that Danish students are willing to travel to Lund to study?

The university’s department ‘for national recruitment and marketing’ has found four Danish students available for interview – two at a time. One of them is Clara Nepper Winther. She studies for a ‘Bachelor of Science in Development Studies’ at Lund University.

The university could also offer her something else. “UCPH does not have a single undergraduate program in English. UCPH only offers it on the master’s programmes, and I reckon it makes most sense for me to learn politics in the English-language when I am to deal with international cooperation and understanding afterwards. That is why I wanted to study in English already on my bachelor level programme,” says Clara Nepper Winther.

She likes being able to specialize and the fact that she could take her electives on exchange already during her Bachelor programme. She would not have been able to do this if she had studied Political Science at the University of Copenhagen.

Alexander Blum Bertelsen is a third semester student of Peace and Conflict Studies, a programme consisting of political science with multiple interdisciplinary perspectives on violence and conflict. He would not have been able to study it at UCPH, he said.

“In all the countries around us you can study conflicts where the focus is not primarily on the state. You just cannot do that in Denmark, but here in Lund we have more focus on the conditions for ordinary people through, for example, postcolonial and feminist research,” says Alexander Blum Bertelsen.

He believes that political science at the University of Copenhagen is too conservative in its choice of theory.

“Lund University teaches instead several different analyses of the structural repression of violence that is a characteristic of a complex world. In order to understand it, you need to borrow from several different disciplines at the same time. For me, it’s innovative to go to problems with this interdisciplinary approach,” says Alexander Blum Bertelsen.

Kristoffer Bahrenscheer mixes his social anthropology with a study in the philosophy of language and semiotics, and he is pleased with the many options that Lund offers.

“This is where the Swedish system is better. You can juggle a little bit more with things,” says Kristoffer Bahrenscheer. Linea Brink Andersen agrees with him:

“I can mix my programme of study with courses outside linguistics in a way that I would not be able to it at the University of Copenhagen. In Lund, I have chosen to mix linguistics with cognition and neuropsychology,” she says.

She adds that this particular programme has something that she also likes about UCPH, namely the exam form.

“I have not yet been to an oral exam over here, and I think that’s part of the programme. Some courses at Lund University only have the duration of one month, and it can be hard because it is like being in the exam period all the time,” she says.

None of the four students live in Lund. All have chosen to stay in Copenhagen rather than move across the Øresund straights. Most due to a boyfriend or girlfriend in Copenhagen. Each of them needed to respond to the cultural, social and practical issues in studying in another country, Sweden.

This has its challenges. One of them is convenience.

“If you start a study programme in Lund, for example, you need to immediately check whether it is on the so-called ‘fast-track list’. If it is not, you shoould begin in good time to get your SU study grant approved for it,” says Linea Brink Andersen.

One of the many buildings on the Lund University campus

This is why Social Anthropology at Lund is on the so-called fast track list, and this gets approved for Danish SU.

“The SU board in Denmark did not reckon, for example, that I had documented that Lund is a recognized university by the Swedish government. Nor could it figure out how I put together my own programme from the many subjects that Lund University had to offer. The SU board had as its premise that ‘this will be a real mess’. This said, there were no problems getting SU when they first had approved my education,” she says.

Can be a tough start in Sweden

And then there are the cultural challenges in studying in Sweden.

“It was insanely hard in the beginning with the Swedish language. When I got home, I slept immediately. But I have a knack for languages, so over time I caught up on the Swedish,” says Alexander Blum Bertelsen.

Café Lux and a meeting spot on campus. Universities in Sweden do not own their buildings, but renovation and modernization are taken care of

He considered moving to Lund, but got a Danish girlfriend in Copenhagen and stayed on. Even he knows only a few Danish students who have chosen to move to Lund.

This can lead to social challenges:

“Your student life and your social life get separated when you study in this way. But we are a large community of Danish commuters, a community that enjoy ourselves socially on the train rides,” says Alexander Blum Bertelsen.

Need to actively seek out your social life

The campus area of the University of Lund has 30 large reading rooms in the many buildings.

At one place, the auditorium has modern, clean lines, at another place, a reading room is reminiscent of a scene from the Harry Potter-school ‘Hogwarts’. The small town of Lund nearby helps give the place some atmosphere.

A small reading room in a library on campus

“It has a really nice vibe at Lund. It feels more like a British university. There are more student places, the cafés are cheap, and there are several big meeting venues,” says Kristoffer Behrenscheer, but adds that you have to be prepared to do something yourself.

“People receive you well as a Dane, even though they may need to speak English to you in the beginning,” says Linea Brink Andersen.

Transport costs to Lund are something you need to be aware of.

Right now, Alexander Blum Bertelsen pays DKK 600 a month for a youth card, which applies to Lund and the whole Copenhagen metropolitan area. He is certain that the system will work for him while he studies for his bachelor’s degree in Lund, but the system of a youth card for students has changed with effect from 1 July 2016.

“As I understand it, I will be only affected by this if I go on to do my master’s at the University of Lund,” he says.

You should therefore consider these factors before you, as a Danish student, start taking off to Lund to take the hour and a half long – while the temporarily introduced passport control slows the trip – train journey across the Øresund instead of the – perhaps 10 to 15 minutes – bike ride to UCPH.

A sports hall in the campus area provides, for a relatively modest annual fee, access for all students to almost all kinds of sports. Here is the entry point to the sports halls, which are large and extend backwards to the left in the image.