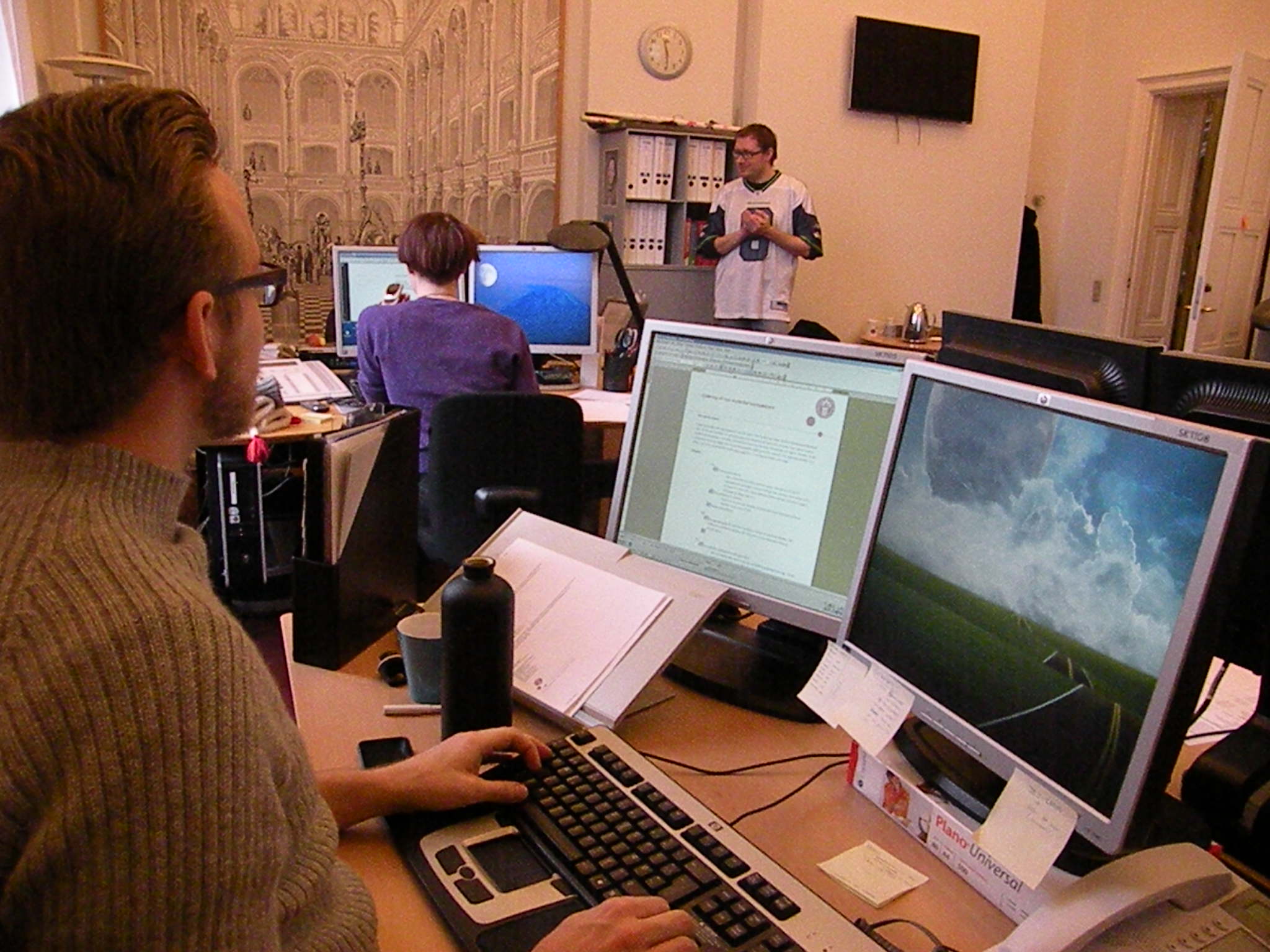 At the IT call centre on Central Campus Monday. After the first rush, there were no more calls than usual, staff said
image: Mike Young

Webpages, intranet, e-mails, servers failed on a day when many Copenhagen students were to be given exam questions

Staff and students were suddenly allowed to re-visit the stark reality of the 1980’s.

This was after an antiquated, but key, storage system crashed Sunday night, knocking out e-mails, websites, intranet and servers for the whole of Monday.

As we report now, some systems are up and running again. However University of Copenhagen’s Ku.dk and the internal KUnet are still down. Faculty pages appear to be operational.

But yesterday Monday, no administrators, staff or students among the 45,000 plus population of the University of Copenhagen were able to receive e-mail, access or save files, or use the internet on university computers.

It was the so-called DNS server »affecting actually only 5-10 per cent of our system,« that was down, Vice Director for IT at the University of Copenhagen Bo Bendtsen said to the University Post whose reporter found him in Central Campus between crisis meetings Monday.

The failed storage facility, affectionately called ‘Eva’ by IT staff, was to be phased out at the end of January anyway. Now her replacement, a newer, more effective, system, has been rushed into service.

As for the failed Eva. She was of course the 5-10 per cent of the system that mattered. According to the first reports, the outage apparently occurred Sunday night.

»When the IT department operator goes home 22.00 Sunday things were still working, but when we got in 7.30 it was gone,« explained Birgitte Pedersen from the IT department’s call centre, who subsequently explained to the University Post that after the first rush, she and her colleagues had a quiet day, as staff and students realised that there was nothing to be done.

Unable to send out exams

She, and her colleagues at the call centre, were at this time under the impression that the outage only affected the Central Campus and Law faculties. Later, as it turned out, the whole university was down.

The site UniversityPost.dk was shut off by the outage, with no access to uploaded articles and servers for journalists and no access to the web for readers. Wireless web access on campus through the Eduroam system, and the University’s own intranet system KUnet were also hit. But maybe the biggest worries were out in the Faculties, as a series of exam assignments were slated to be sent out Monday.

»What does this mean for us who have exams today?« wrote a worried student on the University Post facebook.

Unfortunately neither we, nor most others were able to help: An exam secretary at the Faculty of Humanities told our reporter that she was unable to send out exam assignments. Monday night the Faculty of Law said that it had postponed several key exams to Tuesday. Other faculties have relayed information via other channels.

The University Post asked Vice Director Bo Bendtsen yesterday Monday, whether there was any risk that data or e-mails had been lost.

Are you still affected by the IT blackout? Let us know immediately on miy@adm.ku.dk or uni-avis@adm.ku.dk