It is crazy week for the student counsellor 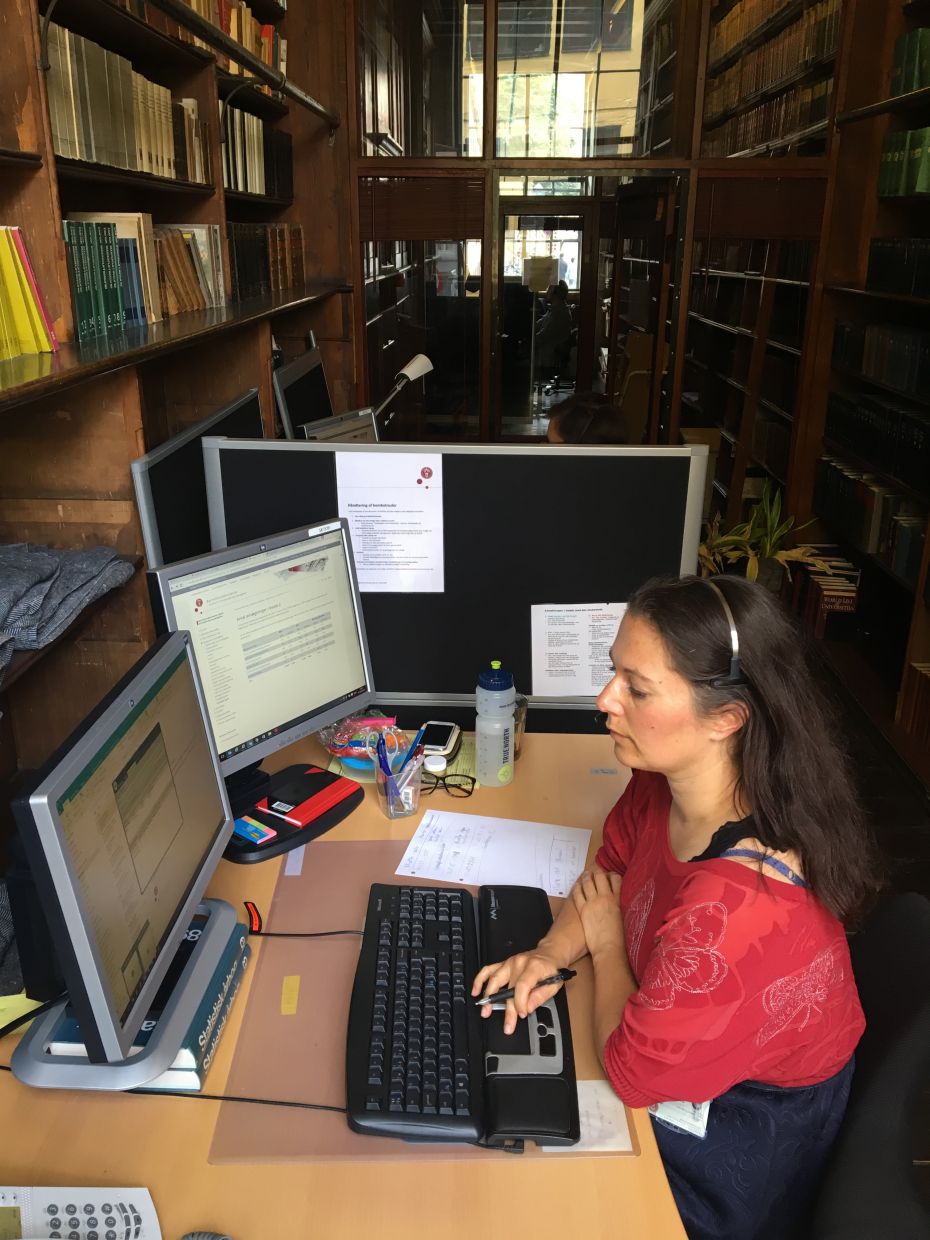 Help! ”What was it? Do you have to pay for your bachelor’s degree, if you have one already?” Student counsellor Randi Nielsen helps hundreds of confused and rejected applicants after this year’s quota of students has been admitted
image: Anders Redder

"Panic? No, there is no panic. But we are busy, very, very busy,” UCPH student counsellors are the receiving end of rejected applicants' calls in the busiest week of the year

At the end of the corridor in the otherwise peaceful university library on the street Fiolstræde, four student counsellors are in the middle of the busiest week at the Guidance and Admissions office. It is the week after the University of Copenhagen has notified thousands of applicants on whether or not they have been admitted to university.

Surrounded by linoleum brown furniture and old encyclopedias Randi Nielsen has two computer monitors in front of her and a headset on her head. She is in the process of guiding an unsuccessful applicant.

The time is approaching 1 pm, and in less than four hours, she has had 38 people on the other end of the line. She has been clarifying the situation for a number of desperate applicants who have all been waiting up to an hour and a half to get through the phone queue. Most calls are from rejected applicants in the quota 1 and 2 system, who are now looking at alternatives and need help.

“We are the first people they meet in this process”.

Randi Nielsen has been a counsellor at the University of Copenhagen for the last eight years. She shakes her head when the journalist asks whether the word ‘panic’ best describes a day at work after the admission responses have been published.

“Panic? No, there is no panic. But we are busy, very, very busy,” she laughs and continues.

“For counsellors, the most important thing is to remain calm. For young people, the yes or no to admission they see on the electronic UCPH system is everything. It can be devastating, and many of them are frustrated and distressed at not being admitted. The admission process is digitized so we can be the first people they have met during this long process – apart from us, they have only met the electronic system and application forms. This is why we need to remain calm, listen, and get them to see their rejection in a different perspective.”

“For counsellors, the most important thing is to remain calm. For young people, the yes or no to admission they see on the electronic UCPH system is everything. It can be devastating,” Randi Nielsen, Guidance and Admissions

She pauses for a minute, takes a deep breath and turns the phone on again. The queue has 40+ on it, and callers are lining up.

One of them is frustrated at not being offered a standby position. Another has a hard time studying in Odense rather than in Copenhagen, while a third caller is confused about when documentation for supplementary subjects is to be submitted.

Most of the calls today, however, are about being rejected under the quota 2 system, according to Randi Nielsen. The quota 2 system takes things like the applicants’ other acquired post-school experience into account.

“Many will have individual reasons for being refused admission under quota 2. ‘Why did I not get in when I had all this experience?’, they ask. But we had 11,236 quota 2 applications this year, and it is impossible to give personal feedback to them all.”

The Guidance and Admissions office has worked non-stop since admissions were published midnight Friday. Phones were, extraordinarily, open for callers over the weekend. And at the beginning of the week, the stream of questions and frustrations continues.

“Maybe it will open up new opportunities for you if you take the place in Aarhus or Odense, ” says Randi Nielsen, Guidance and Admissions.

“My most important task is to give counsel properly and correctly. Then, it is to get people to take a new, critical, look at their skills and choice of study. Maybe it will open up new opportunities for you if you take the place in Aarhus or Odense to study the subject of your dreams instead of being repeatedly rejected in Copenhagen. Or maybe you should seek other options than the study programmes that have the highest averages. If I can start this train of thought going, I have been a good counsellor.”

Young people in Copenhagen are not as mobile as they could be, says Randi Nielsen. They can often gain admission on a similar study programme outside Copenhagen, but they are too closely linked to family and friends in the capital city. Listening in to a few calls, I can hear that not many of the callers are open to this possibility.

The student counsellor does not tire of listening to young people’s frustrations. On the contrary, these days are among the year’s most challenging, she says.

“We are insanely busy, but that is okay too. The entire office is hard at work, and it is challenging and fun to help people find their best match when they could not gain admission to their first priority”

This reporter has been a fly on the wall at the Guidance and Admissions office, and reckons that these days must be stress provoking. The calls keep pouring in. Some of the callers are in tears, frustrated.

Yet the word ‘smooth’ is the first thing that pops up with Randi Nielsen when she describes this year’s admission week so far. Relatively smooth:

“This has been the smoothest admissions week ever, because the systems have been running well. In previous years we have had to develop the electronic system ‘My UCPH’ while operating it, and this has brought on glitches and bumps along the way. But this year has been different. So, yes, you might call it smooth – at least compared to the previous year,” says Randi Nielsen with a smile.

The phone is turned on again and she returns to the busiest week as a counsellor.