Katrine Worsaae’s double life above and below water 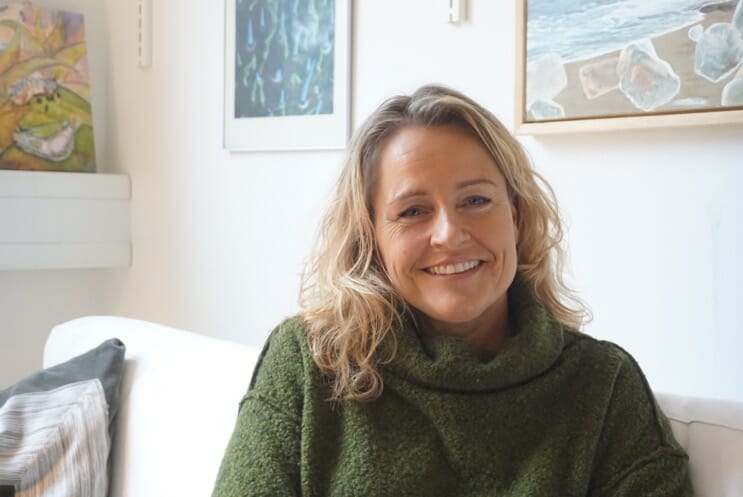 Life as a scientist — Associate professor Katrine Worsaae lives for the months that she spends near water. Her life journey has led her down into underwater caves populated by strange animals like the Zombie Worm.

These are first impressions when you dive into the cave. But things change the moment you start to be guided by the torch light. You cannot help holding your breath again, because looking at the surroundings, you feel like you have been invited into a fairytale.

An anchialine cave is a landlocked body of water with a subterranean connection to the ocean. It is a strange marine habitat, characterized by stalactites of grotesque shapes, and mysterious organisms – eels, worms, blind fish, and a great diversity of aquatic .

»They are rare and endemic,« Says Katrine Worsaae, who is an associate professor at The University of Copenhagen. When I meet her, she has just came back from a cave expedition to Turks and Caicos, a British overseas territory north of Cuba and Hispaniola.

»Some of these marine animals have been trapped for millions of years in this dark and nutrient-poor environment, and because of this they may have lost color pigment and eyes, and instead they have developed new intriguing sensory structures and means to move and hunt in these marine water crevices deep underground,« she says.

To better understand the evolution of cave fauna and its relations to the environment is one of the focal points in Katrine Worsaae’s research.

»Caves offer an evolutionary laboratory with a mix of trapped ancient forms and new colonizers showing rapid extreme adaptations. By investigating these animals and comparing them with those from other caves, deep sea and shallow water species in different parts of the world, we can dig into the stories of their origins. How old are they? Are they descending from the same ancestors? How do they get dispersed and adapt to new niches?« 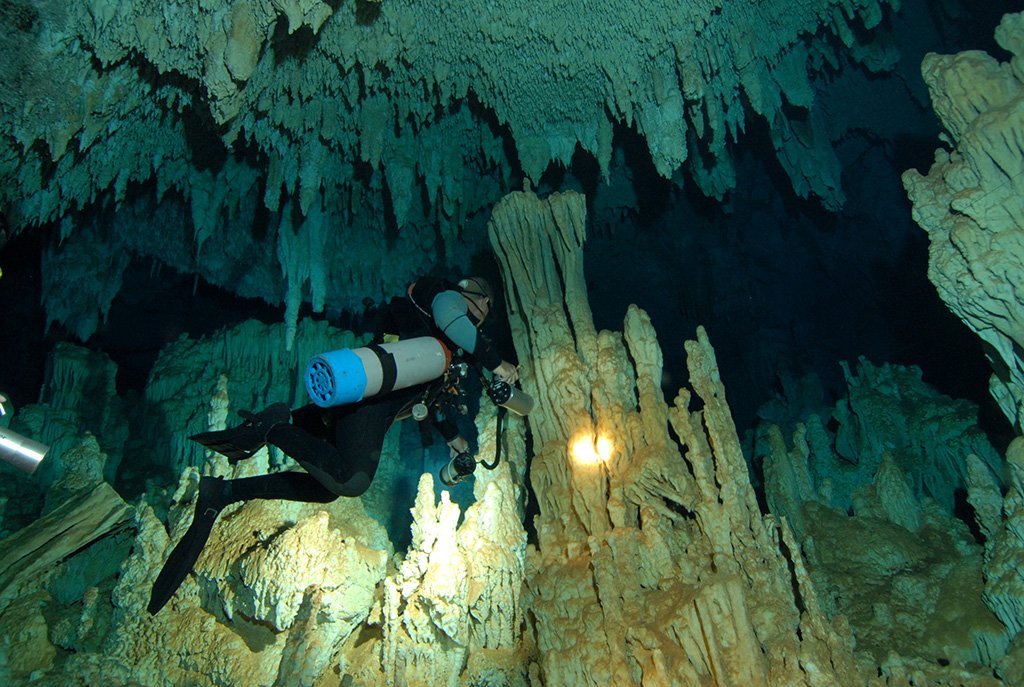 One of the fascinating things about studying ocean life is the way you approach marine animals. You cannot see them with your naked eyes below the blue surface. So you can either use a dredge and drag everything up from the bottom, or dive in yourself and chase after the animals.

In anchialine caves it is pitch black, so there is no photosynthesis. The groundwater column is extremely stable, preventing any large-scale injection of external organic matter into the system. So, when this column meets with sea water, a halocline will be formed because of a strong, vertical salinity gradient in the water body.

Exploring underwater caves is not without risk.

Fear is associated with too many unknowns. If I worry too much of these, I always start to think about my animals. It is the purpose of finding these animals that drives me to jump into an unknown territory and enjoy diving deeper and deeper all the time.

»Working in such an environment, of course, you are always supposed to adhere to certain safety rules. You cannot just go up if you run out of air or feel sick, you have to swim back to the surface. Even though cave-diving techniques have enabled the exploration of the anchialine environment, you should always carry extra tanks and lights and remember how to save yourself,« Katrine Worsaae says.

When asked how to overcome fear, she smiles:

»Fear is associated with too many unknowns. If I worry too much of these, I always start to think about my animals. It is the purpose of finding these animals that drives me to jump into an unknown territory and enjoy diving deeper and deeper all the time.«

However, being a marine biologist does not mean that you will embrace the blue horizon all the time. Doing research and analysis will take up most of your time time.

»After diving, we will bring everything we caught on our fieldtrip to the lab, and on the latest trip, for example, we did high-speed recordings to see how cave creatures behave and move in the water,« Katrine Worsaae says.

»The recent expedition to Turks and Caicos was only ten days. But we will spend at least one year back in the labs doing detailed anatomical microscopy studies and analyzing all the film, to see how genes are expressed in these cave animals, and how they morphologically and genetically have adapted to the environment.« 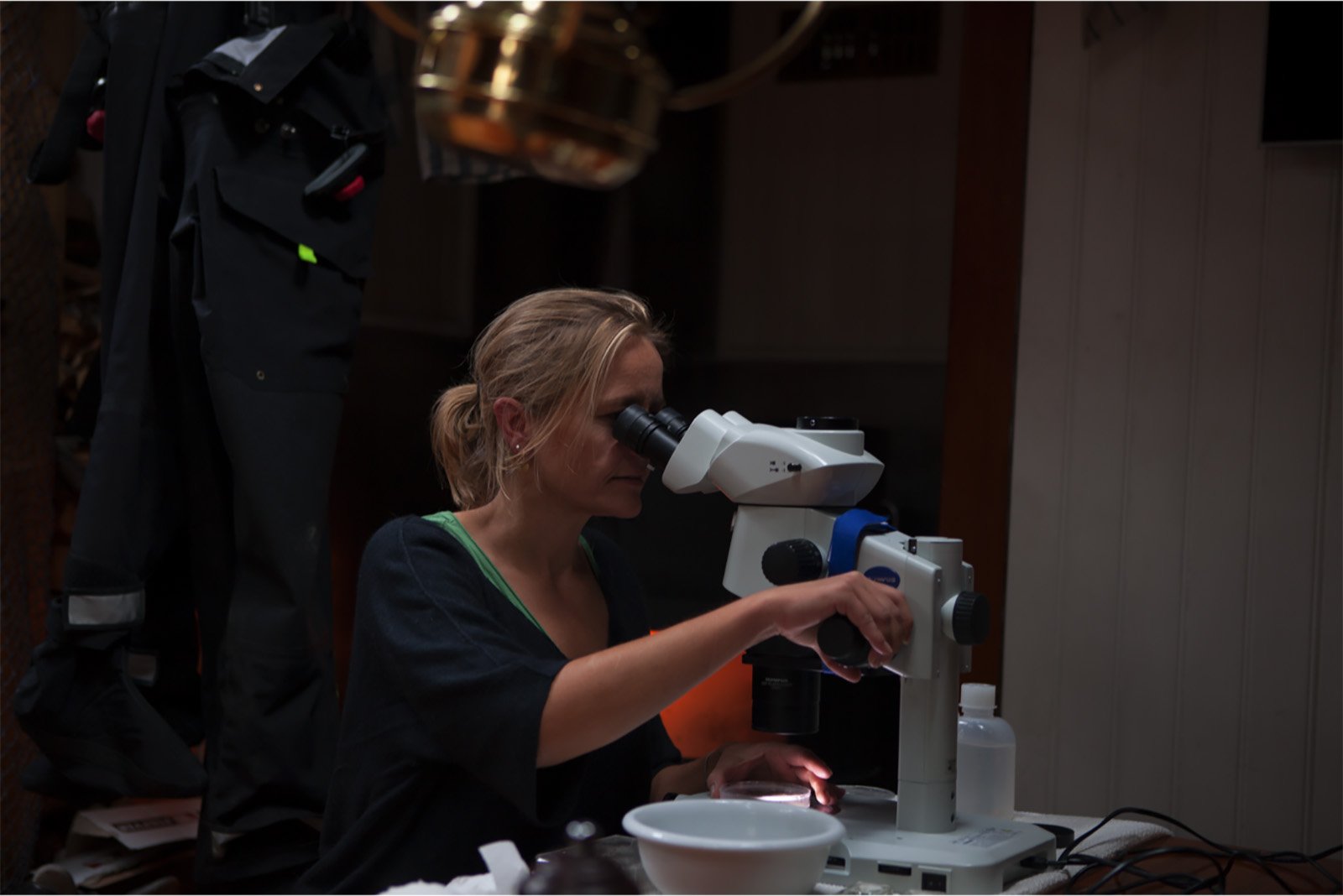 Research onboard a ship.
image: offered by Katrine Worsaae

»These days we can recognize new species in most marine environments because of their different gene sequences, even though they morphologically may look very similar to existing known species. However, in extreme habitats such as anchialine caves and the deep ocean, we still find very different new life forms representing unknown adaptations in form, genes and functions that will vastly expand our understanding of the evolution of animals and their biological features on our planet,« says Katrine Worsaae.

Since 2005, Katrine Worsaae and several teams of international collaborators have been working with a deep-sea worm called , found on whale carcasses. It has no gut system. It has roots, which contain symbiotic bacteria. The roots penetrate the whale bones using acid produced by the worm in order to uptake and feed the symbiotic bacteria with the oils and proteins contained in the whale bones.

»That is why people also call it the Zombie Worm. We found a whole range of new functions and developmental patterns in this animal, which attracts me the most and inspires me to explore it further combining genetic and morphological techniques,« says Katrine Worsaae.

»The field work is only a smaller part of my job as a marine biologist, on a yearly basis, I generally only spend two months or less within or close to the ocean. But these two months are still some of the most wonderful highlights for me. Every time I see the endless ocean blue, I feel happy. My appreciation of this vastly unexplored and enormous environment, hidden from our naked eye in the deep blue, just keeps growing in me.«

The attachment to the ocean also stems from her understanding of ocean’s relationship with humans.

»Humans tend to see the ocean as an endless resource that we can explore and pollute without realizing or feeling responsible for the effects. Yet most of us are aware that life originated in the oceans. Nowadays, the development of ecotourism also encourages us to be more aware of the treasures of the ocean. More and more awareness about climate changes and different environmental issues has recently also led to more attention to ocean life and its roles on our planet,« she says.

»As a marine scientist, one feasible way to aid to the environmental awareness and conservation is by studying the marine animals, providing new primary data for the analyses. For instance, we have described several new cave species representing unique biological systems, in Bermuda and Lanzarote amongst others, that have helped convince local governments to appreciate and protect these fragile ecosystems. Increasing our knowledge and understanding of marine habitats and their inhabitants may help a lot in management and protection afterwards,« says Katrine Worsaae.

In her spare time, Katrine Worsaae is actively engaged in different social activities related to scientific and educational talks in front of the cameras and behind the scenes. In 2013, a film team followed her and a larger crew of scientists and artists on an expedition to North East Greenland, leading to the art-documentary movie ‘Expedition to The End of The World’.

»Scientific outreach is also very important. There is so much available information nowadays, and it is so easy for people to get drown in this. Scientists have to explain to the public why we are doing this by sharing our knowledge; and help people raise the awareness of different issues. This is our honorable task.«