Kick off for university football 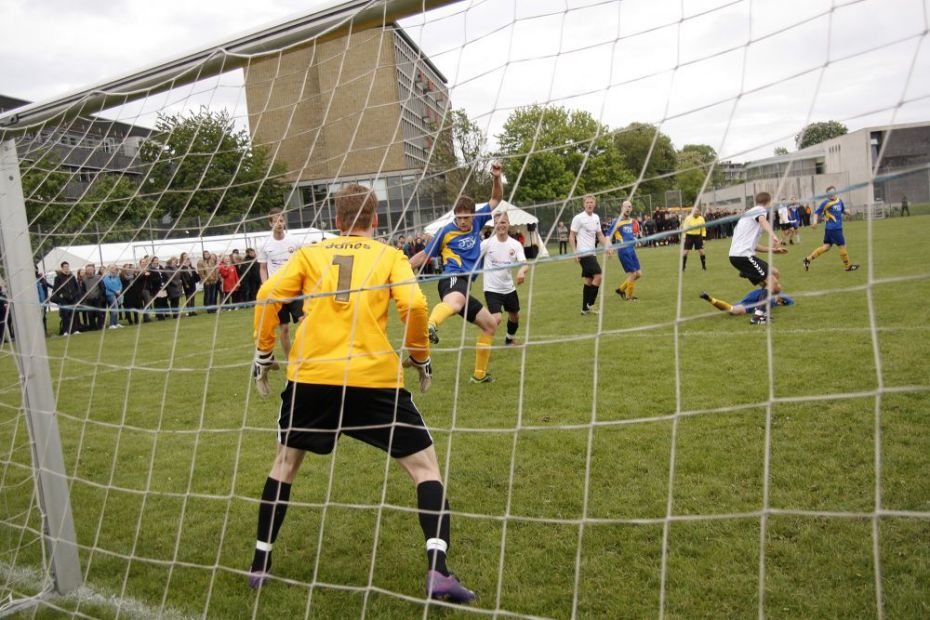 B1286 from history met Kuplens Kæmper from political science in the 2014 finals
image: Emma Flokstra Nielsson

It is about fun, companionship and serious sport when teams like FC Climacussen and Transcendentalpragmatisk Boldklub clash in the university league

At the end of October, the University of Copenhagen’s own soccer league, the university football starts a new season that culminates at the University’s spring festival in May.

Uni soccer is a mix of everything from coaches’ teams, bottom of the league teams, showdowns between arch-enemies, heckling from the sidelines, fan clubs and foamy beer.

In short: Here are all the ingredients for a real football league – maybe with the exception of high football salaries.

There is not much money in it. But on the final day of the last season, the union for Master’s students Magistrene and the Studenterhuset donated beer, concerts, after party and prizes.

“This was the day I really felt how much this tournament means for those who want it,” says Mathias Stilling, the man behind the tournament.

He and the other university football activitsts would like more football pitches in addition to the one they have already, and the opportunity to spread the word about the league.
.
“But money is not the main thing for us. When the ball rolls and the beers on the sidelines are served, then it is our community and the little round ball that means everything,” he says.

But why is there a need for a special UCPH tournament?

It is basically just a football league like any other one. And then it is not.

You can probably easily find places where they play seven-a-side soccer and where the squad may consist of up to ten players. Perhaps it is even possible to find a league where there should be a minimum of one girl on the field, but this is not what it’s about.

“The point of university football is meeting new university friends in other places than in the classroom or in the corridors,” says Mathias Stilling.

Getting different study programmes together

“Despite a kick in the shins and the crazy insults shouted in the heat of battle, I am always happy when teams gather at the sidelines, sitting together over a beer afterwards, laughing at how silly people behave on a pitch,” says Mathias Stilling.

The tournament is a way to focus the students from the University of Copenhagen on something other than resistance to education reforms or the stress over academic theories.

University football is of course not just a social thing with beer on the sidelines. Actually, there are study programmes that take this very seriously.

Some study programmes have booked pitches to train on, and train specifically for the tournament. They are so serious that they even organise friendly matches outside the league to stay in shape. Many also have their own facebook pages where they publish results, schedules, etc. and form estimates.

The league is now so firmly established that the season offers several showdowns between arch enemies.

Mathias points to FC Climacussen af 2013 (Theology) to Transcendentalpragmatisk Boldklub (Philosophy) as one of the oldest rivalries. In addition there is the neo-classic face off between Danmarks Drenge(Danish) and B1286 (History).

When Uniavisen contacts Mathias Stilling there are 20 teams registered and still a few days left before the registration deadline.

Among this year’s favorites are last year’s winners, Etnologisk Fodsportslaug af 2012 in addition to Danmark’s Drenge and Intifada FC, and on the lower end of the table are programmes such as Theatre Studies, Religion and Rhetoric.

“So there is a little on every shelf, from the good to the bad – and everyone is welcome,” says Mathias Stilling.

And if you are not interested in playing soccer, you will not be the only one to turn up as a spectator. Some study programmes even have dedicated fan clubs. So far there is only an unofficial start date, 27 October. When registration closes, a tournament plan will be set up. However, this may change if the teams decide to swap time slots with each other to fit in with lectures and so on.

Then the matches will take place Thursday afternoons with beer, heckling, infights and a good mix of sun, rain, sliding tackles and maybe even you?