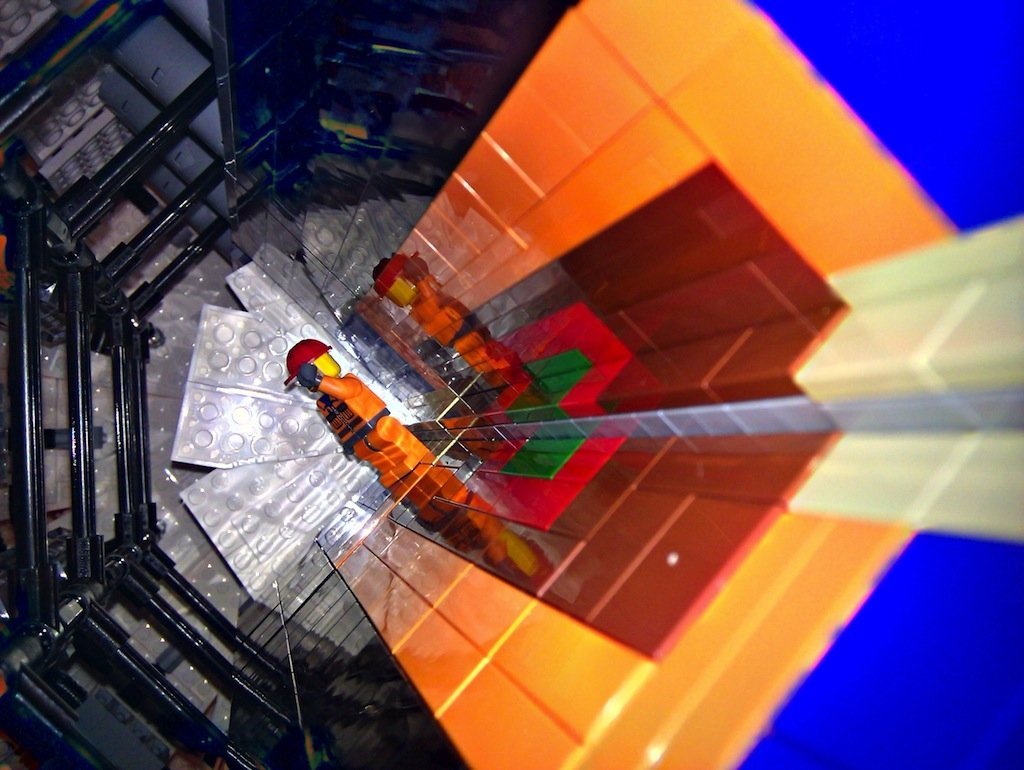 Inside the Atlas detector of the Large Hadron Collider, a lego man is doing some repairs
image: Sasha Mehlhase

Will it find the Higgs particle? Copenhagen physicist has built a model of CERN's atom smasher detector in toy bricks

As we write, scientists are trying to find out whether the elusive Higgs boson particle was glimpsed at the Large Hadron Collider (LHC) in Geneva, fuelling huge excitement. If the particle, also known as the God particle, was actually there, it will make physics history.

The LHC scientists do not yet have enough data to claim a discovery. But in the meantime, at home in Copenhagen, one physicist Sascha Mehlhase from the Niels Bohr Institute has made a part of the collider, the Atlas detector, out of LEGO toy bricks. His LEGO Atlas detector has already become an internet cult phenomenon.

Sascha put in 81 hours of hard work to build the model. He hopes that this novel idea piques the interest of students of all age groups and promotes a healthy interest in Physics.

A model of the experiment may also help in explaining the concept to visitors during events like Copenhagen’s night of culture Kulturnatten.

»It took me about 48 hours to build the 3D model on my laptop and another 33 hours to actually put together all the pieces, this whole process spread out over several weeks,« explains Sascha.

The idea started with some colleagues about a year ago. But then Sascha Mehlhase decided to start over and make a 3D model all by himself.

»During the construction I had some help from students and mostly my wife sorting pieces and assembling small bits. But I guess I spent about 27 hours myself«, he says.

The model is made of 9,500 lego bricks and is about 1:50 in scale. There is no construction manual yet, but there will soon be one, he says on his website. The model is very intricate, even showing the innermost pixel detector.

No plans for world records

This LHC model is placed at the Niels Bohr Institute on Blegdamsvej 17. However, soon there might be other versions located at other places.

»There were moments during the entire process which were not fun, but the overall process was enjoyable and informative«, he says.

However, when asked whether there will be more such models in the future, he only replies with a suspenseful: »Wait to be surprised!«.

No construction manual yet

The raw materials required to the build the LHC model cost about EUR 2,000, funded by the high energy physics group to promote alternative ways of learning.

The company that builds lego bricks (trademarked in capitals as LEGO) has so far not reacted to Professor Mehlhase’s proposal to build the model.

»Unfortunately, LEGO itself has not answered any of my inquires, though I is currently in contact with the Copenhagen LEGO store,« Sascha says, adding that he has no construction manual, yet.