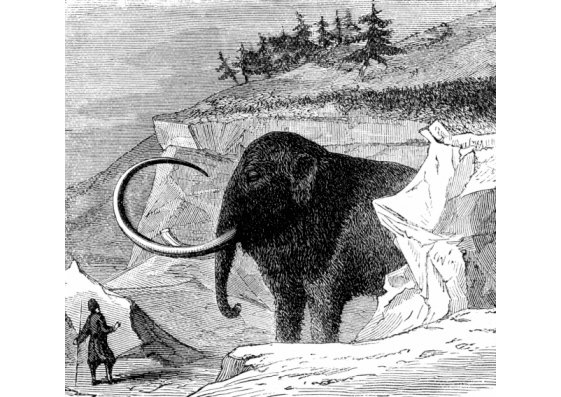 Our photos of woolly mammoths are limited, so in many cases we have to make do with drawings.
image: Photos.com

Woolly mammoths and other megafauna may have traversed the North American plains for much longer than previously thought. Scientists have used break-through methods to date DNA material sealed in Alaskan permafrost

Literally ‘groundbreaking’ techniques have allowed a team of scientists – hailing from the USA, Canada, Australia and Denmark respectively – to date DNA material frozen in the Alaskan permafrost. Mammoths, North American horses and other megafauna may have lived much longer than previously thought. This is according to the news site, Science Daily.

Hard remains of animals are a rare find – not only are they hard to locate, they also have a nasty habit of eroding over time. Eske Willerslev, Director of the Centre for GeoGenetics at the University of Copenhagen and co-authors Ross MacPhee, Curator of Mammalogy at the American Museum of Natural History in New York, Richard Roberts of the University of Wollongong, and Duane Froese of the University of Alberta have been clawing at the frozen soil in Alaska for something to study.

The team dated the last of the mammoths and co. through dirt – frozen ground can preserve fragments of DNA remarkably well.

»In principle, you can take a pinch of dirt collected under favourable circumstances and uncover an amazing amount of forensic evidence regarding what species were on the landscape at the time,« says Eske Willerslev of the University of Copenhagen.

‘Favourable circumstances’ include the north of Siberia and Canada, and in the case of this team of scientists, Stevens Village on the bank of the Yukon River was the ideal spot, where genetic fossils were sealed in undisturbed Alaskan permafrost soon after they were deposited.

The condition of the DNA found allowed for two independent types of dating – radiocarbon and optically stimulated luminescence.

»With these two techniques, we can be confident that the deposits from which the DNA was recovered haven’t been contaminated since these lost giants last passed this way,« said Roberts, director of the Centre for Archaeological Science at the University of Wollongong. »It’s a genetic graveyard, frozen in time.«

The cores of frozen soil collected by the team provide a clear picture of the Alaskan fauna at the end of the last ice age. The oldest remains dated back 11,000 years, but one core, from 7,600 and 10,500 years ago, finally confirmed the presence of mammoth and horse DNA.

To ensure the integrity of the sample, the team extensively sampled the surface soil around Stevens Village. No trace of extinct species’ DNA were found, supporting previous research suggesting that DNA degrades rapidly when exposed to sunlight and different chemical reactions.

»The fact that we scored with only one layer is not surprising,« says MacPhee. »When you start going extinct, there will be fewer and fewer feet on the ground, and thus less and less source material for ancient DNA such as faeces, shed dermal tissues, and decaying bodies.«

»Dirt DNA has lots of exciting potential to contribute to extinction debates in other parts of the world too, as well as a range of archaeological questions,« said Willerslev, »we can also use it to make a list of modern species living in any particular location,« he said.

»This kind of information is really valuable for studies of animals that are hard to detect, and there are some neat forensic applications too.«