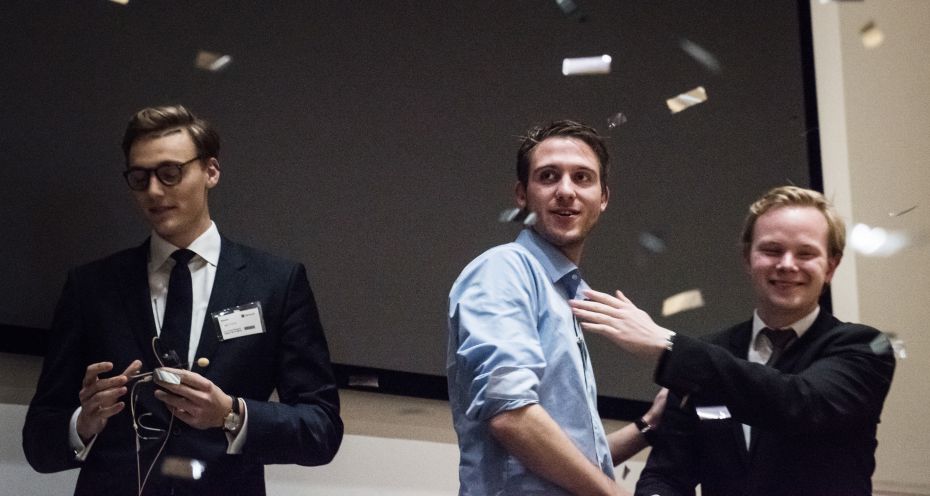 This is what it looked like when master’s student Mathias Heinze (in the blue shirt) had typed his way to the Danish Excel championship
image: Ida Marie Odgaard/Scanpix

He is the best in Denmark at working with a spreadsheet and he is heading for the World Cup. Political science student Mathias explains why he has so much fun on Excel, that he can easily spend 14 hours a day on it

Mathias Heinze sits in a cone of light in the Copenhagen night. The time is 4:17 am, and he has worked for eight hours straight. It is Excel that makes time stand still for him. He is messing with an algorithm that is to be programmed, even though he really ought to be writing a paper. But for Mathias Heinze, Excel is just so much more fun.

Yes, sir. The spreadsheet is the 27-year-old political science student’s biggest passion. Mathias Heinze is in the process of writing his thesis, so for a time he has limited his Excel quota to just 5-10 hours a week. In the past, when he had permanent student job, he could be working in the programme for up to 14 hours a day.

“It was great fun, when I really had the time to do it. You can take as many courses as you want through your academic union, but it requires many consecutive hours of work to get really good at Excel,” he says.

Mathias Heinze is Danish champion in Excel. And he is to represent Denmark when the first World Cup in Excel takes place in early 2017. The date has not yet been set precisely, he says, but it will take place online.

There has been a Danish championships in Excel twice. The last time, in November 2016, the three finalists got an hour to prove themselves in three disciplines named after the world of athletics and dance: 100 metres spreadsheet, graph ballet and formula wrestling.

In the 100 metres spreadsheet you had to demonstrate your abilities in structuring, configuring and manipulating data. Graph ballet is about visualizing data to tell a story in an interesting way, and in formula wrestling, you use formulas to solve the challenges that pop up when the data changes.

Mathias Heinze is especially strong in formula construction and in the handling of large amounts of data, whereas his graph work is a bit sloppy, he says. When asked about his preparations for the World Cup, he replies:

“Unfortunately, because of the thesis, I don’t have the time to work with Excel all day long. But I keep myself fit by being present on online Excel fora solving people’s challenges for them. My preparations consist in ensuring that no task can surprise me. I achieve this best by having as many features at my fingertips as possible.”

He reiterates: “It all comes down to practical exercise – lots of it.”

Mathias Heinze has always found technical subjects easy. But he is not the type to associate numbers with colours or shapes, and he cannot recite ‘pi’ to a large number of decimals.

“I have no autistic abilities. I think if there’s anything special about me, then it’s just that I’m ready at times to spend all my time on Excel.”

He started getting fired up about Excel in high school, where Mathias Heinze quickly realized that he could be really good at it, while being entertained at the same time:

“It’s about the pure logic of the programme. One side of me is attracted by the logic, the rigour and the formal reasoning. Excel is like a microcosm that is cleared of all the real complexity of the world. Something is either true or false. The social world is almost never that simple, but when I’m working in Excel, it is precisely this simplification of the complexity that is the appealing thing.”

Not your usual political scientist

When Mathias Heinze chose to start university eleven semesters ago, he opted for international politics and the EU. Back then, he dreamed of working with diplomacy. Since then, his interests have changed, and he has spent most of his elective courses studying statistics with economists. He also followed a physics subject ‘for fun’.

“My leisure interests are also quite atypical for a political science student. I spend my time teaching myself different programming languages. Sometimes I also get time to play Dota 2, an online computer game. I just feel really comfortable in front of a computer,” says Mathias Heinze.

“Unfortunately, because of the thesis I don’t have the time to work with Excel all day long” – Mathias Heinze on his World Cup preparations

When he logs off, he reads Sherlock Holmes or immerses himself in the universe of the horror master Lovecraft. He is also in a board game club, where they meet up now and again for a ‘very passionate’ round of Game of Thrones.

Masters in political science typically blend into the civil service and are often considered to be impractical. This cannot be said of Mathias Heinze, who has already had loads of real jobs.

After high school he and a companion did Excel consulting work for small businesses, such as artisans and florists. As a student assistant, he has built tools in Excel for Saxo Bank. He has also instructed a few Excel courses including courses at CBS and the Faculty of Social Sciences. Today, he is a research assistant on a research project between the University of Copenhagen and Aalborg University, and he has just delivered his PhD application to a number of US universities, including NYU, MIT and Chicago

Besides the flashy honour, the world champion in Excel gets to win a visit to the Microsoft headquarters in Seattle, where he will have meetings with Excel developers and will provide input on new features of the spreadsheet.

“It would be so cool,” says Mathias, who does not dare predict his chances in the numbers tournament:

“I can progress from the first round and place myself in the top three, but I think I will be careful and not aim higher than that. If other countries can field professional Excel consultants with decades of experience, then this weakens my chances.”

“I can progress from the first round and place myself in the top three,” – Mathias Heinze about his chances of winning the World Cup

Here is a nerd alert.

Because if Mathias Heinze wins, he wants to forward the following recommendations to the developers in Seattle:

• Optimization of the formula bar for conditional formatting and for the pivot table calculation field, including syntax highlighting.
• Enhanced IF function, so the value of the logical test returns when the result is TRUE.
• More options for array calculations, including nested array functionality and empty array functions.
• Matrix programming as part of VBA.

These tips is hereby passed on.