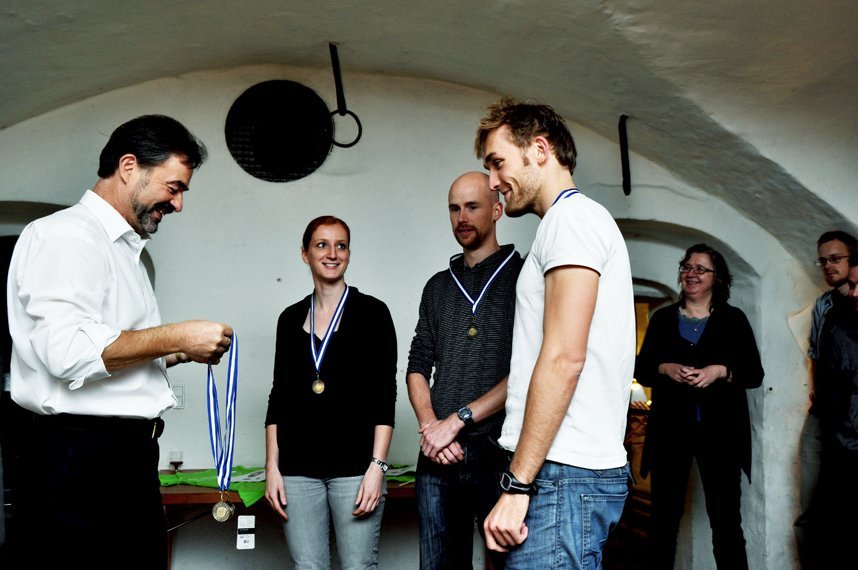 The fastest mixed team recieve their medals at the ceremony from University of Copenhagen director Jørgen Honoré
image: Andrew Bartle

It was no time for modesty. As four teams of staff and students lined up to get their University of Copenhagen DHL medals and trophies, the talk among participants was all about times and how to defend titles come next year.

The University of Copenhagen fielded 2160 participants and 428 teams at this year’s DHL relay. All competing for their department’s bragging rights. The DHL relay is considered the largest fun-run in Northern-Europe, some say the world, with 100,000 participants over five days.

Even university director Jørgen Honoré, awarding the medals at the ceremony, got caught up in it, as he commented positively on the new bright green University of Copenhagen running T-shirts.

Gets people together, and healthy too

He himself is a runner, and took part in the DHL, and »I had this T-shirt on this morning, on my run, as I try to keep up with you guys«.

»Here is something that gets staff together, and is healthy, at the same time,« Jørgen Honoré said.

No room for complacency

Chembio 1 from the Institute of Medicinal Chemistry was the hottest topic of the day, getting awards for the titles of ‘Fastest Men’s Team’ and ‘Fastest Overall Team’ with a winning time of 1:37 for the five times five kilometres. Teammates Niels Grøn Nørager, Klaus Bertram Nissen, Jonas Nil Eildal and Theis Wilbek were clearly delighted to receive their medals (see photo gallery).

See a post-race interview with one of the team members here.

They need not be complacent however. Fastest mixed team, the Systems Biology team of the Institute of Biomedicine, was only one minute behind in 1:38.

Fastest women’s team was Chip 1, otherwise known as Copenhagen HIV Programme/ISIM, and they were no slouches either. They raced past through the finish in 2:06, (an average of just over 25 minutes, we did the math…)

Big surprise for some, but maybe not for insiders and DHL relay analysts, was the University Post team. Our team now holds the trophy of ‘Central administration’s Fastest’ and will hold the trophy proudly until next year.

University director Jørgen Honoré was quick to grasp the symbolism of the international team of the University Post outsprinting the newspaper’s Danish section Universitetsavisen.

»Am I to understand that this is the international section University Post that has beaten the Danish section?«, he asked.

When this was confirmed by an eager University Post team, Jørgen Honoré responded:

»The ‘Universitetsavisen’ has always been on their toes. Now this is my promise. If they are just as sharp as the University Post next year, I will make sure that they get their own trophy too…«