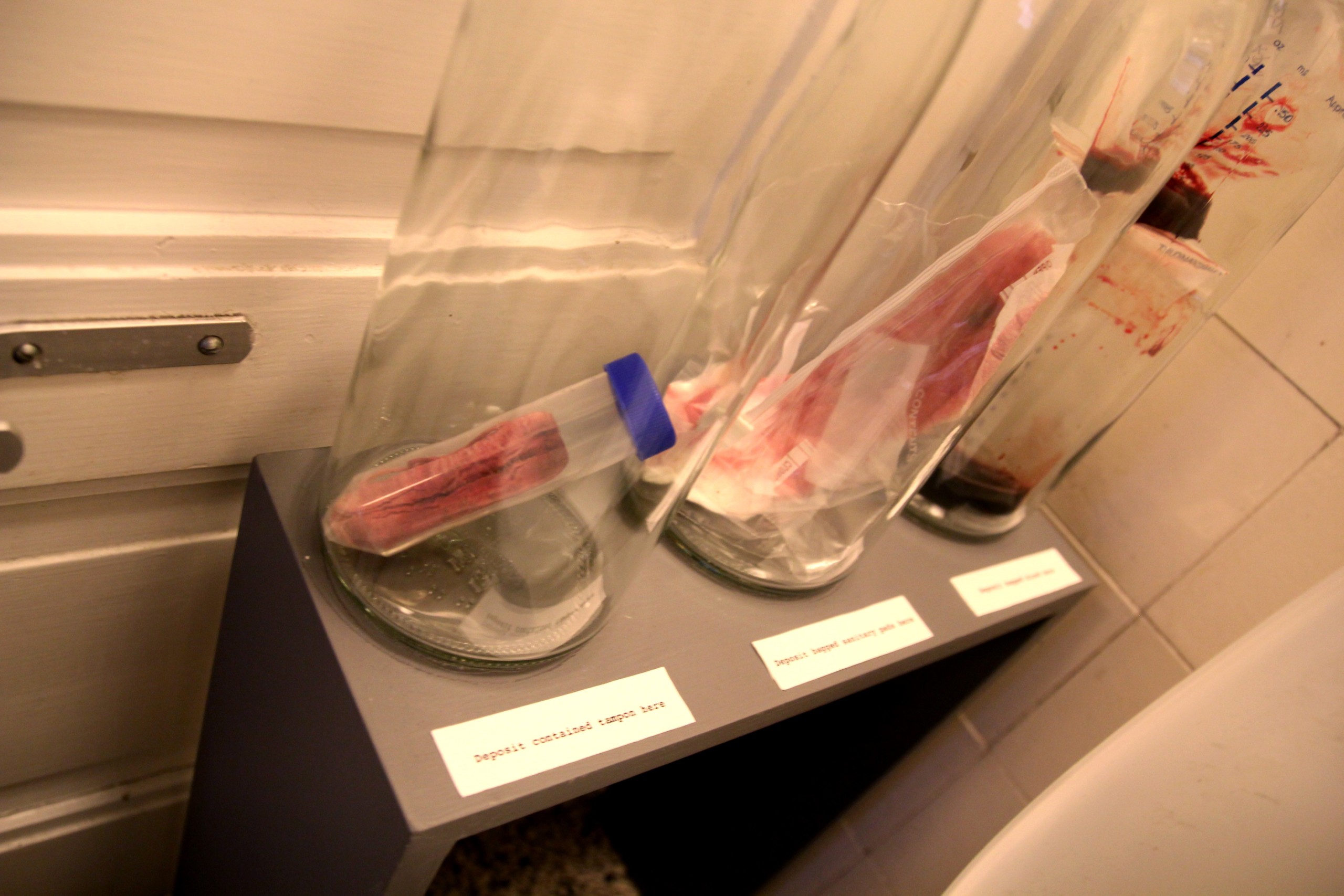 Female delegates were given the opportunity to donate their menstrual blood in various forms during the conference
image: Johan Klokhøj

Gender researchers met up to discuss materialism, and to blend art and science with a provocative happening

Menstruation. What is it about the word that makes us all (yes, even the women among us) feel awkward?

At a Feminist Materialisms conference held this past April, visiting researchers Miriam Wistreich and Alexandra Jönsson blended science and art in an attempt to lighten the mood around the dreaded ‘time of the month’ and explain its significance in gender discourse:

In a women’s bathroom in a basement beneath the conference Wistreich and Jönsson presented their installation ‘A Material Conversation’ (you can still go and see it. More details here).

To the right side of the toilet hang three average looking plastic bags. They contain different containers: one for fresh blood, one for sanitary pads, and one for tampons. After choosing one of the bags, guests are asked to deliver their blood to the left of the toilet where three oversized jam jars hold the contents of previous visitors. After the visit the ‘donors’ can fill out a piece of paper with the details of their donation.

The idea for the installation came while Wistreich was doing her Master’s in Interactive Media at Goldsmith’s University in London. One day after a seminar, she wanted to discuss menstruation with her fellow students.

»I was met with a wall of silence. No one wanted to talk about it. Menstruation is taboo. I knew then that it would be interesting to research,« says Wistreich. One year later Wistreich met Jönsson, and together they started to develop a platform where anyone interested could discuss menstruation’s meaning in relation to gender issues.

The project raises a lot more questions, than it gives answers: When is blood a part of the body? When is it something eise? What happens when, instead of going down the drain, the blood functions as fertilizer for a garden growing vegetables for a dinner for the installation’s participants?

The menstruation dinner fuelled the debate that took place at one of the workshops held at the Feminist Materialism conference, where the installation was presented.

»I would like to determine where my blood should be used as fertilizer, and which vegetables that grow from it. The blood is still me,« said one of the donors to the project. Wistreich suggested, jokingly, that tomatoes act as the perfect menstruation vegetable.

Finding the meaning of menstruation

Jönsson and Wistreich’s blog has already had over 3,000 visitors from those interested in gender studies. If you missed the conference and want to check out some of the specimens or join the gender discourse click here.