Minister: Danish universities should ‘reach for the stars‘ 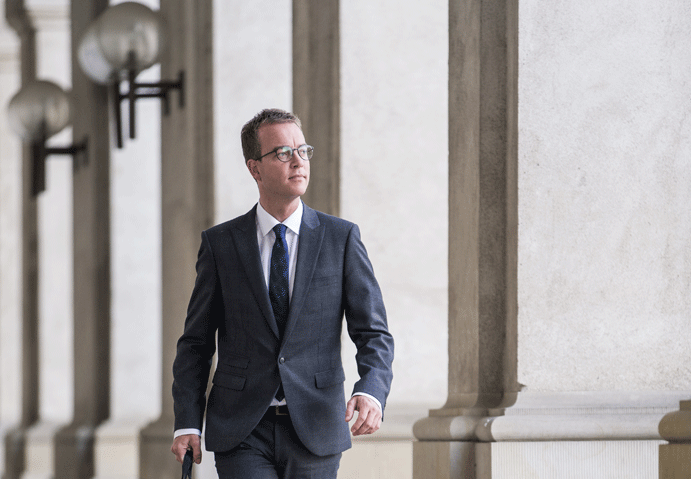 He presides over cuts to education and research. But Denmark is, and should strive to be, a ‘knowledge society’, says the Minister of Education and Research in an exclusive interview with the University Post

There has probably been no other government minister in Danish higher education history who has set up office embroiled in so much noise and controversy.

Minister of Education and Research Esben Lunde Larsen, a PhD in theology from the University of Copenhagen, has been lampooned by the media for his belief in God and a university background that included credit from a bible school in Norway.

His PhD dissertation is now being examined by a university committee to ascertain whether it included a shoddy use of citation. He is of a centre right Danish government that is making substantial cuts to the funding of higher education and research.

Yet despite all this acrimony, his views on the generous Danish study grant system, internationalization and Danish universities are surprisingly moderate. To the University Post he expresses views that are in line with a consensus of political parties on what Denmark should be doing with its students, its education, and its research.

SU is not just a study grant

Take the concept of student grants for example. Denmark has one of the most generous study grant (SU) systems in Europe. Critics such as the OECD say it costs the taxpayer too much. Others say that the system is out of line with European standards, makes Danish students stay too long at university, and attracts international students for all the wrong reasons. A 2013 EU ruling forced the Danish government to allow access to international students, and the Danish government gives them access so long as they also work in Denmark.

So the University Post asked Esben Lunde Larsen: Why on earth is the Danish government choosing to cut research and education funding, while maintaining a generous government support to Danish students in the form of study grants?

“First of all let me emphasise that we still have an excellent research and education system. But I will not automatically reject any new ideas that come to my office regarding a change to the SU.”

You have to “remember that the Danish student grant system has a wider role to play in a Danish framework,” he says. And it cannot be isolated from policies on benefits, housing and other policies relevant for students.

Students should come for the studies, not the benefits

Any change would also have to make sure that students don’t drop out, and that they are able to continue with their studies, he explains, as the retention of students, both in studies and in labour markets is also important.

“For me it is very important that we have international students in Denmark. And I have an ambition that more Danish students should go abroad.”

And as for other European students getting the rights to Danish SU benefits? Well, it cannot be isolated from the wider issue of benefits, social and otherwise, among EU states, explain Esben Lunde Larsen.

“SU belongs to a broader question about social benefits,” he says. But adds that ideally the EU should have a system where students and citizens don’t move for the benefits, but for reasons such as study programmes and jobs.

Universities can do more to attract internationals

Work to make language not an issue

Danish businesses, and the large Danish public sector, are not good at hiring international talent. Esben Lunde Larsen has a few ideas about how they could be better.

“Danish businesses can recruit students for internships, be present at international gatherings, and show the students what Danish companies can do for them after their education. Municipalities, and the regions that run hospitals, should show students why it is attractive, say, to become a nurse here,” says Esben Lunde Larsen, adding that the barrier of the Danish language should be overcome.

“It is a challenge to work as, say, a nurse if you don’t speak the language, but that is why it’s important to discover ways where we can integrate in a way that language won’t be an issue.”

Balance not the main goal

The plan to take up more international students into the Danish labour market is actually in line with another Danish government policy, to move state jobs away from the capital city.

“I think it can be easier after your education to get a good job in a rural area, and it is very important that businesses there also make themselves better at taking on international students.”

Successive Danish governments, left and right of centre, have strived to internationalise Danish universities. But in recent years, universities have been placed under increasing supervision for not maintaining a balance between incoming (international) and outgoing (Danish) students. A recent so-called study progress reform [fremdriftsreform, ed.] speeding up students at university, could reduce the numbers of Danes opting to go abroad, by default forcing the international intake down also.

“We have an attractive society to stay in [from the perspective of an international student, ed.]. And in my opinion this element is not used enough by universities to attract students. And as for the balance, this is important, but the balance is not a goal in itself.”

Knowledge society or not?

29 September 2015 is a date that Danish universities will surely remember. On this day, the Danish government announced plans for a budget that cut back on funding to research councils and the money universities get to educate students. Instead the money would go to things like better hospitals and a tax allowance for home improvements.

Esben Lunde Larsen is the minister that is presiding over the research and education cuts, and called Danish universities ‘bloated’ when he took over office in the summer of 2015.

Esben Lunde Larsen: “I really do believe that higher education and innovation are fundamental necessities for growth …”

In recent decades, successive Danish governments, left and right of centre, have said that Denmark should strive to be at the forefront of the knowledge society – a ‘vidensamfund’. In Denmark, there is not much land, not much labour. It is knowledge that is the primary resource.

Need to be aware of outputs

But despite everything, despite the cutbacks, Esben Lunde Larsen disagrees. The concept is still relevant, and it still informs policy.

“I really do believe that higher education and innovation are fundamental necessities for growth, and that is why we continue to spend more than one per cent of GDP in research and development. We have a very strong ambition for this area. But what we do need to be more aware of is what the outputs are of this research,” he says to the University Post.

“We need the level of research that we have, also in businesses,” he says.

“That is why we have cancelled the previous governments agenda of having 25 per cent of young people taking a higher education. It is just as important for us that we have youngsters taking other forms of education.”

Can be the best – within certain areas

Danish universities rank well on international league tables and have in recent years stated their ambition to do even better, with University of Copenhagen managers even stating that the university should strive to be like top-ranked research-universities such as Berkeley.

Esben Lunde Larsen: “I think every university should reach for the stars. But be aware that you cannot be an elite university in all areas. We must always take care to be reasonable about the use of ressources to achieve that end.”

With the recent cuts to research and education, the perception among Danish universities at least is that the present government is anti-university. So it is interesting to know whether the Minister for Higher Education and Research has the same high ambitions for them that they have themselves. Should Danish universities, being mostly taxpayer financed, now be more humble, and just fulfill their education mission?

“Universities should have ambitions like this in certain areas. We can’t have Ivy League-level universities in all areas. Danish universities can be among the best in certain topics, but no matter what topic or research area, it must always be the goal to seek for the highest level.”

Cannot be elite in everything

Do you and your ministry regularly look at rankings and league tables?
“Yes I do, and yes we do”.

Which rankings?
“I am not going to tell you which!” he laughs, then continues.

“I think every university should reach for the stars. But you cannot be an elite university in all areas. We must always take care to be reasonable about the use of ressources to achieve that end.”