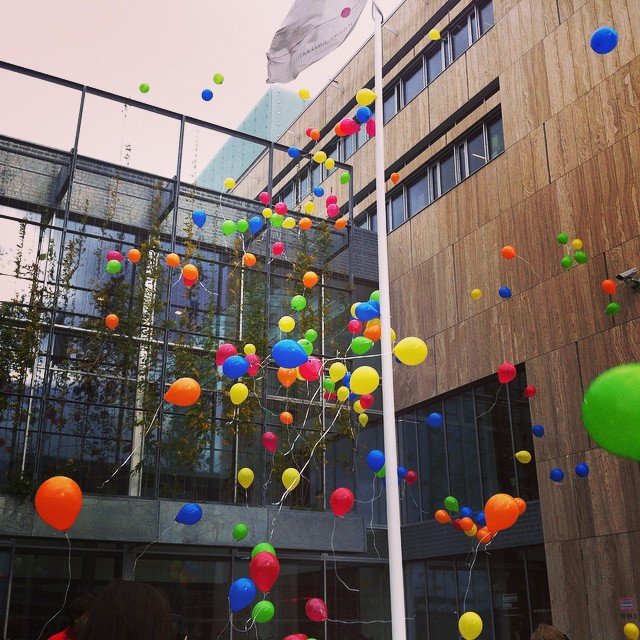 From Monday's protests at the Faculty of Humanities department. Each baloon represents a study spot lost. Reform will hit the humanities subjects hard
image: Seraina Nett

An international petition against Danish education reforms now has more than 1,700 signatures. Words of solidarity and support from established academics

The list of signatures and comments is in response to a proposal by Minister for Higher Education and Science Sofie Carsten Nielsen to reduce student intake on programmes with higher unemployment levels. The plan will hit humanities subjects hard, and the University of Copenhagen has warned that it could wipe out several smaller subjects.

“For large subjects, such a cut is difficult but not life-threatening. For numerous smaller subjects (e.g. many disciplines within Asian, Middle Eastern, Russian and East European Studies, Balkan Studies, Ancient Near Eastern Archaeology, Religious Studies, Arctic and American Indian Studies) the implementation of these plans would be disastrous,” says Jan-Ulrich Sobisch, an associate professor for Tibetan Studies at the Department of Cross-Cultural and Regional Studies (ToRs) University of Copenhagen who authored the petition.

“We appeal to our colleagues internationally to voice their concern about this unprecedented, large-scale attack on the humanities in Denmark,” he adds. “If implemented, the planned cuts would lead to a serious impoverishment of the Danish and Scandinavian academic landscape and to the irreversible disappearance of highly specialized expertise at a time when it is most needed,” Jan-Ullrich writes.

Richard Gombrich is Professor of Sanskrit at the University of Oxford in the UK, and is one of the 1,700 + international petitioners who had signed the petition at time of writing: “I hate to see a civilised country like Denmark committing cultural suicide. If the minister thinks that education is too expensive, has she assessed the cost of ignorance?”

Professor Richard Nance of the Department of Central Eurasian Studies, Bloomington, United States writes that “the threatened loss is not just Denmark’s, though that loss would be grave enough. The loss is global. We eliminate the humanities at our collective peril.”

Petition organiser Jan-Ulrich Sobisch says to the University Post that the purpose of the petition is to raise awareness. Publicity is needed, he says. “The public should know what is going on – especially those people with influence”.

“Once for instance a language based study program is closed down, it will take more than a decade to revive it. To create a knowledge base as we have it at ToRS takes several decades.”