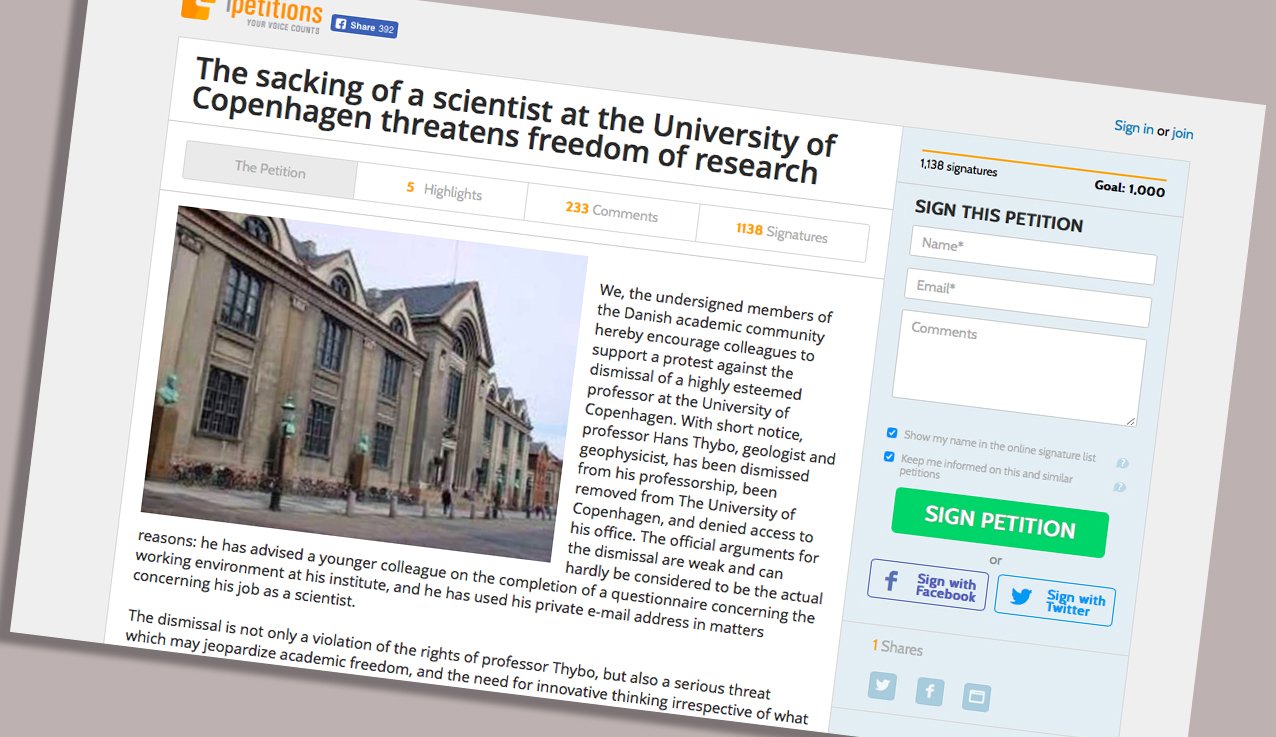 Scientists from throughout the world are signing a protest against the sacking of Hans Thybo, which they call a 'threat to academic freedom'. Controversies like the Thybo case may affect the University's ranking position, says THE-ranking editor

In less than a week, just over 1,100 people have signed a statement that the sacking of Professor of Geology Hans Thybo from the University of Copenhagen (UCPH) is a threat to academic freedom.

»The dismissal is not only a violation of the rights of professor Thybo, but also a serious threat which may jeopardize academic freedom, and the need for innovative thinking irrespective of what the institutional leadership wants. If the dismissal is not retracted, it may create anxiety in academic circles at the University of Copenhagen and elsewhere. We therefore urge colleagues in Denmark and abroad to support this protest by signing the following petition, addressed to the management of the University of Copenhagen,« write the organisers of the petition.

The call to support Thybo is addressed to “colleagues” and the Danish organizers are a group of high profile professors from various UCPH disciplines: Frans Gregersen, Lene Koch, Niels Kærgaard, Bente Klarlund Pedersen, Ditlev Tamm and Ole Wæver. They are all people who have not previously committed themselves publicly in the debate over Hans Thybo.

Protests from all over the world

About a third of the signatories are Danish, the rest from nearly half a hundred countries. In the comments field, several hundred of the petitioners express their viewpoints.

“It is shocking that we hear such story from Denmark … “

(The University Post has not verified the comments samples on the petition, but a google search shows that the names Maarten de Wit and Khalil Motaghi correspond to a South African geo-professor and an Iranian geo-lecturer respectively.)

The University of Copenhagen has started to negotiate “an amicable solution” to the Hans Thybo case after the Danish Association of Masters and PhDs union took up the case.

This is according to Vice Director for Communications at UCPH Jasper Steen Winkel in a comment on Uniavisen.dk.

UCPH management would not comment on the content of this negotiation, including a comment on what exactly is on the negotiating table. But according to the Magisterbladet magazine this could “mean that Hans Thybo takes another job at the University, where he can continue his research activities.”

In his comment Jasper Steen Winkel calls on people to leave the parties alone so they can carry out their negotiations in peace.

24,000 geoscientists to discuss Thybo and UCPH this week

But peace is not exactly on the upcoming agenda in the controversial dismissal case.

The primary reason behind dismissing Hans Thybo was that he abused his position to pressure a postdoc researcher to respond in a specific manner in a workplace assessment survey. But in the past week, this justification for firing him was undermined by the journal Nature, quoting the post doc saying that he did not in fact feel any pressure.

To add to this, 24,000 geoscientists will be meetung up in the days 12th-16th December at a major conference in San Francisco, USA. The Hans Thybo case could well be a topic. This is according to Professor Nicholas Arndt, Université Grenoble Alpes, one of the signatories of another Thybo petition directed to the University’s Rector’s Office and Board of Directors, previously reported on University Post.

The discussion over the Hans Thybo dismissal case may have implications for the University of Copenhagen’s position on international rankings.

In the wake of a comprehensive round of dismissals in early 2016, the University of Copenhagen dropped 38 spots on the key THE-ranking, which Phil Baty, editor of Times Higher Education World University Rankings then attributed to “large budget cuts in the past year.”

Phil Baty states in an e-mail to the University Post that the THE rankings are based on 13 individual performance targets covering all the university’s important activities. Baty writes that he cannot comment on the Hans Thybo case or foresee the consequences of a controversy like it.

“But THE performs an annual survey of academic reputation, where we ask about 10,000 significant scientists from around the world to subjectively assess which institutions are the leading ones.”

“Even though this study is based on each of the researchers’ particular expertise, it is clearly possible that public controversies of this kind can affect the perception of an institution.”